The philosophy of BOND, founded by California vintner H. William Harlan, is to offer wines from vineyards that highlight very specific sites in Napa Valley. William Harlan, owner of Harlan Estates noticed some vineyards usued for his flagship estate were distinct enough to be bottled on their own, as single vineyards. This inspired him to found Bond Estates. Today, five sites have been carefully selected to best express the richness of Cabernet Sauvignon. These five sites have been named "the grand crus of Napa" by Harlan.

Each of the five BOND sites is quite small (between 7 and 11 acres in size), producing roughly 450 to 600 cases annually. While the company does not actually own the vineyards, BOND Estates does maintain total viticultural control over them, with the winegrowing directed by Bob Levy. The fruit is purchased under "evergreen contracts" which are renewned each year.

BOND wines are produced with the aim to reflect the unique terroir from which they came. The lower-altitude Melbury vineyard, with its clay-based soils, produces elegant Cabernet Sauvignon wines with rich spice and violet fragrances. The Pluribus vineyard, planted at 1,100 to 1,300 feet above sea level on Spring Mountain is characterized by its volcanic bedrock and surrounding conifer forest, which lends a touch of cedar to the finished wines. The Quella vineyard, situated on a riverbed, is home to cobble and rock, along with tufa soils and produces very structured wines with a touch of salinity. The vines of the St. Eden vineyard stretch their roots into iron-rich, rocky soils at lower elevations of 145 to 188 feet, producing very precise wines with great acidity and concentrated flavors. And finaly, the Vecina vineyard is planted on terraced slopes of volcanic soil, producing beautifully layered wines with a high concentration of tannins.

Since 2001, Mary Maher has been vineyard manager, and has introduced the use of biodynamic mulch in the BOND Estates vineyards. Irrigation has also gradually been phased out, which has resulted in riper, more mature tannins and flavor in the wines.

2017 marked the 20th anniversary of BOND estates project designed by influential Napa Valley vintner Bill Harlan to showcase the incredible versatility of the Cabernet Sauvignon grape, the most popular variety in Napa Valley’s great terroirs. The estate’s five distinct sites are beautifully represented by five premium wines, each expressing a unique personality and profile derived from its place of origin. 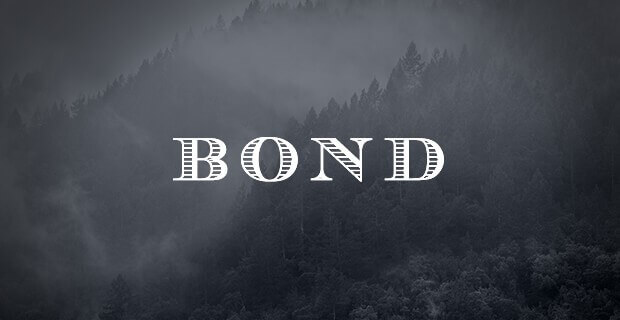 The Beginning of BOND Estates

The story of BOND Estates is the story of famous California vintner Bill Harlan. In 1983, Harlan founded Merryvale Vineyards in collaboration with his real estate partners. He appointed Bob Levy as winemaker, and later took on Swiss businessman Jack Schlatter as an additional partner. The first wines of Merryvale were made at the nearby Rombauer Vineyards winery, until Harlan constructed a new winery in St. Helena, just in time for the 1989 vintage. In 1984, Harlan began expanding his vineyard holdings with the purchase of a 40-acre plot near Oakville. This property would one day become the legendary Harlan Estates. Over the course of the next few years, he added 200 acres to this property. Initially sourcing fruit from 60 local vine growers, Harlan eventually declassified his own fruit and began producing a wine named Oakville Grade. This wine was later renamed The Maiden and made availed under the Harlan label.

Following a period of great success, the owners of Merryvale bought out Harlan, who invited the vineyard owners to become part of the BOND project. The inaugural 1997 vintage of BOND was vinified in the Harlan Estate's winery, alongside the Harlan flagship cuvee. Just 3 years later and just in time for the 2000 harvest, a brand new winery was constructed and fully dedicated to the wines of the BOND project. Over time, the brand portfolio expanded to include five wines, each vinified separately from five different vineyards, which Harlan calls “the grand crus of Napa.”

The five single-vineyard and single-variety Cabernet Sauvignon wines in the BOND Estates portfolio come from five signature sites, each located on a hillside in California’s Napa Valley. The vineyards are quite small, between 7 and 11 acres in size, and each one produces between 450 to 600 cases per year. Although BOND Estates maintains complete viticultural control over these parcels (the winegrowing directed by Bob Levy), the company does not own them. Instead, the fruit is purchased under "evergreen contracts," which are renewed on a yearly basis. To understand the personality of these five flagship cuvees, it is important to first get to know the landscapes from which they come.

Mary Maher joined the BOND team in 2001, taking over from David Abreu as BOND’s new in-house vineyard manager. Under her leadership, the team has adopted various techniques to grow grapes in a way that encourages the most genuine expression of terroir. These techniques include "crimping" the grass (cutting it in a certain way) to prevent it from absorbing too much water. This reduces the temperature of the soil and preserves moisture. Maher also introduced biodynamic mulch with which to nourish the soil’s microbiological ecosystem. Irrigation has gradually been phased out, resulting in a greater maturity of tannins and flavour in the finished wines. Dry farming has also encouraged the development of the vine root systems.

The Cabernet Sauvignon wines included the BOND portfolio are produced in a way to most clearly showcases each terroir of origin. At the BOND winery, the grapes undergo spontaneous fermentation (mostly in barrels), at temperatures of 78 to 82° F. The team carries out four pump-overs per day, along with some punch-downs during the peak of the fermentation process. The maceration is long, allowing for the greatest extraction of natural colour and tannins from the skin, while the length of the post-fermentation maceration depends on the personality of each plot in a given vintage.

The grapes of each property are picked in batches, with the timing of the harvest depending on levels of ripeness. These batches are vinified separately and then matured in oak barrels (almost all new, from Taransaud, Darnajou and Sylvain). The base wines are blended to produce the final wine. While 60% of the grapes harvested from the 5 BOND sites are used to produce the estates 5 wines, 20%-25% is sold in bulk. The remainder goes into a special blend named BOND Matriarch.