Mount Eden Vineyards is a small historic wine estate at an elevation of 2000 feet on the Santa Cruz Mountains. Founded in 1945, it is recognized as one of the original boutique California...Read More

Mount Eden Vineyards: An Icon in the History of Californian Wine 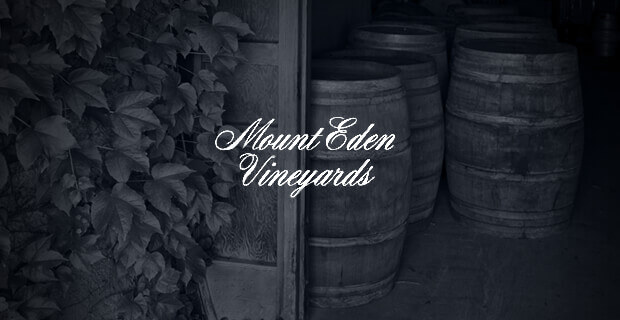 Few wineries in California can claim the kind of heritage enjoyed by Mount Eden Vineyards, located at an altitude of 2,000 feet in the Santa Cruz Mountain AVA. Founded in 1945, the estate is home to vines whose lineage can be traced back to the greatest crus of Burgundy and Bordeaux. Since his arrival at Mount Eden, Jeffrey Patterson and his wife Ellie have dedicated their lives to production of pure, expressive and authentic Chardonnay, Pinot Noir and Cabernet Sauvignon, wines that evoke in every sip the characteristics of this special terroir.

The story of Mount Eden Vineyards, considered one of the most emblematic Californian wine estates, actually begins with a French man by the name of Paul Masson. Originally from Burgundy, Masson travelled to California in 1878 and, inspired by the future he saw in the local terroir, he returned to try his luck as a winemaker. Eventually, Masson purchased 573 acres of land in Saratoga and named the property La Cresta, planting Pinot Noir and Chardonnay cuttings brought over from Burgundy on 60 acres, with the intention of producing sparkling wines using the method traditionnelle.

At one point, Masson developed a friendship with Martin Ray, who grew up next to the property and eventually ended up working in the cellar. Following Masson’s advice, Ray purchased a parcel of land on the mountaintop that is now home to Mount Eden Vineyards. In 1943, he began the back-breaking task of planting Pinot Noir and Chardonnay vines on the property located at a lofty elevation of 2,000 feet, using cuttings from Masson’s La Cresta vineyard. He focused on small production varietal wines, going against the trend of big Bordeaux-style blends that was prevalent at the time. Truly a man of the land, Ray constructed a residence with a cellar underneath on the peak of the mountain, where he lived with his wife, surrounded by 3 acres of Pinot Noir, 7 acres of Chardonnay and 1 acre of Cabernet Sauvignon. In the 1960’s Ray established a partnership to help finance the estate, but by 1970’s he failed out of that partnership and lost the property to investors, who renamed it Mount Eden Vineyards.

In 1981, the partners hired Jeffrey Patterson, a Native Californian, graduate of UC Berkeley and avid enthusiast of the Bay Area food and wine scene of the 1970’s, as assistant winemaker. Patterson and his wife Ellie moved into the cottage originally built by Martin Ray in the 1950’s. In 1983, Patterson was promoted to winemaker and Ellie was hired to manage the marketing and financial side of the company. From that point on, the young winemaker replanted many of the original Chardonnay and Cabernet vineyards, which had become unproductive. He spent the next decade experimenting with new trellising and canopy management methods to improve the quality of the wines, bringing to life the dreams that Martin Ray initially had for the property.

By the 2000’s, the vineyards were replanted to contain 7 acres of Pinot Noir, 20 acres of Chardonnay and 13 acres of Bordeaux varieties. Due to higher yield, Patterson decided to create a Saratoga Cuvée line, starting with some estate Cabernet Sauvignon grapes and some sourced from growers around Saratoga. He also decided to differentiate between fruit-forward Chardonnay (which would go into the Saratoga Cuvee) and the Estate Chardonnay, the latter of which came to enjoy great success after being named Top 100 Wines of the Year by Wine Spectator for 5 different vintages. In 2007, the company acquired a property on a neighboring mountaintop, previously called Cinnabar and developed by Tom Mudd in 1983. This property, which included a modern tank room and caves, was renamed Domaine Eden and shortly after, the Saratoga Cuvée was renamed Domaine Eden.

After 30 years of slowly obtaining shares in the winery, Jeffrey and Ellie Patterson acquired majority share in 2008, thereby ensuring that Mount Eden Vineyard would continue as a family business in the future. The couple still live on the property today, 2,000 feet above the Santa Clara Valley, and have raised their two children there as well.

Mount Eden Vineyards: A Legendary Terroir High Up in the Santa Cruz Mountains

Mount Eden Vineyards is situated in the Santa Cruz Mountain Appellation, which was recognized as an AVA in 1981. The climate of vineyards in this region is largely defined by their location relative to the fog characterizing this area, which during spring and summer months is at around 600 to 1,000 feet up the mountain. Vineyards below the fog line tend to enjoy cool, moist conditions, while those above it see more sunlight and are typically dryer. Mount Eden, situated at 2,000 feet above the sea level, falls into the second category. Nevertheless, the temperature here is also moderated by the proximity of the property to the Pacific Ocean (15 miles away), which slows down the ripening process of the grapes. The combination of abundant sunlight, lack of fog or frost and moderate temperatures throughout the summer allows for a gradual, steady concentration of flavors in the fruit.

Today, the Mount Eden Vineyards estate comprises over 40 acres of Chardonnay, Pinot Noir, Cabernet Sauvignon, Merlot and Cabernet Franc vines. The lineage of the Chardonnay and Pinot Noir plants extend back to those first brought over from Burgundy by Paul Masson in 1900. The Cabernet Sauvignon was planted from cutting from Emmet Rixford’s La Questa Vineyard in Woodside, California. The vines are dry-farmed in Franciscan shale and vertically trained to increase exposure of the fruit to the sun. These methods, combined with thorough crop thinning, results in naturally low yields of concentrated grapes.

Jeffrey Patterson believes that winemaking begins in the vineyards. His calling has always been to produce the purest possible expressions of ecology and vintage, with minimal interference to the natural process.

The Winemaking Philosophy and Style of Mount Eden Vineyards

In order to produce the Mount Eden Estate Chardonnay, the grapes are pressed without crushing and then barrel-fermented in new and one-year-old Burgundy barrels of French oak, where the wine then also undergoes full malolactic fermentation, maturing on lees for 10 months before being lightly filtered and bottled. Each bottle is aged for 2 years in bottle before hitting the market. These wines are full-bodied with a core of lemon, rounded out by cardamom, hazelnut and a refreshing minerality. Mount Eden also produces a Estate Reserve Chardonnay made the same way, except in that following 10 months in barrel, the wine and lees are transferred together to stainless steel tanks, where the wine spends an additional 10 months on lees. This results in a full-bodied Chardonnay with earthy, mineral nuances. The Domaine Eden Chardonnay differs mostly in the origin of the grapes, which are selected from Mount Eden or Domaine Eden properties.

To produce the Mount Eden Estate Pinot Noir, the grapes are harvested early in the season from 7 hectares of estate vineyards, and fermented using natural yeasts in small open-top fermenters for a period of 10 to 14 days, with manual punch-downs. The wine is then transferred to 75% new and 25% 1-year Burgundy barrels, where it matures for 18 months before bottling, unfined and unfiltered. This produces an elegant Pinot Noir with an abundance of wild strawberry, blueberry, dill and undergrowth on the nose. The Domaine Eden Pinot Noir is a blend of selections from several different clones, grown at Domaine Eden. It is produced in much the same way as the Estate Pinot Noir, though the different terroir produces a very different wine, one with earthy red fruit aromas and a soft, rich texture. The Pinot Noir wines of Mount Eden are evocative of a Burgundy style, rather than of Californian version of this variety.

The Mount Eden Estate Cabernet Sauvignon has quite an interesting heritage. The Cabernet Sauvignon vines that can be found on the estate today were planted in the early 1980’s, using cuttings from the vines that Martin Ray had initially planted there in the 1940’s. Martin Ray had gotten the cuttings for these vines from the famous La Questa Vineyard, planted in the 1890’s by Emmett Rixford in Woodside, California. And to populate his vineyard, Rixford had used vine cuttings obtained directly from Chateau Margaux in Bordeaux. The vines used to produce the Estate Cabernet Sauvignon today, could thus be called distant cousins of those producing the world-renowned wines of Chateau Margaux. The grapes are fermented in 1,000-gallon stainless steel tanks with manual punch-downs and maceration taking place for 6 to 10 days after fermentation is finished. Next, the wine is transferred to Bordeaux-style new oak barrels, where it finishes malolactic fermentation. The wine matures in the cellar for 22 months, during which time it is racked 3 or 4 times. The wine is not filtered or fined before bottling. This Bordeaux-style blend of around 75% Cabernet Sauvignon, 22% Merlot and 3% Cabernet Franc offers beautifully integrated tannins and rich flavors of red currant, blackberry and fresh earth.

Ending with the 2000 vintage, Mount Eden also used to produce a single-variety Old Vine Reserve Cabernet from the 5 acres of Cabernet vines originally planted by Martin Ray in the 1950’s. The age of the vines and limited nature of the yield resulted in extremely concentrated aromas of red and black currant, violet, licorice and undergrowth. The Domaine Eden Cabernet blends Cabernet Sauvignon, Cabernet Franc and Merlot with smaller amounts of Petit Verdot and Malbec, sourced from Mount Eden, Domaine Eden and three carefully-selected sites in Saratoga and Los Gatos. This blend of 5 varieties and many terroirs results in a beautiful chorus of currant, sage, mint and oak flavors.