Dominus Estate is the New World expression of celebrated Bordeaux wine merchant and producer Christian Moeuix. Dominus Estate wines are the combination of centuries-old traditions from its French siblings Chateau Petrus, Lafleur-Petrus and Trotanoy and Napa Valley's innovative winemaking practices. Deeply rooted in the values of quality, stewardship, tradition and innovation, Dominus Estate produces distinctive wines that express the essence of its terroir. 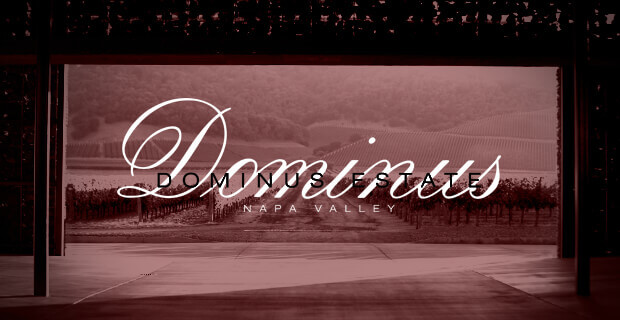 What do you get when you blend the traditional winemaking techniques of Old World Bordeaux with Napa’s unparalleled terroir? The wines of the Dominus Estate. Since his inaugural 1983 vintage, Christian Moueix (of Pomerol legend, Petrus) has produced, year after year, wines of great purity and balance, achieving his aim for the estate to become “the Haut-Brion of Napa.” Out in the historical Napanook Vineyard, Moueix’s combination of dry farming, cane pruning, crop thinning and planting of cover crops throughout the property yields a limited quantity of high-quality, concentrated fruit. The gentle, minimal intervention winemaking and limited-oak aging that follows results in wines of exceptional purity, brilliant reflections of the spirit of Napanook.

The History of the Dominus Estate: When Old World Meets New

The story of Dominus Estate can be traced back to the late 1960’s, when Christian Moueix – son of the famous Libournais wine merchant and winemaker Jean-Pierre Moueix – first discovered Napa Valley and fell in love with its wines. After finishing his studies at University of California at Davis in 1970, Moueix returned to Bordeaux to manage his family’s estates, including the legendary Petrus, along with Chateaux La Fleur-Petrus, Trotanoy and Madelaine. Yet, the young winemaker never quite forgot the Californian terroir that had so inspired him. In 1981, Moueix returned to Napa Valley and entered into a partnership to develop the historic Napanook vineyard, a 124-acre site already known for producing some of the highest quality wines west of Yountville. The first vintage of the estate was produced in 1983 as a collaboration between Moueix and the daughters of John Daniel (former owner of Inglenook) at the Rombauer winery.

By 1995, Moueix owned the estate in its entirety, naming it “Dominus” (Latin for “Lord”) in reference to his dedication to the terroir, which he considers the one true lord of the estate. To design their new winery in Yountville, Moueix and his wife Cherise chose Swiss architects Herzog and de Mueron, known for their cutting-edge, ultra-modern style and sustainable approach. Completed in 1997, the Dominus Estate Winery is anything but flashy. Instead, it blends into its natural environment to further emphasize the importance of the terroir above all else in the production of a quality wine. Instead of concrete walls, the winery features gabions filled with locally sourced basalt rocks, which filter in the natural light and provide insulation on very hot summer days.

The Napanook Terroir of Dominus Estate and How It’s Managed

The Napanook vineyard stretches over 103 acres of land, characterized by well-draining volcanic soils of gravel and clay loam, perfect for the cultivation of classic Bordeaux varieties, including Cabernet Sauvignon, Cabernet Franc and Petit Verdot. The vines of the Dominus Estate, some of which are over 100 years old, enjoy a temperate climate, with warm and dry summers moderated by cool breezes from the San Pablo Bay and cold, wet winters. At Dominus Estate, a deep root system is encouraged through dry farming, which forces the vines to dig deep into the soil for natural water sources and results in a better expression of terroir in the finished wines. According to Moueix, dry farming is also the solution to lowering the high alcohol levels typically observed in Napa Valley wines. This method allows the grapes to find their natural equilibrium and ripen enough to be picked much earlier than is typical in the region. Finally, dry farming is also a sustainable practice with environmental benefits, as it conserves water, a precious resource indeed in California.

Unlike many other Californian producers, the team at Dominus practices cane pruning during the winter season, cutting back the vines’ previous growth in order to better protect them from the elements and to ensure enough space between clusters for optimal fruit ripening. Cluster thinning reduces the yield of the vines, resulting in a higher concentration of color and flavor in the remaining fruit. Following the principles of sustainable vineyard management, the team at Dominus has also planted cover crops between the vines, which replenish the soil and prevent erosion. These crops provide habitat for insects that prey on vine pests, while the bird houses found throughout the property shelters owls and bluebirds, which also prey on harmful pests, especially rodents.


Around 2 weeks before the beginning of the harvest, the grapes are rinsed to remove dust. They are hand-picked with small French sheers, which minimizes the physical damage done to the vines. The fruit is transported to the winery in small harvest baskets, in order not to harm the clusters. Careful attention is paid to the timing of the harvest, with sunnier patches of land typically picked before areas with more shade. This ensures a consistent level of ripeness in the grapes.

The Dominus Estate produces two wines, in the style of a Bordeaux chateau: its eponymous First Wine and the more youthful, exuberant and approachable Napanook. Through both wines, Moueix aims to convey the genuine character of the fruit and the subtle intricacies of the Napanook terroir. Following the meticulous and very gentle manual harvest, the clusters are sorted by hand as well as by an optical berry sorting system. The latter uses image analysis to eliminate unwanted features, including stems and bruised fruit, working at a speed of 10 tons per hour.

Fermentations are carried out on a plot by plot basis, in order to achieve more complexity in the blended wine. During maceration, gentle pump-overs extract as much color, tannins and flavor compounds from the skin as possible. Then, the grapes are delicately pressed in a vertical wine press at a very low pressure, to gently release what is still left in the skins without bruising them too much. The wines are racked barrel to barrel in 100% French oak barrels to remove sediments during the maturation process. Finally, they are fined with egg whites (a traditional practice of Bordeaux) before bottling.

The estate’s Dominus cuvee is a blend of mostly Cabernet Sauvignon with Petit Verdot and Cabernet Franc, although the exact percentage varies by vintage. These wines age for 18 months in French oak barrels of which only around 40% is new, in order to ensure a pure expression of varietal characters, terroir and vintage. Dominus wines vary by vintage, though they tend to be full-bodied, energetic and vivacious with beautifully polished, fine tannins and a lively backbone framing blue and black fruit, among them blueberries, blackcurrant and blackberries. The fruit is complemented by herbaceous touches of lavender, aniseed and wild thyme, as well as earthy notes of forest floor. Built to age, these wines evolve exceptionally well in the bottle over a period of 25-30 years.

Napanook, whose first vintage was 1996, is a blend of Cabernet Sauvignon, Cabernet Franc and Petit Verdot (along with Merlot and Malbec, for some vintages). The fruit is selected from the Napanook vineyard for this wine tend to be livelier, fresher and more varietal-forward character. The wine is matured in oak of which only 20% is new, resulting in a more approachable, casual and fruity expression of the same wonderful terroir.