There are few chateaux that have marked the history of the Méec like that of Chateau Lynch-Bages. It is on the "Batges" lands near Pauillac where this great wine adventure began in the 17th...Read More 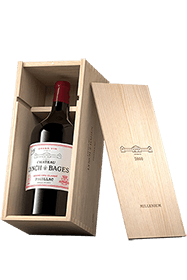 There are few chateaux that have marked the history of the Méec like that of Chateau Lynch-Bages. It is on the "Batges" lands near Pauillac where this great wine adventure began in the 17th century. The Chateau, then known as "Cru de Lynch", was owned by Thomas Lynch, son of John Lynch, a native of Galway (Ireland) and a Bordeaux trader. The reputation of Thomas Lynch's wines was such that the Chateau was ranked among the Fifth Classified Growths in the prestigious classification of 1855 in honour of the World Fair in Paris.

In 1939, the Cazes family bought the Chateau with its 100 hectares of vineyards that made up the estate. A renaissance then began at Chateau Lynch-Bages. Divided into two parts, the vineyards are spread over the Bages plateau and near Chateau Mouton-Rothschild on gravel-sand soil that offers excellent drainage. At Chateau Lynch-Bages, Cabernet Savignon makes up 73% of the vines, and they have found all the necessary conditions to reveal their splendor, which is typical of this area of the Bordeaux vineyards. Chateau Lynch-Bages does not neglect the other typical Bordeaux grape varieties. There are 15% Merlot, 10% Cabernet Franc, and 2% Petit Verdot.

The history of the great wines of Chateau Lynch-Bages starts with the type of care given to the vines. Since 2006, the estate has used satellite technology to divide up its parcels. The wines take the time to build up their personality that start with the variety and terroir, and then progress to maturity and end with the harvest. After maceration, running-off, pressing, and malolactic fermentation all come at a decisive moment during the wine making process, which requires all the expertise of the estate’s technical teams. Recognized as one of Bordeaux's most sought-after Classified Growths, Chateau Lynch-Bages offers the pleasure of powerful, opulent wines that have become more precise after each vintage. Elegant and structured, the wines are generous in their youth while becoming more aromatically complex as they age. 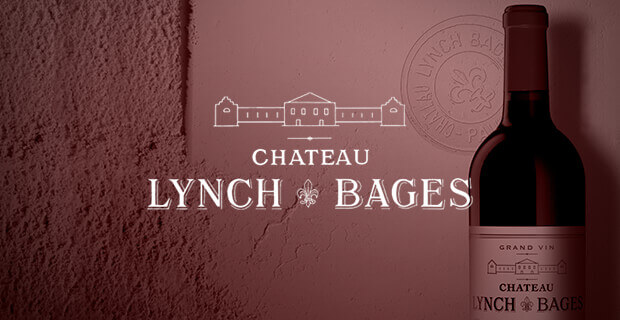 Settled in the heart of the star-studded Pauillac appellation, Chateau Lynch-Bages is the epitome of Bordeaux winemaking excellence. The estate vineyard spans 250 acres upon a remarkable terroir, where a moderate, maritime climate and quickly-draining gravel soils create ideal conditions for the cultivation of world-class Cabernet Sauvignon. While its history dates back almost three centuries, it was under ownership of the Cazes family that this Classified Fifth Growth has truly achieved the full height of its potential, as a place where traditional Medocain savoir-faire meets ever-evolving technology to produce wines of the utmost elegance and style.

The History of Chateau Lynch-Bages

Situated at the entrance of what is today known as the Pauillac appellation, the territory of “Batges” (a.k.a. Bages) boasts a winemaking history that dates back to the 18th century. Between 1749 and 1824, the vineyard (located in the village of Bages) was owned by Thomas Lynch, a Bordeaux merchant and son of an Irishman from Galway, who managed the vines with great care and produced wine under the label of “Cru de Lynch.” His wines gradually gained a strong following both in France and across the English Channel, and were eventually classified as one of the Bordeaux Fifth Growths in the Official 1855 Classification requested by Emperor Napoleon III for the Exposition Universelle de Paris.

In the years that followed its ownership by the Lynch family, Chateau Lynch-Bages changed hands several times. During the 1930’s, it was leased by General Felix de Vial, a descendant of the Cayrou family, to Jean-Charles Cazes, son of “Lou Janou” Cazes, who was a farmer in the upper valleys of Ariege. At this time, Jean-Charles Cazes had already had plenty of experience at Chateau Ormes de Pez in Saint-Estephe. He got to work replanting the vineyards of the estate, which had been largely neglected due to difficult times.

On the eve of World War II, Jean-Charles Cazes purchased both Chateau Ormes de Pez and Chateau Lynch-Bages and the two properties have remained in the Cazes family ever since. Jean-Charles’s hard work out in the vineyards was rewarded by a string of fantastic vintages following the 1945, which led to an enormous rise in the reputation of Chateau Lynch-Bages wine. After his death in 1972, Jean-Charles’s grandson Jean-Michel Cazes took over the management of the family business.

It was Jean-Michel Cazes who really brought Château Lynch-Bages into the modern age, installing a new vat room, investing in brand new, state-of-the-art equipment, constructing storage cellars and completely renovating the loading areas of the winery. He also travelled tirelessly, promoting the wines of his estate all over the world. On June 17th, 1985, a bottle of the 1975 vintage of Chateau Lynch-Bages became the first wine ever to have journeyed into outer space on the French-American mission of the STS-51-G Discovery shuttle. When asked, Cazes explained that the wine was chosen as a symbol to represent the glory of France. In 1987, Jean-Michel Cazes also joined the AXA insurance company to create AXA Millesimes, which has developed a dazzling portfolio of wine property holdings both in France and abroad. Jean-Michel continued to acquire properties in Bordeaux, including Villa Bel-Air in the Graves, L’Ostal Cazes in the Languedoc and Domaine des Senechaux in Chateauneuf-du-Pape.

In 1989, Chateau Lynch-Bages inaugurated its new winemaking facilities and one year later began producing the estate white wine, Blanc de Lynch Bages. Jean-Michel’s son, Jean-Charles Cazes took over the management of the company from his father in 2006. Under Cazes ownership, the chateau has never stopped innovating, completing in 2019 its most recent renovation project, which included gravity-flow wine cellar and a vat room housing over 80 stainless steel vats, designed with parcel-by-parcel vinification in mind. Nevertheless, the history and tradition of the estate is still omnipresent, particularly in the Chateau Lynch-Bages old vat house, which features traditional slatted floors and an extensive system of pulleys and buckets, the ancestors of today’s modern gravity-fed system.

The Lynch-Bages Terroir in the Heart of Pauillac

The Chateau Lynch-Bages vineyard expands over roughly 100 hectares (250 acres) on the banks of the Gironde estuary in the heart of the Pauillac appellation, located in the Medoc region of Bordeaux’s Left Bank. The vines are planted on a plateau of deep gravel beds over limestone subsoils, along with chalk and sandy soils, a terroir with excellent drainage toward the river nearby. This is an iconic Pauillac terroir with conditions ideal for the cultivation of Cabernet Sauvignon, the flagship grape variety of Left Bank Bordeaux. Cabernet Sauvignon makes up around 75% of the plantings at Chateau Lynch-Bages. The rest of the vineyard is planted to Merlot, Cabernet Franc and a small percentage of Petit Verdot.

The estate is also home to a much smaller plot dedicated to white varieties, planted to roughly 40% Sauvignon Blanc, 40% Semillon and 20% Muscadelle. The average age of the vines of Lynch-Bages is 30 years, though some are as old as 60. At Chateau Lynch-Bages, the team relies extensively on massal selection in order to propagate the vines in a way that preserves their genetic identity.

Today, a team of 35 people led by Technical Director Nicolas Labenne are closely involved in the monitoring of the estate vineyards. In the past two decades, remarkable advancements in satellite technology and meticulous studies of soil quality have really helped to map and restructure vine parcels in a way that allows for them to be fully expressed in the glass. Recently, the Lynch-Bages team has implemented a series of environmentally-conscious procedures, including the planting of cover crops, environmentally friendly soil maintenance and the use of sexual confusion capsules rather than harmful chemicals to control pests.

Harvest at Chateau Lynch-Bages is carried out depending on the specific needs of each grape variety and parcel. Alcoholic fermentation takes place in temperature-controlled stainless steel vats with extensive pumping over (remontage) in order to maximize the intensity of color, as well as the concentration of aromas in the wine. Finally, when fermentation is complete, the wines are drawn off using the phenolic potential of the vats. The wines then undergo maceration, drawing off, pressing and malolactic fermentation. In December, following several rigorous tasting sessions, the final blend is decided. This blend, which differs from one vintage to the next, is determined by a panel of experts chaired by Jean-Charles Cazes and the technical team.

The Chateau Lynch-Bages first wine is matured for 15 months in split stave-wood oak barrels, of which roughly two-thirds are new. The barrels are made by known and trusted cooperages, and are necessary to allow the wines of Chateau Lynch-Bages to rest and soften, while also imparting to the wine their own subtle aromas. The barrels are racked regularly and the wine fined before the bottling, which takes place at the chateau. The Chateau Lynch-Bages is as Pauillac in style as they come, revealing a deep garnet, purplish color in its youth, which fades to garnet-red with age. On the nose, this wine tends to be very expressive of black and red fruit aromas (notably black cherry and blackcurrants), as well as empyreumatic touches from oak-aging. On the palate, Chateau Lynch-Bages is quite broad, full-bodied and powerful, with a firm tannic structure that becomes silky with age. This is a Bordeaux Grand Cru Classe to bottle age for several decades.

In 2008, the Chateau Lynch-Bages Second Wine was renamed from Chateau Haut-Bages Averous (in production since 1976) to Echo de Lynch-Bages in order to draw a stronger link between this wine and the Grand Cru Classe property. This Bordeaux red wine is blended from roughly 75% Cabernet Sauvignon and 25% Merlot from a selection of the estate’s younger vines on certain plots. It is aged for a period of 12 months in French oak barrels used for one previous vintage. Receiving the same level of care and attention as its big brother, Echo de Lynch-Bages truly captures the essence of Pauillac and the signature style of Lynch-Bages in the glass, offering a fantastic introduction to the Lynch-Bages portfolio. In the glass, Echo de Lynch-Bages reveals delicious aromas of kirsch, redcurrant and blackcurrant, as well as a kind of earthy touch and dried herb fragrances. The palate is very elegant with a tight and precise tannic structure that will soften over time.

And finally, the rare AOP Bordeaux white wine Blanc de Lynch-Bages, produced since 1990, is a blend of Sauvignon Blanc, Semillon and Muscadelle grapes harvested from 6 hectares (15 acres) of vines in eight different parcels on the western edge of the estate. The Lynch-Bages white is fermented in oak and aged on lees for a period of 6 months with regular stirring. On the nose, this Bordeaux wine combines fine citrus and exotic fruit aromas with slightly spicy notes of vanilla. On the palate, the Semillon contributes a great amplitude and freshness, which persists upon a very long finish.