Fifth Growth Chateau Cantemerle provides amazing quality wines from the Haut-Medoc. Once a Middle Age English Fortification, winemaking on this property dates to the 16th Century. In fact,...Read More

When it comes to buying Place de Bordeaux fine wine futures, Millesima is considered one of the 5 top players, without a doubt. Millesima purchases 840,000 bottles per year on average directly from the producing estates, with whom Millesima maintains important relationships through 30 years of fine wine buying experience.

En Primeur (known in the English-speaking world as wine futures) is a campaign allowing fine wine customers to invest in the new Bordeaux vintage early, while the wines age in barrel before bottling.

Every year, the vast wine futures range offered by Millesima is carefully assembled with wines purchased directly from the top chateaux of Bordeaux. Our clients around the world always receive the wines a few months after they are bottled, usually 18-24 months after their purchase date.
Products (12)
RP92
JS95
WS90

Fifth Growth Chateau Cantemerle provides amazing quality wines from the Haut-Medoc. Once a Middle Age English Fortification, winemaking on this property dates to the 16th Century. In fact, written record shows us that the Lord of Cantemerle used a barrel of wine produced on the estate to pay his taxes in 1534. But it was not until the late 16th or early 17th Century that winemaking would become the estates chief economic activity. The management of the vineyard, sometimes entrusted to La Maison Cordier, allowed for the renovation of the vineyards. In the appellation of Haut-Medoc situated on fine and deep gravel, the vineyard covers an area of 90 hectares, planted to 60% Cabernet Sauvignon, 30% Merlot, 6% Cabernet Franc and the rest Petit Verdot. Chateau Cantemerle wines are of brilliant color with a powerful bouquet, lively flavor and remarkably fresh tannins, these wines are a delight for any wine enthusiast. Approachable at a young age these wines are nonetheless capable of aging gracefully.

With an illustrious history that dates back to the Middle Ages, when the estate served as fortification to defend the banks of the Garonne, Chateau Cantemerle is one of the oldest estates of the Medoc. The first record of winemaking here comes from 1354, when the Ponset de Cantemerle paid his feudal tithes in wine produced on the property. Fast-forward to 1855, when the estate was Classified a Fifth Growth of Haut-Medoc in recognition of the exceptional quality of its wines. 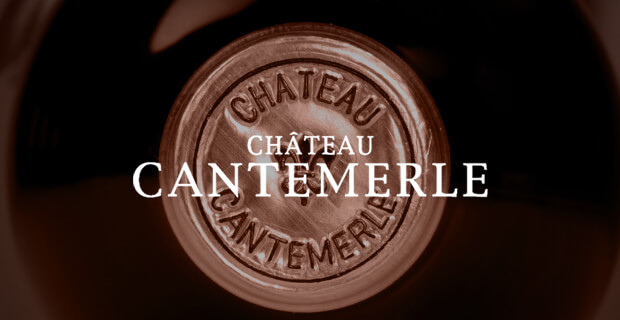 Today, the vineyard of Chateau Cantemerle extends over 91 hectares, planted with the flagship grapes of the Bordeaux’s Left Bank. The estates wines – its namesake First Wine and its Second Wine, Les Allees de Cantemerle – are excellent representatives of the Haut-Medoc style, revealing great harmony and elegance through rich aromas and tannins full of finesse.

The History of Château Cantemerle

Situated today in Bordeaux’s Haut-Medoc appellation, Château Cantemerle boasts a long and illustrious history that dates back to the Middle Ages. Back in those days, the château was part of a line of fortifications built to defend the banks of the Garonne River. In the 13th century, while Aquitaine was under English rule, the Lord of Cantemerle fought with Henry III of England in Europe against the King of France and in 1242 he lost at the Battle of Taillebourg.

Nevertheless, the Lord’s domain remained under his rule and one of his descendants, the Ponset de Cantemerle of France, would become Lord of the seigneury in 1340. The Ponset de Cantemerle was recorded as having paid his tithes on wine with a tun of clairet (the pale red wine at the time), with mention of viticulture on his estate dating back to 1354. During the 15th century, this feudal estate belonged to the Caupene family, eventually passing to the de la Roque family through marriage.

On August 20, 1579 the chateau was acquired by Jean de Villeneuve, the second president of the Bordeaux parliament, who married Antoinette de Durfort to form the Villeneuve Durfort family. During this time, the estate became a “Bourdieu,” or a farm with wine production as its principal activity. On September 16, 1855 the Bordeaux Chamber of Commerce classified Chateau Cantemerle as a Classified Fifth Growth (3eme Grand Cru Classe) of the Medoc in the Gironde department, near Margaux. Despite the absence of the estate from the original list of classified chateaux due to a mistake by brokers, Caroline de Villeneuve Durfort lobbied ceaselessly to be included and was eventually successful.

During the decades that followed, the Cantemerle estate would expand its vineyard and continuously improve the quality of its wines. The vineyards would fall on challenging times, however, at the end of the century, with the arrival of the phylloxera epidemic and the following onset of mildew, both of which devastated the vineyards. In 1891, Jeanne Armande de Villeneuve Durfort Baronne d’Abbaye died, leaving the estate to be sold at auction by her heirs. This ended the almost three century long tenure of the family at the helm of Chateau Cantemerle.

In 1892, Theophile-Jean-Dubos, president of the Dubos-Freres negociant firm, took over the estate and passed it on to his sons Pierre and Bernard Dubos in 1905. Pierre Dubos eventually became the sole owner and invested significantly into the estate, elevating the reputation of its wines. The estate passed by inheritance to Henri Binaud of the Beyerman negociant firm and then Bertrand Clauzel until it was sold to the SMA Group in 1981.

This purchase was actually the very first acquisition of a Bordeaux vineyard by an insurance group. By this time, only 20 of the estate’s total 70 hectares of vineyard land were planted, but the wines showed tremendous potential. The group carried out an extensive renovation of the winemaking facilities and replanted the vineyards, increasing the hectarage under vine to 67 hectares by the 1990’s. A modern vat room with stainless steel vats was installed and the barrel cellar rebuilt. Nevertheless, six small 100 hL oak vats were reassembled with the best staves of the original tanks of the estate, as a link to the chateau’s history. The vineyard went through a head grafting operation in 1997, which reduced the proportion of Cabernet Franc from 20% to 6%. The rest was planted with better-performing Cabernet Sauvignon and Petit Verdot vines.

The beginning of the century saw a new chapter at Chateau Cantemerle in Bordeaux’s Haut-Medoc, where the focus turned on adopting “green techniques” out in the vineyards. The development of precision viticulture has allowed for more control over the style of the estate’s wines, which have continued to improve in quality over the years. Most recently the iconic Managing Director Philippe Dambrine has passed the torch to Laure Canu, who now runs the estate.

The Chateau Cantemerle vineyard extends over 91 hectares of deep gravel in the communes of Macau and Ludon, within the appellation of Haut-Medoc in Bordeaux’s Left Bank. The vines stretch their roots deep into a mixture of gravel and silica, poor soils which force the vines to struggle for nutrients and results in grapes with a high concentration of aromatics and flavor. These soils also reflect the rays of the sun and retaining the heat soaked up during the day at night, helping the grapes ripen.

Cabernet Franc and Petit Verdot grape varieties. The vines are aged 35 years on average and are planted at a high density of 8,300 vines per hectare, which reduces yield and allows the grapes to ripen under the best conditions. The vines are pruned by hand in the Medoc Double Guyot method each winter. The vineyard team conducts a green harvest after veraison in July to encourage the maturity of the fruit. In August and September, they also remove foliage from the lower part of each vine, a process known as deleafing, allowing for better ventilation and more sun exposure for the grapes.

During the harvest of the fruit, a careful selection process takes place in the vineyard on four tables. During this time, a very selective sorting removes damaged fruit, leaves and other MOG (material other than grapes).

Winemaking in a Modern Winery Housed in a Neoclassic Building

After picking and sorting, the grapes are desetemmed, then hand-sorted once again. The fermentation and maceration takes 28 to 30 days, during which time the tannins are gently extracted into the juice. After the wine is run off, the top and bottom of the cap is removed and only the middle, containing the finest phenolic content, is pressed.

To make the Chateau Cantemerle First Wine, the unblended wines are aged for 12 months in 225L barrels made of 200-year-old oak trees with soft to medium toast. Around 35% of these barrels are new each year. After the first 12 months, the wines are blended and then clarified and aged for an additional 4 months in vats. To make the Second Wine, Les Allees de Cantemerle, 50% is aged for 16 months in vats and the rest in 3-year-old barrels.

The Unique Signature Style of a Haut-Medoc Fifth Growth

Th Chateau Cantemerle Haut Medoc First Wine is a pure expression of the estate’s precious terroir, its unique soil and microclimate. This wine shows off a bright color in the glass. After some decanting, a younger vintage will reveal a rich bouquet of fresh cherries, olives and tobacco as well as well-integrated touches of oak, which fade over time. The palate offers silky, smooth tannins and a symphony of flavors, which include fruity, spicy and peppery nuances. This wine achieves great balance of elegance, freshness and power on a finish that lingers long.

We recommend enjoying the Chateau Cantemerle with roasted poultry dishes, especially served with wild mushrooms. It will also go nicely with roasted river fish, like pikeperch or trout. While wine lovers who enjoy grippy tannins will find this wine approachable in its youth, it also has the potential for decades of further aging.

Meanwhile, the estates Second Wine, Les Allees de Cantemerle, is meant to be enjoyed in its youth. The palate reveals airy tannins and a soft, medium-bodied texture, with rich flavors layered on a nice structure. Pair this particularly food-friendly second wine with your favorite cheeses, like Saint Nectaire, Cantal or Manchego. This Bordeaux Haut Medoc red will also go surprisingly well with several desserts, especially a chocolate parfait or a tart with hazelnut cream.

If you have any questions about Chateau Cantermerle in Haut Medoc, Bordeaux, or if you would like to inquire about the lowest price (tax, duty or bond) on a case or bottle of Chateau Cantemerle, do not hesitate to contact us directly. Reach out to our team to arrange a delivery of a standard format bottle or large format, like a Magnum of Chateau Cantemerle. Our wine specialists would also be happy to share with you the ratings of these wines by top wine critics like Jancis Robinson and Robert Parker.