A prestigious Classified Growth of Saint-Julien, Chateau Talbot is one of the essential references of the wines of the Left Bank in the Bordeaux region. The estate oversees a unique vineyard,...Read More

Millesima boasts over 30 years of experience in the fine wine industry as one of the greatest buyers of wine futures on the Place de Bordeaux. The average yearly purchase is 840,000 bottles.

The Bordeaux Wine Futures campaign, also known as the En Primeur, offers customers a way to invest in the new vintage from Bordeaux chateaux during a period when these wines are still in barrel. Bordeaux Futures allows clients to purchase these new vintage wines before they are put in bottle.

At Millesima, we try to offer the most complete selection of Bordeaux futures, which we purchase directly at the producing chateaux. These wines of the new vintage are delivered to our clients once they are in bottle, which is 18-24 months after the date of purchase.
Products (20)
RP93
JS95
WS95

A prestigious Classified Growth of Saint-Julien, Chateau Talbot is one of the essential references of the wines of the Left Bank in the Bordeaux region. The estate oversees a unique vineyard, consisting of a 110-hectare single vineyard. Chateau Talbot enjoys an exceptional terroir due its Garonne gravel-alluvial soils and its close proximity to the Gironde estuary.

Benefiting from the expertise of Nancy Bignon-Cordier, oenologist Eric Boissenot and consultant Stephane Derenoncourt, the wines of Chateau Talbot are among the most famous Medoc vintages that are recognized for their consistent quality vintage after vintage.

As classy, elegant wines, the style of Chateau Talbot has a generous bouquet that is expressive in its youth and then reveals great depth and complexity over the years. On the palate, these wines decisively display the typicity of the Saint-Julien appellation that is marked with structured, silky tannins. Chateau Talbot embodies the excellence of Medoc wines in a classic approach, and is far from the clichés of austerity.

Nestled in a magnificent forest of concrete “trees”, the 1,800 oak barrels of Chateau Talbot age wines with centuries of history and know-how behind them, wines that have earned a reputation as some of the most reliable and carefully-made among the Grands Crus of Saint-Julien. Over the course of the past 100 years spent at the helm of this Classified Fourth Growth, the Bignon-Cordier family has spared no effort or expense in elevating the chateau to the height of its potential, bringing on board some of Bordeaux’s greatest minds to help create the chateau’s signature blend. 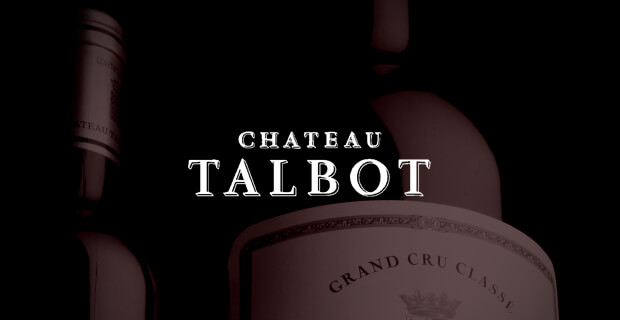 Fruit from well-drained hilltops of Gunzian gravel are transformed through precise, plot-by-plot vinifications into a range of three wonderful wines, an eponymous “Grand Vin,” a fruit-forward second and one of the oldest dry white wines of the Medoc. Remarkably consistent from one vintage to the next, Chateau Talbot displays a rich bouquet of black fruits, cedarwood, tobacco and licorice, upon a palate that is already quite silky in its youth. The wine also ages beautifully in bottle, developing even more complexity and finesse over time.

The History of Chateau Talbot

One of the oldest estates of the Medoc region, Chateau Talbot gets its particularly non-French-sounding name from an English military commander and governor of Guyenne by the name of Sir John Talbot, who was defeated in 1453 at the battle of Castillon, resulting in the end of English control of the Aquitaine region. After it was taken back by the French, ownership of the property passed from one family to the next, including several years under the Marquis of Aux. The chateau earned the title of Fourth Classified Growth in the Official Classification of 1855.

In 1918, Chateau Talbot began a new chapter of its history when it was acquired by Désiré Cordier. By this point the Cordier family had already established itself as one of the most respected in the world of Bordeaux wine, having owned and managed several other reputed chateaux. Désiré was succeeded by his son Georges Cordier, followed by his grandson Jean Cordier, at the helm of the property, and the latter two invested heavenly in recovering this Fourth Growth to its former glory. As the selection process for the chateau’s namesake First Wine grew stricter over time, a Second Wine named Connetable Talbot was released in the 1960’s. Georges Cordier also pursued his love for white wine by planting 5 hectares of Sauvignon Blanc and Semillon vines to produce a white wine named Le Caillou Blanc de Chateau Talbot, which premiered with the 1945 vintage. This decision was quite rare among producers of Saint-Julien at the time and La Caillou Blanc remains one of the oldest dry white wines of the Medoc.

Following the death of Jean Cordier, the estate passed to his daughters Nancy and Lorraine, who continued to run it with the know-how that had been handed down to them through the generations. In 2007, the estate hired Stephane Derenoncourt as consultant winemaker who with the help of oenologist Eric Boissenot, set about to further improve the quality of the wine. The estate also went through a complete renovation of its cellars, vat rooms, winemaking facilities and barrel room, which finished in 2016. Today, Nancy Bignon Cordier and her husband Jean-Paul Bignon run Chateau Talbot, with the help of their children Philippine, Marguerite and Gustave Bignon.

In 2018, the Bignon-Cordier family celebrated 100 years at the helm of this Saint Julien Classified Fourth Growth. For this occasion, the 2018 vintage was released in a very special bottle with a screen print illustrating the unique concrete “trees” found in the estate’s iconic barrel cellar.

A Privileged Terroir in Saint-Julien

Chateau Talbot is situated in the Saint-Julien appellation of the Medoc region, on the Left Bank of Bordeaux. The estate is home to a vineyard spanning 272 acres (110 hectares), of which 260 acres are dedicated to red vines. Of these, roughly 66% is planted with Cabernet Sauvignon (the flagship grape of the Medoc, which gives the wines their power and structure), 30% with Merlot (which lends the wines a roundness and smoothness) and 4% with Petit Verdot (which adds a delicate signature touch). The remaining 12 acres are planted with white varietals, specifically 80% Sauvignon Blanc and 20% Semillon.

The vines of Talbot are planted in soils of Gunzian gravel upon subsoils of fossil-rich limestone on well-drained hilltops which rise to around 23 meters above sea level. These are some of the highest vineyards of the Saint-Julien appellation. The vines are planted at a density of around 7,700 vines per hectare and are aged around 35 years on average. The vines are trained in Guyot, as is traditional in Bordeaux, and harvested by hand with a yield of around 45 hL/ha.

A Winemaking that Blends Tradition with Technological Innovation

Following a manual harvest, the fruit arrives to the Talbot winery, where it passes over a sorting table. The fruit is then vinified in a combination of temperature-controlled stainless steel and tronconic wooden vats, the choice between them depending on the specific character of each plot.

The aging of the wines takes place in the estate’s unique new barrel cellar, designed by visionary Bordeaux architects Nairac and Vacheyrout and finished in 2012. Covering 1,500 square meters, the space resembles a magnificent forest of concrete “trees,” linking the floor to the ceiling, which is seven meters high. Each of these “trees” has a base opening into four pillars and, when viewed from above, can also resemble grapevines pruned in the traditional gobelet style. The Talbot barrel room houses 1,800 oak barrels, used to age the wines of the estate for an average of 18 months. The cooper of origin, newness of the barrel, exact length of aging and the frequency of racking is adjusted to the personality and needs of each specific plot and to the vintage overall. The wines are tasted frequently during the aging process.

The blending process is fundamental at this Saint-Julien estate, and it is carried out by the entire team, with the help of consultant Stephane Derenoncourt and oenologist Eric Boissenot along with Nancy and Jean-Paul Bignon. The wines are bottled with a QR code gracing the capsule, which allows for authentication of each bottle and helps prevent counterfeiting.

The Signature Style of the Chateau’s Wines

Château Talbot blends roughly 60% Cabernet Sauvignon, 26% Merlot and 5% Petit Vedot, though the exact proportion of the blend depends largely on vintage. The wine is aged for 15 to 18 months in oak barrels of which 50-60% is new. This Fourth Classified Growth stands as an embodiment of classic Saint-Julien, offering a generous bouquet of cassis and other black fruit, rounded out by complex nuances of tobacco, cedarwood and licorice. The palate is round and quite pleasant already in its youth, offering silky tannins and an expansive character that bodes well for aging. Pair this wine with game meat, like roasted venison, or boldly flavored cheeses.

Connetable de Talbot blends around 50% Cabernet Sauvignon and 50% Merlot and is made with fruit from the estate’s younger vines. This red wine is aged for 12-16 months in oak barrels, of which only around 15% is new each year. Since its launch in the 1960’s, this wine has enjoyed a great reputation, remaining one of the most consistently highly-rated Second Wines of the Medoc. Just like its older brother, Connetable is a very elegant and clean Saint-Julien, revealing a juicy, fruit-forward palate, supple tannins and a savory touch on its long and fresh finish.

Caillou Blanc is Talbot’s dry white wine, made from a blend of mostly Sauvignon Blanc with some Semillon, and produced in a Burgundy style: with lees-aging and battonage. This is a wine with plenty of aromatic character and a lively personality, revealing bright aromas of stone fruits.