Located in the heart of Pomerol, Chateau Clinet and its famous gravel plots are home to one of the greatest terroirs for Merlots, and as such, is greatly praised. This non-typical wine possesses fine...Read More

Located in the heart of Pomerol, Chateau Clinet and its famous gravel plots are home to one of the greatest terroirs for Merlots, and as such, is greatly praised. This non-typical wine possesses fine and complex aromas of red fruits, blackberries and truffles that are both elegant and intense, combining an elegance and intensity that are recognized today as one of the most prestigious wines in the world.

Looking for the new vintage from Chateau Clinet? Browse our extensive selection of wine futures and learn the benefits of investing in them today!

Easily recognizable for its striking red shutters contrasting against a creamy-white limestone façade, Chateau Clinet today represents one of the best bets of Bordeaux’s Right Bank. The estate’s 27-acre vineyard is situated at some of the highest points of the Pomerol plateau, where flagship Merlot thrives in pockets of deep clay, while Cabernet Sauvignon occupies a gravellier terroir. 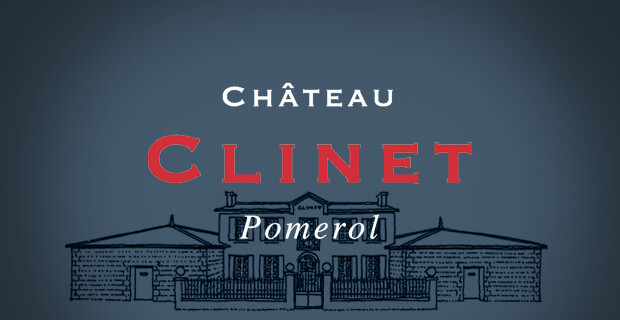 The devoted steward at the helm of this modest yet self-assured chateau is UGCB President and Marathon runner Ronan Laborde who has, since the start of his tenure in 2004, completely revamped the Clinet brand. Having expanded and replanted a portion of the vineyard according to extensive soils studies, Laborde has also introduced sustainable viticultural practices, like plowing by horse, and rethought planting density and yield to better suit his vines. In the brand new underground cellar, Laborde has vastly reduced the use of new oak, which now represents only 60% of Clinet’s aging program. Despite an impressive rise in quality through the vintages, Laborde has remained steadfast in the pricing of his First Wine, which remains one of the most approachable gems of its appellation. Chateau Clinet is a complex and sensual beauty of a Pomerol, with floral, chocolaty and smoky nuances complementing its red and black berry fruit core.

The History of Chateau Clinet

Situated at one of the highest points of the Pomerol plateau, Château Clinet is home to one of the oldest vineyards of its appellation, believed to have first been planted in 1595. Some old maps also show vines planted here in 1785. The estate was purchased in the 1860’s by the Constant family and then later sold to the Arnaud family of Bordeaux winemakers, who also owned Petrus. By the time the estate was acquired by the Audy family of negociants in the second half of the 20th century, Jean Michel Arcaute had been Managing Director of the estate for roughly 20 years.

Jean Michel Arcaute married Clinet owner George Audy’s daughter and took over the estate, implementing several changes that effectively brought the estate into the modern age. Arcaute adopted green harvesting in the vineyard and reduced the amount of Cabernet Sauvignon planted. He also hired legendary consultant oenologist Michel Rolland, who recommended later harvesting to ensure very ripe fruit and extended the maturation time in 100% new French oak barrels. With Rolland’s help, Arcaute restored the wines of the estate to their former glory, as evidenced by the 100-point rating received by Robert Parker for the 1989 vintage.

In 1999, the chateau was acquired by Jean-Louis Laborde, whose son, the competitive marathon runner and passionate wine lover Ronan Laborde began managing the estate in 2004. Laborde replanted around 20% of the vineyards and expanded them with purchases across the appellation in 2010 and 2012. He increased to overall density of the plantings and increased yield to 40 hectoliters per hectare. He also constructed a new winery, reduced the amount of new oak barrels used in the maturation of the wines to around 60% and introduced eco-friendly and sustainable viticultural practices. With Michel Rolland still on the advisory board but no longer a full-time consultant, Laborde prefers to use his own winemaking team for all decisions.

Vineyards Perched on the Pomerol Plateau

Chateau Clinet is today home to a vineyard spanning over 11 hectares (27 acres) across the Pomerol appellation on the Right Bank of the Gironde in the Bordeaux wine region. The vineyards are divided into roughly 21 different parcels and are situated at the highest point of the Pomerol plateau, whose famous terroir is characterized by a blend of gravel and clay soils with plenty of iron and very good sun exposure. Most of Clinet’s wines are planted in three main parcels : La Grande Vigne (old vines in deep clay with some gravel over the top), Les Argilles (deep clay) and Le Plateau (gravel with smaller stones).

The vineyard is planted with around 88% Merlot and around 12% Cabernet Sauvignon with a small portion of Cabernet Franc. The vines are aged 42 years on average, though the estate also boasts some of the oldest vines of the Pomerol appellation in their La Grande Vigne parcel. The vineyards are cultivated using sustainable practices and grass cover is allowed to grow naturally between the vine rows. Roughly 80% of the vineyard is plowed by three horses, named Olympe, Perec and Vainqueur.

Winemaking and Aging at this Pomerol Estate

At Chateau Clinet, the fruit is harvested strictly by hand each year. Upon arrival to the winery, they undergo a secondary selection process and are then transferred to 17 thermoregulated and double-walled stainless steel tanks, where they undergo fermentation with manual punch-downs. The extraction process is very gentle, allowing for a layered effect on the palate while also retaining the soft texture of the fruit. The vats range in size from 25 hectoliters to 45 hectoliters, to allow for plot-by-plot vinifications. Following alcoholic fermentation, the wines undergo malolactic fermentation in a combination of vats and French oak barrels.

Chateau Clinet matures for a period of 18 to 22 months, depending on the vintage, in 225 hectoliter French oak barrels, of which around 60% are new and the rest are of second use. The press wine is generally aged separately and added to the final blend in vintages where the wine needs more structure. The property also produces a second wine named Fleur de Clinet, which is matured for only 12 months in second-fill French oak barrels.

A Signature Style and How Best to Enjoy It

Blending around 85% Merlot with around 15% Cabernet Sauvignon, with the exact proportions depending on the personality of each vintage, the eponymous Grand Vin of the wine producer Chateau Clinet reveals a dark ruby color in the glass. This Pomerol sports a very complex and expressive bouquet, full of red and black berry fruit, complemented by floral fragrances, along with smoky, chocolatey and peppery touches. On the palate, this Right Bank Bordeaux expresses ripe fruit and a great balance between smooth yet dense tannins and bright acidity. The finish lingers forever, offering tons of forest fruit flavors on a spicy, creamy palate. The freshness and minerality of this wine make it very alluring in its youth, although it has the potential to age for decades in the bottle.

Depending on the vintage, we recommend aging a bottle of the chateau’s First Wine for 8-35 years before opening. Younger vintages will benefit from decanting for 2-3 hours before tasting. To fully express its aromas, this wine should be served at around 60 degrees Fahrenheit. It will pair beautifully with a filet mignon of pork served with wild mushrooms, roasted guinea fowl with chestnuts or stuffed peppers.