The Ridge Vineyards adventure began in 1885. At the time, Dr. Osea Perrone acquired land near Monte Bello Ridge in California's Dry Creek Valley region in the western part of the United States. He planted vines on these limestone soils and produced his first vintage in 1892.

After being taken over by William Short in the 1940s, the estate was acquired by four engineers from the Stanford Research Institute in 1959. Wishing to make this estate a reference among the finest Californian wines, the four owners renamed the estate "Ridge Vineyards" in 1962, increased the size of the vineyard and entrusted the technical management to the famous Californian winemaker, Paul Draper.

Cabernet Sauvignon and Zinfandel make up most of the vineyard, completed by Syrah, Grenache, Carignan and Petite Syrah. Renowned for its red wines, Ridge Vineyards has also produced an exceptional Chardonnay wine since 1962. 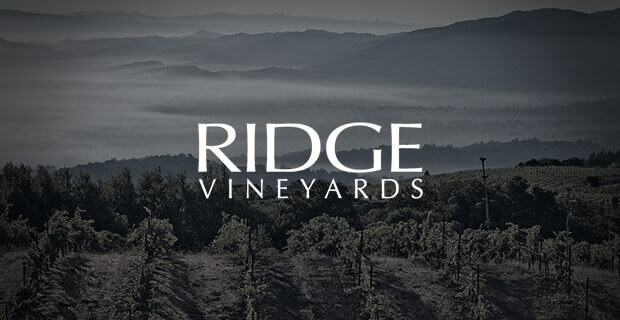 While Ridge Vineyards is historically best known for its sweeping success at the Judgement of Paris in 1976, a peek into its past and present reveals a renown hard-earned, the realization of an American dream. Established by four young Stanford engineers in 1959 and brought to the pinnacle of its excellence by winemaker Paul Draper, Ridge Vineyards has for over 50 years consistently produced what is hands-down one of the greatest Cabernet Sauvignons in California: their world-famous flagship Monte Bello. They have also arguably done more than any other winery in the area to elevate the status of Zinfandel from an inexpensive table wine to a beautifully balanced, age-worthy and complex collector’s cuvée. Through sustainable and organic practices out in the vineyard coupled with their signature “pre-industrial” approach to winemaking, Ridge Vineyards produces a portfolio of beautiful wines, single-vineyard expressions of California’s remarkable terroir.

Ridge Vineyards: A Rise to Success

In 1885, an Italian doctor by the name of Osea Perrone purchased 180 acres of land near the top of California’s Monte Bello Ridge. After terracing the slopes of this mountain and planting vines there, with cuttings from the legendary La Questa vineyard in the Santa Cruz Mountains, he built the Monte Bello Winery using local limestone. He began producing wines with 1892 as his debut vintage. This three-level winery, built straight into the side of the mountain well over a century ago, serves today as the production site for the wines of Ridge Vineyards. In the 1940’s, a theologian by the name of William Short discovered the abandoned winery. He purchased it, along with the vineyard just below it, replanting many of the parcels to Cabernet Sauvignon.

In 1959, four Stanford Research Institute engineers purchased the winery from Short. Together, Dave Bennion, Hew Crane, Charlie Rosen and Howard Ziedler produced a quarter-barrel of California Cabernet Sauvignon from the ten year old vines on the property. This wine showed signs of remarkable quality and, when that quality was still there in the next two vintages, the partners decided to re-bond the winery and make Ridge Vineyards their full-time project. Gradually, they purchased all of the historical Monte Bello vineyard, expanding it from 15 to 45 acres. Their first Zinfandel was produced in 1964 from an old parcel lower down on the ridge, and their second in 1966 from the Geyserville plot. The production of Ridge Vineyards increased steadily to almost 3,000 cases per year in 1968.

In 1969, the partners hired Paul Draper as winemaker. Draper first developed his knowledge for fine food and wine while serving in Army intelligence in Italy, after graduating from Stanford University with a degree in philosophy. Following his discharge, Draper moved to Chile where he help set up a model winery, producing an excellent Cabernet. When he moved back to California, he showed this wine to the Ridge Vineyards team, who were impressed by its quality and invited him to join them. A practical winemaker, Draper pioneered a “hands-off” style in the winery, allowing the fruit to transform into wine with minimal human involvement. It was Draper who took the lead in restoring the ancient Perrone vineyard near the winery and purchasing or leasing other carefully-chosen parcels in the area. It was also Draper who brought the quality of the wines to a new plateau, earning them an international reputation.

Perhaps the brightest moment in the estate’s success story was the Judgement of Paris of 1976, when Californian Chardonnays and Cabernets defeated some of the best wines of France at an organized tasting. During this event, the Monte Bello 1971 by Ridge Vineyards came in 5th, putting the estate and the California wine region - for the first time - on the map.

A Precious Collection of Vineyards at the Ridge Vineyards Estate

Ever since the 1960’s Ridge Vineyards has specialized in the production of Cabernet Sauvignon, Zinfandel and Bordeaux Blends, bottled as single-vineyard wines. The estate began its conversion to organic farming in 2008. As of summer 2017, 315 acres of estate vines are certified organic, making Ridge the largest grower of organically certified grapes in both Sonoma County and Santa Cruz Mountains appellations of California. The vineyard teams sow cover crops and use integrated pest management rather than chemical pesticides. Sustainability and environmentally responsible practices are at the heart of the vineyard work, perfectly in line with their non-invasive style of winemaking.

Today the estate is home to a beautiful collection of 16 thoughtfully chosen vineyards, each with its own unique personality. Perhaps the most famous of these is their historical Monte Bello vineyard, one of the first to be planted and the cradle of the Ridge Vineyards Monte Bello wine, whose first vintage was back in 1962. Situated at a lofty elevation on the Santa Cruz Mountains, this vineyard is characterized by its signature decomposing limestone and Franciscan rock soils. Just 15 miles from the Pacific Ocean, Monte Bello is part of the Santa Cruz Mountains AVA, which is one of the coolest California Cabernet producing regions. The vines produce a very low yield (less than 2 tons per acre) of fruit extremely concentrated in flavor. The resulting wine is the iconic Ridge Vineyards Monte Bello cuvée, an incredibly age-worthy and elegant Bordeaux blend often referred to as “America’s First Growth.” Unlike the high-alcohol, overripe and often flabby nature of some Californian Cabernet, the cool climate of the Monte Bello vineyard contributes a subtle green, herbal hint to this wine, which really sets it apart from the rest.

In 1972, Draper came upon 80 year old vines in the Lytton Springs vineyard in what is today the Dry Creek Valley AVA, and decided to purchase grapes to produce his first Lytton Springs bottlings in that same year. Over the next few vintages, Draper realized the enormous potential of this vineyard, whose gravelly clay soils and combination of foggy, cool morning and sunny, warm afternoons created the ideal environment for Zinfandel. In 1991, on the 20th anniversary of the first Ridge Vineyards Lytton Springs bottling, the estate purchased the vineyard. Today this Sonoma County winery is home to some century-old heritage Zinfandel wines, as well as Petite Sirah, Carignan, Mourvedre and Grenache.

Ridge also produces an excellent Zinfandel-dominant field blend from the Geyserville vineyard, whose gravelly loam soils mixed with large river rocks offer excellent drainage, retain heat for when the vine needs it most and impart a distinctive mineral quality to the wines. This vineyard is home to the “Old Patch,” a plot of the oldest vines farmed by the Ridge team, some over 130 years old. Fruit from these naturally low-yielding vines contribute an incredible complexity to the blend.

Considering the beautiful and distinctive vineyards in the Ridge Vineyards portfolio, it is no wonder that the estate has chosen a minimum involvement winemaking style in order to allow these terroirs to best express themselves in the glass. In fact, the winery team calls its approach “pre-industrial,” meaning that they have completely eliminated the use of modern additives and industrial processing, which they see as limiting rather than enhancing quality. Instead, they have gone back to what California wine was in the 19th century, before Prohibition put an end to this style.

Fermentations at Ridge Vineyards are carried out with natural yeasts only, instead of cultured yeast strains. No commercial enzymes or nutrients are used during fermentation. Instead, the vines are cultivated in a way that ensures enough nutrients in the harvested fruit to “feed” the yeasts during fermentation. Since the wines of Ridge Vineyards are meant to be food-friendly wines, meant to be enjoyed as part of a meal, the alcohol content is purposefully kept low, around 13 percent for the Cabernet rather than the big bold 15 percent California Cabernet that is now more common.

In order to allow the terroir of the vineyard itself to create the wine, the steps taken at the winery are adapted to each vineyard. For example, the Monte Bello cuvéee is produced by keeping all parcels and varieties separate and vinifying them in small fermenters. They mature in air-dried American oak barrels, instead of the French barrels that are now widespread in California wine producing areas. The outcome is a wine of great structure, complexity and balance, which can age for several decades with ease. Meanwhile, their Geyserville cuvée is a field blend of Zinfandel, Carignan, Petite Sirah and Mourvedre, harvested and vinified together to produce an extremely age-worthy wine with intense black fruit flavors and hints of cedar.

The wines of Ridge Vineyards stand as a testament to the magnificent terroirs of California, terroirs which are cared for with respect and allowed to “create” the estate’s wines with minimal human intervention.