Despite never having been officially classified, Petrus (commonly called Chateau Petrus) is one of the single best known estates in the Bordeaux wine region. Petrus Pomerol crafts some of the rarest...Read More

Despite never having been officially classified, Petrus (commonly called Chateau Petrus) is one of the single best known estates in the Bordeaux wine region. Petrus Pomerol crafts some of the rarest and most sought after wines in the world, whose most avid fans have included Queen Elizabeth II (who served it at her engagement party) and President Kennedy.

The 28 acre estate is located on the highest part of the prestigious Pomerol appellation on Bordeaux’s Right Bank. The vines of Chateau Petrus Pomerol are planted in soil rich with black clay, ideal for growing Merlot. This varietal, in fact, accounts for nearly 96% of the vines and is used to produce a grand vin made exclusively of Merlot, a rarity among the properties of Bordeaux.

Petrus Pomerol wines are velvety, intensely concentrated and rich with complex aromas of truffles, chocolate, and luscious red fruit. Truly powerful, a bottle of Petrus wine from the best vintages can age for more than fifty years. An ultimate treasure for any wine collector or wine lover.

Looking for Petrus wine futures from the newest vintage? Learn more about wine futures and why to invest in them through our guide!

Petrus | The Undisputed King of Pomerol

Petrus. Perhaps no other single word in the world of wine conjures up so much allure, mystique, reverence and luxury. A pure Merlot hailing from a “button” of blue clay on the eastern edge of the Pomerol appellation, this unclassified gem consistently fetches higher prices on the market than Bordeaux’s First Growths from across the river. 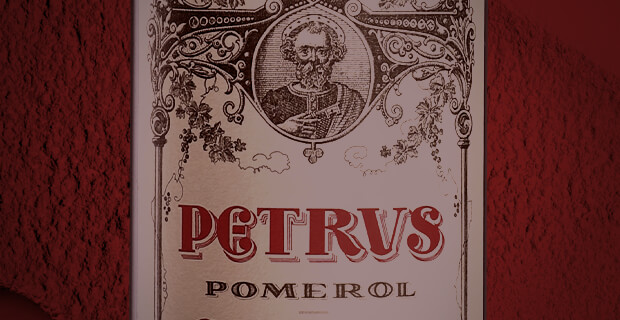 Merlot, born and raised in its ideal terroir, wafts forth from Petrus in the glass, wrapping the nose in an exotic, nuanced bouquet of cassis, violet, truffles and chocolate. This is a wine that floods the palate with a velvety smooth texture, lingering on like a dream for what seems like eternity. Discover the legendary vintages of Petrus, built to age and fully blossom after many years in the bottle.

Some Surprising Facts about “Chateau” Petrus

Before getting into the history of this legendary Bordeaux estate, here are some interesting facts you may not know about Petrus and its wines. Draped in mystery, Petrus in many ways represents an exception among the great chateaux of Bordeaux.

First, “Château Pétrus” is somewhat of a misnomer, albeit a very popular one. While many other estates nearby, notably Chateau Cheval Blanc and Vieux Chateau Certan, feature magnificent chateaux that tower majestically over their vines, you will find no such "Château Petrus" at Petrus. Here it is only the vineyard, not the castle, that is given the highest importance.

While many of the other great Bordeaux wines are rated through classification systems established in 1855 (for the reds of the Medoc and sweet whites of Sauternes and Barsac) and 1955 (a recurring classification for Saint-Emilion), the wines of Petrus are actually not classified. This is because the estate is located in the appellation of Pomerol, which has always rejected the limiting restrictions of a classification system based on quality.

Unlike many other Bordeaux wine estates, Petrus does not produce a second wine. Instead, they sell the fruit deemed not of high enough quality for their Grand Vin as bulk. Where this bulk ends up is a well-guarded secret. In some years, none of the fruit is deemed worthy of the Grand Vin, so no Petrus wine is produced. An example of such a vintage is 1991, a year of bitter April frosts on the Right Bank of Bordeaux. Petrus is also one of the most commonly counterfeited wines in the world. Clearly, any bottle of Petrus 1991 will be fake.

The History of Petrus Wine

The name Petrus first appeared in written records in 1837, when many of the prestigious chateaux of the Medoc, on Bordeaux' Left Bank, had already been established. At this time, the estate constituted only 7 hectares (17 acres) and was owned by the Arnaud family. Despite not having been classified, the wines of Petrus already enjoyed a great reputation at this time, winning a gold medal at the Paris Exhibition of 1878.

The Arnaud family gradually sold the estate to Madame Edmond Loubat between 1925 and 1949. Soon after acquiring the estate, Madame Loubat commissioned a new label for its wine, one which depicts St. Peter with the keys to Heaven. A few years later, she commissioned a statue of the saint, which can still be found at the estate today. While Madame Loubat never doubted the potential of Petrus, it was undeniably the passionate Jean-Pierre Moueix who made the estate’s wine one of the most recognized around the world.

Originally from the Correze region, Jean-Pierre Moueix found a new home in Libourne, where he established his own wine merchant business. In 1945, he obtained the exclusive rights to sell Petrus. Instead of focusing on the domestic market, which still associated the concept of “grand vin rouge” (fine red wines) with the Medoc, Moueix decided to market the wines of Petrus abroad, in the United Kingdom and United States. In the 1950’s and 1960’s, Petrus became one of the favorite wines of the Kennedy family, cementing its reputation among the American public. Petrus was served at the Royal Wedding of Princess Elizabeth and Prince Philip in 1947 and also made an appearance in 1953 at the Queen’s coronation.

Madame Loubat remained a passionate “vigneronne” until her passing in 1961, after which Petrus was divided between her niece Lily-Paul Lacoste-Loubat and nephew M. Lignac. Moueix was also given a small share as a way to keep him involved in the estate’s destiny. In 1964, Jean-Pierre Moueix acquired M. Lignac’s shares. It was in that same year that Petrus hired talented winemaker Jean-Claude Berrouet, who - together with viticulturist Michel Gillet – would produce 44 vintages and elevate the wines of Petrus to their modern-day glory. In, 1969, the Petrus estate was expanded with the purchase of 5 hectares (12 acres) of vines from Chateau Gazin. Eventually, the Moueix family also purchased Mme. Lacoste-Loubat’s shares, becoming the sole owners of the estate.

One of the most important vintages for Petrus was the 1982, lauded by the world's most influential wine critic of the time, Robert Parker. Although Petrus wines had already been renowned for their quality, Parker's reviews lead to even greater international recognition and boosted the price of these wines significantly. Following the death of Jean-Pierre in 2003, his oldest son Jean-François Moueix became manager of the property, while younger brother Christian Moueix took the role of Technical Director.

At the end of the 2007 vintage, Jean-Claude Berrouet retired, remaining a consultant for Petrus. With the 2008 vintage, Jean-Claude’s son Olivier Berrouet took over the reigns as winemaker. During the "Moueix regime" at Petrus, several changes were made. Cabernet Franc, which during Madame Loubat's ownership of the estate represented around 20% of the total vineyard, was reduced to only around 5%. This varietal only entered the Grand Vin in very ripe years.

And after the 2010 harvest, the 0.5-hectare patch of Cabernet Franc vines was uprooted altogether. Since then Petrus wines have been made with exclusively Merlot grapes. This was a decision based on terroir, as the Moueix family believe that the cooler climate and clay soils of the estate are better suited to Merlot than any other varietal. Already in the early 1970's, Christian Moueix pioneered the use of organic methods (i.e. crop thinning) in management of the Petrus vineyard, well before these became fashionable. The estate has also modernized its wine cellar, with an optical sorter replacing manual sorting in 2009.

Terroir and Winemaking at Petrus

To understand how the wines of Petrus have earned their reputation as some of the best in the world, it is first necessary to understand the terroir of this gem-like site. Today, the Petrus estate includes 11.4 hectares (28.4 acres) under vine, planted exclusively to Merlot since 2011. The vines of Petrus are planted in a patch of land with a unique second layer of rare blue clay soil, at an altitude of 40 meters, on the top of the highest point of the plateau of Pomerol. The site is also home to subsoils of hard iron, known as crasse de fer.

In fact, Petrus is the only vineyard in Pomerol entirely composed of blue clay soils, which date back 40 million years, while the rest of the appellation is characterized by thick gravel, dated only 1 million years. This ensures great drainage, since drops of rain can permeate the clay and become available to the vines in the dry months of summer. The blue clay layer also forces the root systems of the vines to spread sideways, which is believed to give Petrus its signature smooth tannins.

The 100% Merlot vines of Petrus are left to reach a very old average age, replanted after only 70 years. The vineyard team carries out ploughing and weeding three to four times per year and plants a weed to dry out the soil after rain, which is late ploughed into the soil as a form of organic fertilizer.

Harvest is strictly manual, taking place only after the morning dew has fully evaporated in order to avoid dilution. Every possible measure is taken to make sure harvest occurs under optimal sanitary conditions. In rainy vintages, Petrus has used plastic sheeting to shield the soil or even helicopters to fan dry the vines after a downpour.

At the winery, stemmer-crushers are used to remove the stems before a gentle crushing. Fermentation then takes place in vats of concrete, with maceration usually lasting between 15 to 21 days to encourage a slow and steady extraction of tannins. The wines are pumped over once per day, half in the morning, the other half at night. After maceration, the wines are transferred to another vat for malolactic fermentation, after which the wines to be included in the final blend are selected.

The blend is matured in oak barrels, of which only 50% are new and even these new barrels are soaked for 15 days in water to rid them of any overwhelming flavors. The wines are aged for a length of time determined by the characteristics of each vintage, between 18 to 20 months. The wine is then bottled without filtration.

But what is it that has true wine lovers spending thousands of dollars per bottle on Petrus wine? On the one hand, it is one of the rarest wines of Pomerol. Unlike many other Grand Vin wines of Bordeaux, the distribution of Petrus is extremely limited. But it’s also the inimitable signature style of the estate.

The wines of Petrus extraordinarily complex, with an exotic quality that set them apart from the classic wines of Bordeaux. On the nose, a remarkably nuanced bouquet reveals cassis, violet, cinnamon, plum, black cherry and truffle, along with the dark chocolate notes typical of Merlot. This rich, full-bodied wines offer a velvety smooth texture on the palate, intense flavors and a shocking length. A vintage of Petrus should always be aged in bottle for at least 15 years before tasting, although many vintages can age and develop beautifully for more than fifty years. Some of the best recent vintages of Petrus include the 2000, 2009, 2010, 2015 and 2016.