Since its founding in 1972 Caymus has been considered a benchmark for Napa Valley Cabernet. The estate’s signature style is known for its deep color, rich fruit aromas and smooth, ripe tannins

A winner in the legendary 1976 Judgement of Paris, the Stags Leap Cabernet Sauvignon is one of the most successful expressions of this varietal, offering unparalleled intensity, richness and elegance on the palate.
Products (151)

Cabernet Sauvignon is the most planted grape variety in the world and is a red wine grape of relatively recent origin. Cabernet Sauvignon comes from a cross between Cabernet Franc and Sauvignon Blanc and is late-maturing, vigorous and rather resistant to diseases and pests. Although its yields are quite low, this grape variety has become famous for the quality of juice it produces.

One of the best Cabernet Sauvignon terroirs is that of the Bordeaux region, where it is used in conjunction mainly with Merlot , but also with Petit Verdot, Cabernet Franc and, more rarely, Malbec and Carmenere. King of the Left Bank, Cabernet Sauvignon has helped to make the great chateaux of Medoc famous before being adopted in wine regions all over the world. Cabernet Sauvignon is now considered an international varietal and is found in very diverse regions such as Napa Valley in California, where it is used to produce some of the greatest wines in the world, in Chile, in the Italian Super Tuscans (Tuscany) and even more recently in China, where it has been heavily planted in recent years.

The red wines made of Cabernet Sauvignon are characterized by an intense color. They tend to offer aromas of red fruits, blackcurrant or black cherry, along with the occasional black pepper or violet. They can evolve complex notes of mint and chocolate. The thick skins of Cabernet Sauvignon grapes make for full-bodied wines with lots of color pigments and tannins, designed to be aged in the bottle. Because of this characteristic, it is a red wine grape variety that combines very well with oak barrels and becomes suppler in aging. 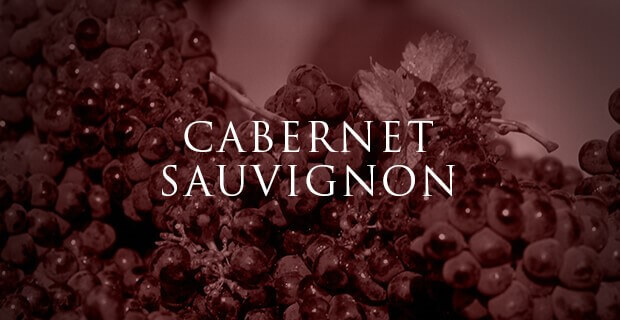 Cabernet Sauvignon: The History of a Historic Grape

Easy to grow, Cabernet Sauvignon owes its popularity to its thick skin, which makes it resistant to high temperatures and rot. It can be grown nearly anywhere and contributes an unmistakable structure and balance to the wine. Generally speaking, this varietal offers aromas of red fruits (blackcurrant or black cherry), along with the occasional black pepper or violet. The thick skins of Cabernet Sauvignon grapes make for full-bodied wines with lots of colour pigments and tannins, designed to be aged in the bottle. As it ages, Cabernet Sauvignon wines reveal more complex aromas of blackcurrant, violet, cedar, spices and even cigar boxes. One of the most notable characteristics of Cabernet Sauvignon is its affinity for oak, whether during fermentation or in barrel ageing. This contact with wood not only softens the tannins of the wine but also brings complexity by adding aromas to the already present notes of black fruits.

Hailing from France, Cabernet Sauvignon is now well known as an international variety. It is widely planted and can be found in most of the major wine producing regions. Because of this, it also has widespread appeal. Cabernet Sauvignon is considered one of the most balanced and full-bodied wines in the world. It was one of the main grape varieties that helped colonized the wine world, as it had an ability to be grown in most environments.

The Range of Cabernet Sauvignon and where it Finds its Roots

The Cabernet Sauvignon grape is small and has thick, dark skin; it grows in nearly all wine growing regions and is adaptable to different soil types and climates, including colder regions, like Ontario, or warmer areas, such as Argentina. Although the grape can grow just about everywhere, Cabernet Sauvignon thrives in warmer climates with poor, deep gravel soils.

Two prime examples of the best conditions in which to grow Cabernet Sauvignon are Bordeaux, specifically the Médoc and Pessac-Léognan areas, and Napa Valley. In these areas, the wine exhibits the classic characteristics of a deep, ruby colour with aromas of blackcurrant, dark spices and cedar wood. The wine also typically has moderate acidity with good tannin structure allowing it to age remarkably well over several years or even decades.

Another prominent area producing lovely examples of Cabernet Sauvignon is Tuscany, where wine producers create a blend of native grapes with the International grape varieties including Cabernet Sauvignon for what is called “Super Tuscans.” In Tuscany, Cabernet Sauvignon offers mellow wines with notes of ripe black cherry and strong flavours of blackcurrant.

All around the world Cabernet Sauvignon

As Cabernet Sauvignon is the most planted wine grape in the world, various styles are to be discovered.

Bordeaux offers great wines. The best sites are located on gravel hills that drain water and retain heat to facilitate maturation. Bordeaux's oceanic climate is ideal because the autumns are long and warm. Young Bordeaux wines can be quite harsh, but with age the tannins soften and the aromas of black fruits evolve towards more complex vegetal aromas of tobacco and cedar.

In California, Cabernet Sauvignon is the most planted grape variety. The grape variety has different styles depending on the soil and climate in which it is grown. Indeed, in Napa, mountain vineyards have fine and less fertile soils. The grapes are smaller but the aromas are more intense. The harvests are significantly lower than in the rest of California. Cabernet Sauvignon wines grown in California tend to be more delicate with a dark colour and aromas of blueberry, blackberry and oak. The wine is generally structured with ripe and melted tannins. In the same way as in Bordeaux, they require years of ageing to reach maturity. Oak is used for the ageing. Cabernet Sauvignon from the Napa Valley make part of some of the world most prestigious and sought-after wines. Washington State is also becoming a more prominent region for the variety.

Chile also produces beautiful Cabernet Sauvignon similar to the Bordeaux style, as the cooling breezes of the Pacific Ocean and the protection of the Andes Mountains create a great growing environment. In Chile, Cabernet Sauvignon is particularly influenced by the terroir. In the Maipo River Valley in Central Valley, Cabernet Sauvignon brings red fruit aromas. In warmer areas such as Colchagua Valley, the grapes have a longer maturation time and then offer a richer wine with less acidity and tannins.

Cabernet Sauvignon is very different in the regions of Australia. Indeed, the wines of the Coonawarra region are particularly intense and structured, with aromas of blackcurrant, black fruit, mint and eucalyptus. It was Coonawarra that earned worldwide recognition in the 1970’s for its Cabernet Sauvignon. Everywhere else in Australia, the style is very heterogeneous. The Barossa Valley produces structured wines. On the contrary, the Clare region offers fruitier Cabernet Sauvignon. And finally, in the Yarra Valley, wines can be tasted with an amazing balance of acidity, tannins and fruit. Cabernet Sauvignon is the second most planted grape variety in Australia after the Shiraz with which it is frequently blended.

In South Africa, Cabernet Sauvignon can be cultivated to produce single varietal wines as well as blends. For the blends, some producers follow the Bordeaux example with Merlot, while others follow the Australian model of a Cabernet Sauvignon and Syrah blend. The weather also has a significant influence on the type of wine produced. In cooler regions, the wine reveals herbaceous aromas with notes of green pepper. In warmer regions, protected from the freshness of the ocean (as in Stellenbosch), the wines are more robust. Levels of tannins are high. The Constantia region produces more herbaceous and mentholated wines. Cabernet Sauvignon remains the most planted grape variety in South Africa.

The grape variety’s popularity and structure allow Cabernet Sauvignon to be an ideal blending partner for most wine growing regions.  Tuscany has mastered blending Cabernet Sauvignon to create beautiful, well balanced wines, but the art of blending is a particularity of Bordeaux wines. The blends are made with the sole aim of seeking quality, finesse and nobility. Indeed, each Bordeaux grape variety has its own characteristics, acquired during its growth and maturation. Thus, the blend promotes the complementarity of the qualities specific to each grape variety and each terroir. It creates a more complex, harmonious and balanced wine with a powerful structure and deep flavours.

One of the best-known pairs is Cabernet-Sauvignon with Merlot. In fact, the majority of Bordeaux Blend wines are often made exclusively from a blend of these two varieties. In Bordeaux, there are two types of this traditional blend. The Left Bank (Médoc and Graves) is dominated by Cabernet Sauvignon, and in the Right Bank (Saint-Émilion and Pomerol) Merlot prevails. Cabernet Sauvignon offers acidity, herbal and black fruits flavours along with a mid-palate texture (tannins) that finishes on an oaky note. Merlot, on the other hand, adds body, texture and smoothness, which soften the acidity and level of tannins of Cabernet Sauvignon.

The Merlot, Cabernet Franc, Cabernet Sauvignon wines trio is also a well-known classic when it comes to the famous blends of Bordeaux. Cabernet Franc brings more delicate red fruit nuances, but keeps a mouth as long as Cabernet Sauvignon. The blend with the other two grape varieties offers more complex wines with a dynamic finish and spicy aromas, such as pepper.

Other varieties such as Petit Verdot, Carmenere and Shiraz have been used in blends with Cabernet Sauvignon to create beautifully complex red blends.