The world-renowned Opus One was created in the 1970's as a result of a merger between two visionaries, Baron Philippe de Rothschild (lengendary Bordeaux wine magnate and owner of Chateau...Read More

The world-renowned Opus One was created in the 1970's as a result of a merger between two visionaries, Baron Philippe de Rothschild (lengendary Bordeaux wine magnate and owner of Chateau Mouton-Rothschild in Pauillac) and Robert Mondavi (an icon in the history of American wine with a namesake wine empire in California). It was their aim to develop a New World equivalent to a Bordeaux First Growth in the Napa Valley region of California.

The exceptional style of Opus One resulted from the combination of their talent, their vision and the unique terroir of the Oakville AVA (an Eden for Cabernet Sauvignon). Today, this highly sought-after wine is produced from four different parcels, two parcels making up the famous 40-hectare To-Kalon vineyard, along with the River and Ballestra Parcels surrounding the Opus One winery. While the exact proportions depend on vintage, the blend is dominated by Cabernet Sauvignon, complemented by Cabernet Franc, Merlot and Malbec, reminiscent of Bordeaux's Left Bank. The wines are vinified separately before being matured in French oak barrels for a period of 18 months. They stay in the cellar, aging in bottle for another 15 months, before being released on the market in October of each new year.

Four years before his death in 2008, Robert Mondavi sold Robert Mondavi Winery to the Constellation Brands wine conglomerate, along with his 50% share in Opus One. The project, which also saw the addition of a new parcel known as To-Kalon South, is now jointly managed by the Rothschild family and Constellation brands.

In the world of fine wines, Opus One has no equal. Its emblematic blue label tells the story of the union between two visionaries, the merger of two dynasties to produce one iconic wine: a Bordeaux-style Grand Vin from the greatest terroirs of Napa.

Opus One | The Rise of a California First Growth

A wine whose name conjures up a sense of mystique and exclusivity, Opus One needs no introduction. The emblematic blue label represents the union of two visionaries, the merger of two dynasties, to conceive a world-class wine: a Bordeaux-style cuvee born from the greatest terroirs of Napa Valley. 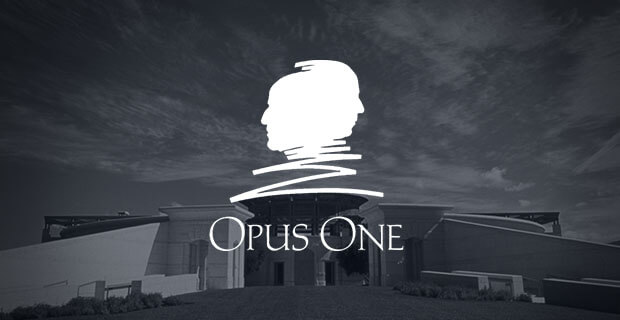 The Meeting of Two Worlds

The early 1970’s saw the formation of a friendship between the legendary Bordeaux wine magnate Baron Philippe Rothschild and Robert Mondavi, ruler of the eponymous wine empire in California. The two visionaries began to formulate a plan to create the equivalent of a Bordeaux First Growth in the Napa Valley region. In the year 1979, the dream became a reality with the first bottled vintage of Opus One, which was commercialized in 1984. The wine was made from the very best parcels of Mondavi’s estate, the famous 35-acre Q block of the To Kaylon vineyard. This very first release of Opus One cost $50 bottles, making it the most expensive California wine at the time and bringing unprecedented international attention to the Napa Valley region.

At this time, the wines were produced by Robert Mondavi’s son Tim Mondavi and Lucien Sionneau, winemaker at the prestigious Chateau Mouton Rothschild in the Pauillac appellation of Bordeaux. Coming from two very different backgrounds, the winemakers diverged in style, with Mondavi preferring rich, well-rounded wines and a more risk-taking attitude to winemaking, while Sionneau looked for structure and austerity in a conventional approach. Opus One emerged as a happy blend of these two styles. In 1984, Sionneau retired and Patrick Leon took his place, continuing to produce the wine with Tim Mondavi until 2000. In 1991, Genevieve Janssens, the Robert Mondavi Winery’s current Director of Winemaking, joined the team after spending two harvests at Chateau Mouton Rothschild in Bordeaux. In 1988, Baron Philippe de Rothschild passed away at the age of 86 and was succeeded by his daughter Baroness Philippine de Rothschild.

Opus One in a Modern Age

Opus One was originally made at the Robert Mondavi Winery, but moved to a state-of-the-art facility in the Oakville AVA in 1991. The modern techniques at the brand-new Opus One Winery, combined with a drastic improvement of vintage quality after a 5-year drought led to significant further improvement in the quality of the wines during the 1990’s. Beginning in 2000, Stag Leap Wine Cellar’s Michael Silacci was brought on board as winemaker at Opus One, later working with Philippe Dhalluin, the new winemaker at Mouton Rothschild. During this time, the team enhanced the diversity of vine clones in order to bring greater complexity to the wines.

Winemaking at Opus One

Today Opus One is produced from four different parcels in the western zone of the Oakville AVA of Napa Valley: two parcels forming the famous 40-hectare To-Kalon vineyard and the River and Ballestra Parcels, which form 28 hectares in total and surround the present-day Opus One Winery. The vineyards are, for the most part, managed with traditional practices, like manual harvest of the fruit. Nevertheless, modern winemaking and viticultural techniques are sometimes applied at the winery and out in the vineyards, but only after careful examination to determine whether they are indeed better suited to the vintage. The wine is a blend dominated by Cabernet Sauvignon, which is complemented with Cabernet Franc, Merlot and Malbec, true to the style of Bordeaux’s Left Bank. The various wine plots are vinified separately in stainless steel tanks before they are aged in barrels of new French oak for a period of around 18 months. They are then kept for another 15 months before they are released on the market on October 1st of each year.

Opus One is a wine designed to express the unique character of its terroir and vintage of origin in the purest way possible, without the winemaker’s fingerprints clouding that message. Standing out from among the often very ripe, jammy and indulgently sumptuous wines of Napa Valley, Opus One offers a certain elegance and restraint, faithful to its conception as the Bordeaux First Growth of California. As around one-third of the total production of Opus One is exported, the wine is designed with a more global clientele in mind, rather than just matching the American palate.

Starting in 1993, the estate also began to produce a non-vintage second wine named Overture from a blend of the same five varietals, in limited quantities. These wines have become known for a great elegance and complexity, worthy of their famous label.