The name Krug is synonymous with prestige. Founded in 1843 by Joseph Krug, the reputation of the house has been built and maintained over centuries by the distinctive style and unparalleled quality...Read More 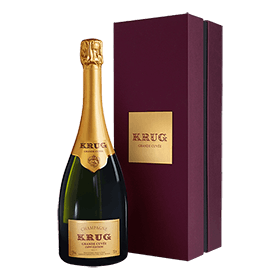 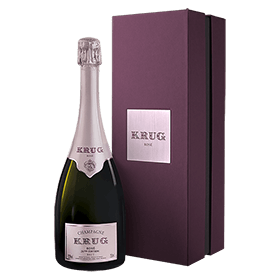 The name Krug is synonymous with prestige. Founded in 1843 by Joseph Krug, the reputation of the house has been built and maintained over centuries by the distinctive style and unparalleled quality of its champagnes. As the only House to produce five distinct Prestige Cuvées, many consider Krug the jewel in the crown of Champagne. Krug champagne is elaborated though the careful selection of 3 different grape varieties, which once blended, give the wine its singular character. Pinot Noir provides remarkable intensity and longevity while Meunier furnishes a rich and fruity character and Chardonnay adds finesse and elegance.

Have any questions about the Krug Rose Champagne price or about Krug in general? Do not hesitate to contact our team directly! 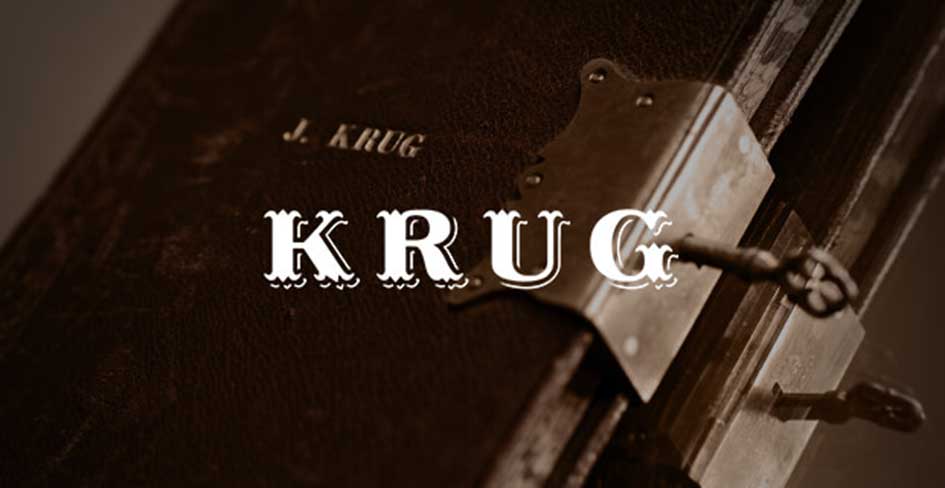 Immortalized on the pages of a cherry-red notebook in Reims is the vision upon which Krug was founded, a vision expressed in the handwriting of the house’s visionary founder Joseph Krug. His dream was to produce high quality champagne each year, despite variations in climate. He did so by building a vast reserve of wines over time, with many different plots, varieties and vintages represented. The elaboration of each cuvee by the prestigious Krug House of Champagne involves a meticulous selection of the perfect blend, comprising over 120 wines of 3 distinct varietals, spread over more than 10 different vintages. More than perhaps any other of its famous neighbors, Krug has become known for the amazing complexity of its signature blend, made of grapes plucked directly from the local terroir. It is, in fact, the rich diversity of plots forming Champagne's colorful topographical tapestry that inspires Krug Cellar Master Julie Cavil  (who recently took over from Eric Lebel) to each year compose a single, show-stopping champagne out of a symphony of flavors and aromas.

Joseph Krug and His Viticultural Legacy

The House of Krug was founded in 1843 by a man named Joseph Krug with the sole mission of capturing the true essence of Champagne. Since that year the House has remained devoted to the production of prestige champagnes, always with the founder's original philosophy in mind. Joseph Krug took terroir very seriously, knowing that quality champagne could only be achieved by using great wines separately vinified from great grapes, grown on various parcels around the region. But one thing seemed to trouble him: the level of impact that weather conditions from one vintage to the next could have on the quality of the wines. So, he began to build a collection of reserve wines, with which he experimented to determine the perfect blend. Krug believed that any great Champagne House should create 2 cuvees: a consistent expression of the Champagne terroir produced each year, and a vintage cuvee reflecting the conditions of a particular year, produced only in the best years. The decision was made early on to produce, from one year to the next, exclusively prestige champagnes, a trait that remains unique to Krug to this day.

Joseph Krug decided to immortalize this great vision in the pages of his cherry-red notebook, which he eventually left for his son Paul and which still remains at the estate today. Year after year, he would create a blend from his grand library of “vins clairs” (or base wines) in a style that would become the signature of the House. Krug’s notebook refers to this cuvee as Champagne No. 1, a wine that would one day become known as the Krug Grand Cuvee. Champagne No.2, an expression of the circumstances of a particular year as captured by Krug, would become Krug Vintage, a blend of the most beautifully expressive wines from a single year, only produced in vintages worth sharing with the world.

In the 1970's, the fifth generation of the Krug family - Henri and Remi Krug - decided to add a rosé champagne, inspired by Pinot Noir, to the range. The brothers also made a wonderful discovery: that the fifteen plots (1.84 hectares in total) of Chardonnay vines that they had purchased in Mesnil-sur-Oger were producing wines of magnificent quality. In 1979 they revealed the Krug Clos du Mesnil, an exclusive cuvee dedicated to only one plot of only one grape variety and in only one year. The Krug Clos d'Ambonnay cuvee was created just a few years later to express what the House considered its very best plot of Pinot Noir grapes. In 1999, Krug became part of the LVMH group.

Today, the Krug House of Champagne is run by Henri Krug’s son, Olivier Krug, representing the 6th generation of the family. The incredible passion and savoir-faire of the visionary Joseph Krug lives on in every drop of Krug Champagne.

Krug: The Individual and the Blend

The remarkable complexity of Krug's cuvees are achieved by simultaneously bearing in mind two distinct concepts: the singular character of each individual base wine and how they blend to create a whole that is so much greater than the sum of its parts. Always in line with the philosophy of the founder, the wines of Krug are treated as individuals, each with its own unique personality. Each plot of vines (of just one varietal between Chardonnay, Pinot Noir and Pinot Meunier) is harvested separately with very careful attention paid to the selection process. Each plot of grapes is vinified in its own individual neutral oak cask. During this time, each wine develops and comes to express its own individual character. The wines are then conserved separately in small vats, housed in a magnificent library of around 150 different reserves, including wines from 10 to 12 different vintages.

Once the individual wines reach their optimal form of expression, the time has come to produce the blend. Julie Cavil works closely with the Tasting Committee (which includes the most important members of the Krug team) to determine the recipe for each year's assemblage. Granted, Cavil has a head-start each year. From even before the harvest, he tastes the grapes daily in order to get to know the qualities of each plot and to begin thinking about how they will potentially contribute to the final cuvee. The blending process involves individual wines from a whopping 250 plots as well as 150 reserve wines from years before. In April, Cavil creates three different options for the Krug Grande Cuvee, among which only one is chosen to represent the signature style of the House each year. The Grand Cuvee ages in the cellar for at least seven years before release (at least five years for the Krug Rosé). The single-parcel Krug Clos du Mesnil and Krug Clos d'Ambonnay spend at least ten years in the cellar before becoming commercially available.

Krug: Its Editions and iD’s

The exquisite archetype of the Krug philosophy and the flagship of the House’s purely prestige range, the Krug Grand Cuvee is overall known for its exceptional finesse and dazzling complexity. On the nose, it may reveal toasted brioche, nougat or hazelnut, even blooming flowers, fresh apple, marzipan or honey. Meanwhile, the Krug Rosé is a daring and unexpected cuvee, often described as “more Krug than rosé.” Red berries harmonize perfectly with puff pastry on the nose, while floral fragrances and stewed fruit come through on the palate.

And while these two most representative Krug cuvees do maintain a signature style from one bottle to the next, each and every recreation is unique. Each edition of the Krug Grand Cuvee and Krug Rosé offers a unique adaptation of the founder’s vision. In order to learn more about a particular edition, the estate has created on their website the “Krug iD,” an easy way to access a rich database of information on each bottle of these two cuvees.

At Krug, each parcel of vines is treated as an individual with its own personality defined by a distinctive micro-terroir. And the wine produced from each of these parcels becomes an ingredient crucial in the carefully composed blend that is the Krug Grand Cuvée or Krug Rosé. To highlight the respect for each ingredient as central to the values upheld by Krug for centuries, the house selects each year one ingredient from the culinary world to focus on and explore in detail. In 2015 it was the potato, in 2016 the humble egg, in 2017 the mushroom, in 2018 the fish and in 2019 the pepper. And who better to study this relationship Krug X Ingredient than the curious and talented chefs of the Krug Ambassades, scattered in culinary capitals around the world? Each year, 10-15 chefs are chosen by the House of Krug to join Julie Cavil on a culinary adventure to the source of their target ingredient, on board a fishing boat on the island of Mallorca, through a pepper farm in Oaxaca, Mexico… These experiences allow the chefs to connect on a personal level with their featured ingredient.

Inspired by what they learn, the chefs then get busy transforming their star ingredient into edible masterpieces, which highlight each of their distinctive styles, while also complementing the aromas and flavors of the Krug Grande Cuvée or Krug Rosé. Year after year, the Krug X Ingredient challenge reveals the complexity of aromas and flavors in the Krug Grande Cuvee and Krug Rosé, a complexity that lends these signature cuvees to a vast diversity of food pairings.