Highly regarded for the quality of its wines already in Roman times, Pomerol is the smallest appellation in the Bordeaux region and covers an area of 813 hectares (0.7% of the Bordeaux wine...Read More

The characteristics of the Pomerol appellation are rooted in the nature of its celebrated terroir. Located in the region of Libourne and bordered to the east by Saint-Emilion, Pomerol is perched atop a plateau that descends with successive terraces towards a valley where the Isle and Dordogne Rivers meet. The terroir of Pomerol is best represented by its unique soil composition. On the surface, the soils are composed of compact gravel of a sandy-clay nature, while the base contain the famous "crasse de fer" (oxidized iron).

The unique terroir of the Pomerol appellation allows its dominant grape variety, Merlot, to express itself to the fullest. Cabernet Franc and Cabernet Sauvignon are also planted here.

The Grands Crus of Pomerol are famous for their unique style, one which combines the finesse of the wines of Burgundy with the richesse and length of great Bordeaux wines. The ruby red Grands Crus of Pomerol are distinguished by the complexity of their bouquet. Notes of ripe red fruits mingle with delicious and fresh flowers, among them violet and iris. Over time, sophisticated aromas of truffle and leather appear. On the palate, Pomerol wines express their full character through a dense and velvety texture, by which the power in the mouth is softened by firm, distinguished tannins. With great elegance, the finish ends with a combination of freshness and great depth. Pomerol Grands Crus, by their very nature, can easily withstand 30 years in the bottle, blossoming superbly with age.

Based on a 2,000-acre clay-rich gravel bank, whose boundaries remain unchanged since the time of their creation, pint-sized Pomerol defies the classic definition of Bordeaux, its grandiose chateaux, sprawling vineyards and all-important historic classifications. Pomerol is an appellation more modest in size, where terroir is emphasized over chateau, where tiny vineyards produce unclassified wines from rich and smooth Merlot leading spicy, structured Cabernet Franc. 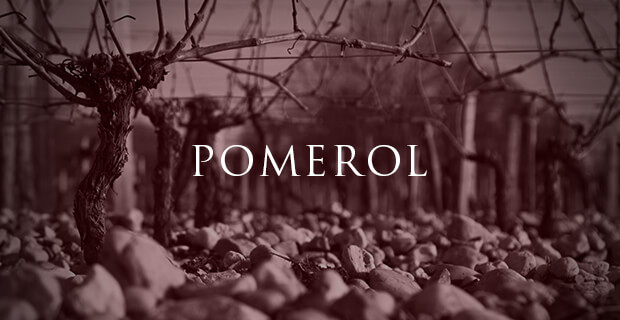 These wines are densely layered with aromas of black fruit and earth, with a certain purity from less new oak and silky-smooth tannins that make them approachable at a younger age than the big names across the river. Pomerol is a must-have in any wine lover’s collection, the perfect choice for a festive meal with family and friends.

The History of Pomerol Wine

While the Pomerol of today produces some of the most highly sought-after wines in the world, this appellation has a more recent winemaking history than those of the Medoc. In fact, Pomerol was one of the last Bordeaux wine regions to be fully planted to the vine. With the establishment of the commercial city of Libourne in 1270, this area saw some viticultural activity, although not nearly as much as neighboring Saint-Emilion.

By 1700, only a small part of Pomerol was under vine, planted mostly to Cabernet Franc and white varieties, which were gradually phased out by the mid-19th century. By this time, Chateau La Conseillante and Chateau L’Evangile had been established, followed by Château Trotanoy and Vieux Château Certan. With the completion of the railroad between Paris and Libourne, the reputation of Pomerol wine gradually expanded beyond the traditional Dutch market to Bordeaux wine lovers all around France.

Pomerol wine received AOC status in 1936, at which time it became an exclusively red wine region. Merlot, believed to have been planted here for the first time by Libournais wine merchant Louis-Léonard Fontémong in a vineyard now belonging to Chateau Rouget, slowly gained prominence.

It was during the 20th century that Pomerol wine really made it onto the international wine map. Jean-Pierre Moueix, widely considered the “guardian angel” of the Pomerol appellation, first arrived Libourne in 1937, setting up his own négociant business there. In 1945, he gained exclusive selling rights over the Pomerol wine Petrus. In the years that followed, Moueix began leasing and purchasing winemaking estates in Pomerol, including Trotanoy, Chateau Fleur-Petrus and Chateau Lagrange. With increased creative input in the winemaking process, he decided to expand beyond the traditional market of Belgium to the rest of the world. In 1964, Moueix acquired majority share of Petrus, taking over in the cellar and elevating Petrus wine to the quality it enjoys today.

The 1982 vintage brought about a new chapter in the history of the Pomerol region. Aided by strong reviews by Robert Parker, Pomerol wines achieved great success on the US market. Petrus became one of the most expensive wines in the world, propelling forward the reputation of the appellation as a whole.

Unlike the appellations of the Medoc, Graves, Sauternes and Saint-Emilion, Pomerol never had and still does not have a formalized classification system. Nevertheless, certain Pomerol wines (like Château Pétrus and Château Le Pin) have risen to the top of Bordeaux’s most famous bottlings, fetching some of the highest prices at auction.

Pomerol is the smallest of Bordeaux’s major fine appellations, covering 800 hectares (2,000 acres) in the Libournais area on the Right Bank of the Garonne, just east/northeast of the town of Libourne. The climate of Pomerol is similar to that of the Medoc, although the greater distance from the sea and Gironde estuary result in a more continental climate with less maritime influence. This translates into more significant diurnal temperature variation, which helps the fruit develop great complexity.

The terroir here is characterized by a diverse mix of gravel, sand and clay. The vineyards in the eastern section of the appellation tend to have slightly heavier soils with more clay in the composition. It is here, on the so-called Pomerol plateau near the border with St-Émilion, that some of the most famous Pomerol wine estates are located. The vineyards of Petrus, situated at the highest point of this plateau, are home to a “button” of unique iron-rich blue clay soils (known locally as crasse de fer), considered the best in the appellation. This soil yields incredibly concentrated and complex red wines with signature aromas of violets and truffle.

The clay soils of Pomerol act as a sponge during wetter seasons, soaking up and retaining moisture, which the vines can access in times of dryness. These clay soils create the ideal environment for Merlot, considered the flagship grape variety of the Pomerol appellation and representing roughly 80% of the total vineyard area. A Merlot-based wine produced in Pomerol tends to be rich and smooth on the palate.

As Merlot is a quite an early-ripening grape variety, it is quite susceptible to spring frosts. Nevertheless, Pomerol wine tends to be of higher quality in cooler vintages, as very hot vintages can result in an overripening of the Merlot.

In the Pomerol wine blend, Merlot is sometimes complemented by Cabernet Franc, which contributes structure and a savory spicy to the blend. Cabernet Franc accounts for roughly 15% of the vineyard area of Pomerol and 5-20% of the final blends. This varietal is usually planted in plots with more limestone soil. Cabernet Sauvignon and Malbec are also planted in plots with a higher percentage of gravel.

The Various Styles of Pomerol Wine

The Pomerol appellation today produces exclusively red wines, whose style depends largely on terroir of origin. For example, the sandier soils in the western region of Pomerol produce a lighter style wine. In the south, where there is more gravel in the soil, slightly less Merlot is planted and the wines are more Medoc-esque in style. Meanwhile, the dense clay soils in the east produce a concentrated and rich style, widely considered as the most representative of Pomerol overall.

The style of a Pomerol wine can also depend on the winemaking techniques adopted by the producer. For example, the Michel Rolland style wines made by producers in Pomerol during the 1980’s and 1990’s tended to be harvested later for a more intense physiological ripeness and higher alcohol, then left to macerate for an extended period of 3 to 8 weeks, and aged in new oak barrels. This resulted in racier, more concentrated, though sometimes overripe wines. The newer style adopted by the Moueix family is achieved through earlier picking, a gentle extraction and aging in less new oak to preserve the brightness and purity of the fruit.

The classic Pomerol wine tends to be a Merlot-dominant red wine with aromas of plums, plum preserves and prunes, sometimes black raspberries, red cherry compote or kirsch, along with touches of chocolate or mocha, licorice, truffle, tobacco leaf and menthol. Cabernet Franc can also lend a savory spiciness, hints of green or herbaceous notes. On the palate, these wines to be very fine, with velvety smooth tannins, very layered flavors and (in the best vintages) remarkably fresh fruit. The wines of Pomerol generally require less aging than those of the Left Bank. Just 5 years is usually sufficient, with 12-15 years enough for even the top bottlings.

How Best to Enjoy a Pomerol Wine

In order to fully appreciate the complex bouquet of a Pomerol wine, we recommend serving it cooler than room temperature, between 15 to 17° C (or around 60° F). A large-bowled glass with a tapered rim will do these wines most justice, allowing sufficient space for swirling while also directing the aromas toward the nose.

The black fruit aromas, earthy nuances and silky smooth tannins that characterize classic Pomerol wines make them particularly easy to pair with a wide range of food choices. Enjoy them with simpler dishes, like an herby roasted chicken or lamb chops. Or, pair them with turkey and roasted vegetables at Thanksgiving in the company of friends and family.