When King Charles VII knighted brothers Jean and Nicolas Moet in 1446, he established a lineage that would later give its name to the most beautiful saga in the history of Champagne.Back in 1743,...Read More 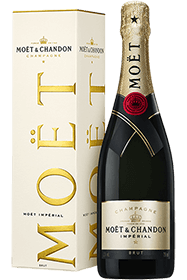 When King Charles VII knighted brothers Jean and Nicolas Moet in 1446, he established a lineage that would later give its name to the most beautiful saga in the history of Champagne.

Back in 1743, Claude Moet, a wine merchant, founded the Moet & Chandon Champagne House, quickly giving it a reputation of importance in great European courts. His grandson, Jean-Remy Moet, made Moet & Chandon an international hallmark of luxury and a symbol of celebration. Jean-Remy Moet was awarded the Legion of Honor by Emperor Napoleon Bonaparte, who had notably visited the estate in Epernay several times, and to which the house’s iconic champagne, Moet Imperial, pays tribute. Legend has it that the act of opening Moet & Chandon champagne bottles with a sword was invented by Napoleon and his troops to celebrate a victory.

Thanks to the genius of this family, the Moet & Chandon Champagne House has embodied and shared the charm of its champagne with the entire world for more than two and a half centuries now.

The house has been owned by the LVMH group since 1987. Each year, it undergoes a rigorous selection of terroirs, the uniqueness of which cellar master, Benoit Gouez, manages to magnify vintage after vintage.