The world of wine is full of fascinating stories and the story of Domaine Prieure Roch is especially inspiring. Born into the highly influential Leroy family of the legendary Domaine de la...Read More

The world of wine is full of fascinating stories and the story of Domaine Prieure Roch is especially inspiring. Born into the highly influential Leroy family of the legendary Domaine de la Romanée-Conti, a dynamic young Henri-Frederic Roch set out in 1988 to establish his own estate with a few parcels purchased in Vosne-Romanée. From early on, Roch and his trusted Number Two, Yannick Champ, focused on ancestral Burgundian techniques today referred to as organic and biodynamic. In the vineyard they eliminated chemical treatments and in the winery they introduced whole bunch fermentation with 100% naturally occurring yeasts, gravity-led remontage and pigeage by foot. The resulting wines were pure, genuine and alive in the glass, quickly gaining cult status among sommeliers around the world. Although the Henri-Frédéric Roch passed away tragically in November of 2018, the unique winemaking philosophy of this iconic Burgundy vigneron will live on, immortal, through the estate’s distinctive cuvées. 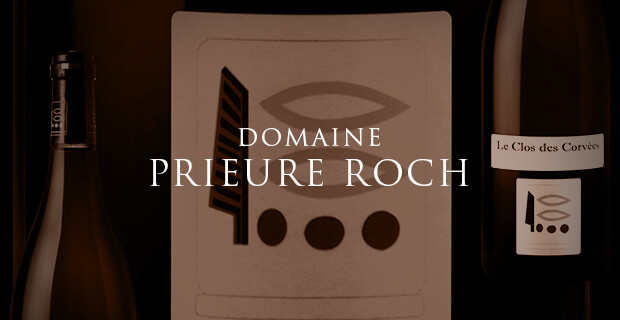 The History of Domaine Prieure Roch

The story of Domaine Prieure Roch begins in 1988, when a young Henri-Frederic Roch (Co-Director of Domaine de la Romanee-Conti and nephew of Lalou Bize-Leroy) purchased some vineyard parcels in the Vosne-Romanee wine appellation from the legendary Domaine de la Romanee-Conti. These parcels included the Clos Goillotte vineyard, which Roch visited and fell in love with 9 years before, in 1979. Inspired by the Bordeaux producer Château Prieure-Lichine, he decided to name his estate « Domaine Prieure Roch », meaning the “Priory Roch” estate, or DPR for short.

Gradually, Roch expanded his vineyard holdings from the original 10 acres to 34 acres, mostly located in Vosne-Romanee of the Cote de Nuits region in the Burgundy wine region. He also started making wine from holdings in Clos de Vougeot and Chambertin “Clos de Beze,” along with a 12-acre monopole, Nuits-St-Georges Premier Cru “Les Corvées,” supposedly Roch’s favorite plot. In 2010, Roch acquired a few hectares in the Cote du Beaune, from which he began producing the Ladoix Chardonnay. From early on, Roch opted for an ancestral minimal intervention approach to viticulture, methods that are today known as organic and biodynamic. Since the 1990’s, the estate has been known for its strict minimal yield policy in the vineyard. In 1995, Roch stopped adding sulfur to his wines, choosing instead to rely on a completely natural vinification.

In 2005, Roch hired Yannick Champ, fresh out of the University of Dijon with a Master’s Degree in vineyard studies, to join the team as Cellar Manager. In 2010, Yannick became Co-Director of the estate and today represents, along with the founder, the spirit of Domaine Prieure Roch. The terroir-first philosophy behind this one-of-a-kind domaine is beautifully represented by its wine labels, which features only the vintage and the name of the wine, but no mention of the winemaker or estate. The distinctive Prieure Roch logo that graces each bottle is borrowed from the winemaking hieroglyph of Ancient Egypt and was inspired by Roch’s time working in the Nile Valley. The two yellow mouths, three red eggs (three grapes, each one with its own unique shape) and the papyrus leaf form an abstract illustration that symbolizes Roch’s winemaking principles.

In November of 2018, Henri-Frederic Roch passed away at the age of 56. The unique winemaking philosophy of this iconic Burgundy winemaker lives on, immortal, through the estate’s distinctive cuvées.

Out in the Vineyards of this Burgundy Icon

The vineyards of Domaine Prieure Roch are scattered across several different appellations of Burgundy’s Cotes de Nuits and Cotes de Beaune regions. The entire estate is certified for organic viticulture and the lack of chemical treatments initially led to a dramatic natural decrease in yields to around 15 hectoliters per hectare in the early years. Eventually, as the vineyard ecosystem regained its balanced, the yield edged up to around 25 hl/ha. Instead of chemical fertilizers, the soils are “fed” only with a natural compost made from grape mark, vine shoots and cow manure. Instead of applying herbicides, the vineyards are weeded manually. Each parcel is treated on an individual basis and the viticulture tailored to the needs of each terroir.

In the northern area of the Cote de Beaune, in the appellation of Ladoix Villages, the “Le Clou” plot is planted with 4 acres of Pinot Noir wine and just under 1 acre of Chardonnay. This cru was acquired by the estate in 2010 and has since then been trained in the philosophy of Prieure Roch. The vineyard produces delightful, easy-drinking wines full of fresh fruit and a voluptuous texture. Meanwhile the “Le Clos de Corvees” covers 12.8 acres of Pinot Noir vineyards in the Nuits-Saint-Georges appellation, near Premeaux, making it one of the largest single-owner Premier Cru monopole vineyards on the Cote de Nuits. Here, harvest is focused on “millerandés” grapes, which are fully ripe but undersized and thus very concentrated in flavor. These grapes produce powerful, full-bodied, structured and dense wines with a very long finish.

A Minimal Intervention Approach at the Winery

At Domaine Prieure Roch, the grapes are harvested exclusively by hand, often in several passes and with a focus on selection. For some cuvees, “millerandés” (undersized) grapes are chosen. One particularity of the estate is that the team uses whole bunches in the vinification of all of their wines in all vintages. Therefore, it is of utmost importance to harvest only when the stems are fully ripe, generally later on in the season. Not destemming the grapes results in a natural maceration inside of the grape, which leads to a complexity of aromas. Stems also help the yeasts to circulate inside the tanks, which allows for an even fermentation.

The musts are left in the tanks for a pre-fermentation maceration before alcoholic fermentation takes place. The musts are vinified using 100% indigenous yeasts naturally present on the bloom of the grapes. After all, the various yeast strains that inhabit the different parcels are considered part of the distinctive terroir of each vineyard and thus maintained to allow for greater terroir expression in the wines. Moreover, the diversity of naturally occurring yeast strains allows for several fermentations to take place, one after another, producing more complex and balanced wines. No sulfur is added during this stage, as it could potentially harm the yeast.

Alcoholic fermentation is allowed to take place naturally, yielding whatever alcohol content is characteristic of the vintage. No water is added to reduce the alcohol in hot vintages like 2003, where the wines were at 14.8% abv. Nor does the team chaptalize in years where the musts yield wines with alcohol levels of around 12%, as in 2008. Instead, the alcohol level is considered a pure and honest reflection of the vintage at the estate.

During fermentation, the team carries out “remontage” a few times in order to activate some of the yeasts. Instead of a pump, they use a trolley, a tank and an electric left to do this, in order to be as gentle as possible and not to disturb the yeast. “Pigeage” is carried out twice per day by foot, according to the ancient method, since this allows the team to obtain information about each batch, such as cap density and juice temperature, which a machine could not gather.

The wines are barreled once the fermentations are complete, usually before October and November. They stay in barrel for around 18 months for “villages” wines and 24 months for the Premier Cru and Grand Cru wines. In fact, the team would prefer to age the wines for longer, but space in the cellar is limited. After around 20 to 22 months of aging, the team drills holes in the barrels in order to rack the wine off its gross lees without disturbing the aging process too much. As the wines are not filtered before bottling, it is crucial to rack the wines at the right time.

The wines of Domaine Prieuré Roch have gained a cult following around the world for the outstanding quality and genuine, honest terroir expression of its Burgundy wines. This is Pinot Noir that is alive, with incredible energy and a brilliant acidity on the palate. The fruit is perfectly ripe and complex, complimented by earthy notes and a mineral touch, depending on terroir.

The Ladoix Village “Le Clou” is a fruit-forward beauty with bright aromas of red berry fruit, like raspberries, strawberries, redcurrants and red cherries. On the palate it is quite voluptuous, with a nice structure and fresh acidity, characteristics that will no doubt allow it to age nicely, though this wine is also perfectly approachable in its youth. It will pair effortlessly with a wide range of dishes, from cheese and charcuterie boards to a roasted chicken seasoned with herbs.

Since 2002, the Nuits-Saint-Georges 1er Cru “Les Clos de Corvees” Monopole has been produced from “millerandés” grapes, which are fully ripe but small in size and thus produce wines with very concentrated flavors. Displaying an intense ruby color in the glass, this exquisite Pinot Noir reveals an earthy, spicy nose with resplendent black fruit aromas. The palate is incredibly balanced, with flavors of freshly picked, ripe blueberries and licorice, which linger on a seemingly infinite finish. A completely genuine expression of Henri-Frederic Roch’s most prized plot, this wine fully encapsulates the spirit of the estate’s visionary founder. Save it for a special occasion, to enjoy with noble yet genuine dishes, like risotto with fresh truffles or roasted pheasant with wild mushrooms.