Classified as a Third Growth Chateau in 1855, Chateau Giscours has a long and rich history which can be traced to the 14th century. In 1995, the chateau was bought by Eric Albada Jelgersma,...Read More

Classified as a Third Growth Chateau in 1855, Chateau Giscours has a long and rich history which can be traced to the 14th century. In 1995, the chateau was bought by Eric Albada Jelgersma, who also owns neighboring Chateau du Tertre, who invested in modernizing its cellars and vineyards. Today the Giscours vineyard is one of the largest in the left bank with 165 hectares in total; 102 hectares lie within the Margaux appellation. 60% of these vineyards are planted to Cabernet Sauvignon, 32% Merlot, 5% Cabernet Franc and 3% Petit Verdot. The terroir is composed of mostly gravel with sand and some limestone, on average the vines are 50 years old however there are old vines of Cabernet Sauvignon and Merlot that reach 70 years of age. Chateau Giscours wine is rich and dense in its youth that requires decanting in order to soften its tannin. The wines of Chateau Giscours requires at least 10 years of bottle age before they can be enjoyed.

As Salvador Dalí once declared “Who knows how to taste wine never drinks wine again, but tastes secrets instead.” It goes without saying that just one swirl and a sip of a wine from Chateau Giscours will expose all of the secrets of your taste buds. Indeed, the mysteries a Chateau Giscours wine can reveal on your palate supports its distinction as an acclaimed Third Grand Cru Classé of 1855 ranking. 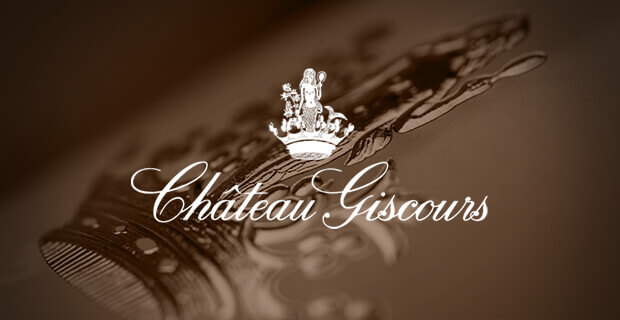 The glorious renaissance of Chateau Giscours

Chateau Giscours is one of the crown jewels of the Margaux appellation that has the distinguished Third Grand Cru Classé of 1855 classification. This estate has a glorious history that had its beginnings in the fourteenth century as a defensive dungeon that stood in the midst of a wild, ravaging countryside. However, Pierre de Lhomme, a wealthy Bordeaux draper, tamed this wildness with vines and built an expansive estate overlooking his vines in 1552. One of the most notable owners afterwards was the Count of Pescatore who not only transformed the Chateau Giscours into the neoclassical palace as we know it today after his purchase in 1845, but also enlisted the help of Pierre Skawinski, who still retains the title of being one of the most respected grape growers in all of Bordeaux. His 50-year tenure at the estate led to the revolutionary idea of using gravity in cellars during the winemaking process, and Chateau Giscours was a part of this technological development that is now used in most of the top Bordeaux estates. Into the modern era with Nicolas Tari’s purchase of Chateau Giscours in 1954, he helped in the rebirth of the chateau with the use of the know-how he gained living in Algeria as a winemaker. Chateau Giscours then landed in the capable hands of Dutch businessman, Eric Albada Jelgersma, in 1995 who undertook the entire renovation of the property to give Chateau Giscours all of the nobility it should have as a Third Grand Cru Classé estate. A large part of this modern renaissance is due to the efforts of managing director, Alexander van Bee. Part of this renewal included replanting vines with a considerable increase in Cabernet Sauvignon and the switch from machine to hand harvesting. Because of these innovations, vintage after vintage continues to show improvement worthy of its acclaimed status.

Flawlessness from the vineyard to the bottle

The finest vintages from Chateau Giscours with their ripe cassis fruit and silky texture start in the 102-hectare vineyard in which the king is Cabernet Sauvignon at 60% and then Merlot at 32%. The remaining is 5% Cabernet Franc and just a bit of Petit Verdot at 3%. Chateau Giscours’ sublime terroir consists mostly of gravel with sand and a bit of limestone in the soils, which grows vines that are on average 45-years-old. However, the oldest Cabernet Sauvignon and Merlot vines are up to 70 years of age. With the greatest respect for the terroir, Chateau Giscours uses biodynamic practices on a part of its vineyard, but it plans to expand these practices to cover a greater percentage in the next few years. Once the berries are hand-picked at their perfect ripeness, Chateau Giscours uses both stainless steel vats and concrete tanks to vinify its supple wines. They are then aged in French oak barrels in which 50% are new for a period of up to 18 months. During this time, the wines gain their complexity and achieve the ultimate balance of black fruit and oaky spiciness to give wines elegance and finesse – all the markers of a classic Margaux.

The Chateau Giscours (Margaux), the estate’s first wine and its Grand Cru Classé of 1855, is a wine of great persistence. The blend consists of 60 % Cabernet Sauvignon, 32% Merlot, 5% Cabernet Franc and 3% Petit Verdot, and has an estimated aging potential from 8 to 20 years. The Sirene de Giscours (Margaux), Chateau Giscours’ second label, comes from a blend of grapes from young vines. The care and attention in winemaking and aging that goes into the first label is the same as for the second wine to give another elegant Margaux. The Chateau Duthil (Haut-Medoc) is a Cru Bourgeois wine with a blend of 55% Cabernet Sauvignon and 45% Merlot. It comes from plots in the Haut-Medoc, and vinified in the cellars of Chateau Giscours. The wine is aged for 12 months in French oak with 35% in new barrels. The persistent aromatic bouquet and its balance make this a wine of exceptional quality. Haut-Medoc of Giscours (Haut-Medoc AOC) is a 50% Cabernet Sauvignon and 50% Merlot blend from some of the most beautiful terroirs in the Haut-Medoc appellation. The Chateau Giscours team ages the wine for 12 months in French oak with 20% in new barrels to give an elegant wine. The Rosé de Giscours (Bordeaux Rosé AOC) is 100% Cabernet Sauvignon and is the result of direct pressing. The freshness and aromatic citrus notes of this rosé makes this another elegant Chateau Giscours wine.

All of the vines, terroir and winemaking precision of Chateau Giscours shines through in the expressions of each of its vintages, all of which have been part of a revolutionary past and will continue to be a part of its ongoing renaissance.