Chateau Angelus, a Saint Emilion Premier Grand Cru Classe A, was given its name because all three Angelus bells from the surrounding village churches can be heard ringing in the vineyards....Read More

Millesima relies on an experience of over 30 years in the fine wine sector and is one of the greatest Place de Bordeaux wine futures buyers, with 840,000 bottles purchased per year on average.

The Bordeaux campaign of Wine Futures, which is also named Primeur, is a way for customers to invest in new vintage wine from Bordeaux chateaux during a time when they are still in oak barrels. The Futures campaign of Bordeaux helps customers purchase the wines before they are released in bottle.

The Millesima team tries to offer the most extensive range of wine futures, which are always purchased directly at the chateaux. Once they are bottles, these wines are shipped out to our clients, 18-24 months after the initial purchase date.
Products (17)
RP90-92
JS94-95
BD93-94

Chateau Angelus, a Saint Emilion Premier Grand Cru Classe A, was given its name because all three Angelus bells from the surrounding village churches can be heard ringing in the vineyards. Chateau Angelus has been in the de Bouard de Laforest family since 1782. Chateau Angelus is a vineyard that is in a south facing slope of Saint-Emilion. Water is drained naturally thanks to the slope. Limestone and clay provide the vines with the nutrients that they need to produce well-structured wines. The grapes are distributed on the land, based on the soil type. Cabernet Franc (47%) is on the sandy-clay limestone at the bottom of the hill and Merlot (50%) is on the hill. The last grape variety grown on the property is Cabernet Sauvignon (3%). The Cabernet Franc vines tend to reach their peak at the age of 20 years old. Due to their ideal location Angelus and its second wine, the Carillion of Angelus, are known to be a perfect expression of the marriage between Cabernet Franc and Merlot. A silky wine with a high level of ripeness, Angelus gives forth a surprising fresh character with its flavors dominated by flowers, red fruit, vanilla and liquorice.

Chateau Angelus | An Icon of Saint-Emilion

Named after a daily prayer, the tolling of a bell to signal a shared moment of devotion and spirituality that dates back centuries, Chateau Angelus stands as a steadfast symbol for one family’s dedication to and stewardship of their ancestral land. Stephanie de Bouard-Rivoal today represents the eight generation of her family at the helm of this Premier Grand Cru Classe “A” estate, which has in the past few decades served as a benchmark for quality and modern winemaking in Saint-Emilion. 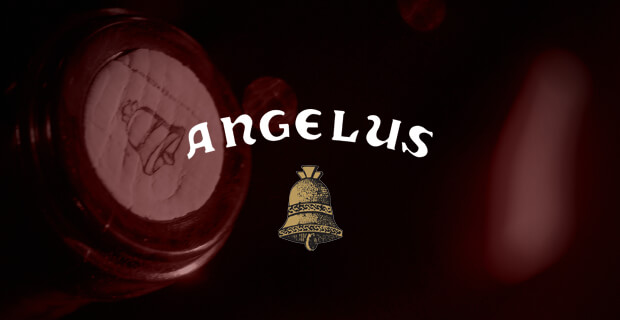 The chateau’s 100 acres of vines are planted on a superb natural amphitheater of clay, limestone, gravel and sandy soils, organically cultivated for over a decade. Almost half of that acreage is dedicated to Cabernet Franc, a varietal that forms an important component of the Angelus blend and lends the wine its signature spicy and menthol touches. At Angelus, each unique vintage gets a nickname, the sublime 2020, the flamboyant 2018, the brilliant 2017, the magnificent 2015... What these wines all have in common is a timeless elegance, an undeniable charm and an unparalleled air of exoticism.

The History of Chateau Angelus

A great name in the Saint-Émilion appellation, Château Angélus boasts an illustrious history, intrinsically intwined with the genealogy of a single Bordeaux family. The de Boüard de Laforest family tree can be traced back to Georges Bouard, a Jurat of Bordeaux born in 1544. In 1782, Jean de Boüard de Laforest settled in the Saint-Emilion region and his daughter, Catherine Sophie de Bouard de Laforest married Charles Souffrain de Lavergne, owner of Domaine de Mazerat. Nearly a century later, in 1909, the Mazerat estate was inherited by Maurice de Boüard de Laforest, who expanded it through the acquisition of the 7.5-acre Clos de l’Angelus in 1920, along with a plot of land from Chateau Beau-Sejour Becot. It is at this point, that Chateau Angelus as it stands today was born.

In 1945, Maurice de Boüard de Laforest left the family holdings to his sons Jacques and Christian de Boüard de Laforest, who continued to expand it. In the very first classification of Saint-Emilion wines, which took place in 1954, Angelus earned the title of Grand Cru Classé. In 1985, Jacques’s son Hubert de Boüard de Laforest took over the reins of the estate, which by this point expanded over more than 50 acres of land.

A graduate oenologist of Bordeaux University and an innovative, ambitious figure, Hubert de Boüard de Laforest is credited for bringing Chateau Angelus into the modern age and elevating the quality of its wines. He began experimenting with Burgundian techniques, like whole bunch fermentation in open-top vats and vinifying the grapes on a plot-by-plot basis. Out in the vineyard, he lowered yields, increased planting densities, introduced green harvesting and fine-tuned the selection process. He also began aging the wines in new French oak barrels and changed the name of the chateau from L’Angelus to Angelus so that it would appear first on alphabetized lists. In 1996, Angelus was classified a Premier Grand Cru Classe of Saint-Emilion. Hubert was joined, in 1987, by Christian’s son-in-law Jean-Bernard Grenie and, in 2012, his daughter Stephanie de Bouard-Rivoal.

Today, Stéphanie de Boüard-Rivoal represents the eighth generation of her family and the third woman at the helm of Chateau Angelus. A devoted steward of the land, Stephanie feels an almost spiritual connection to the ancestral land of her family and sees herself as part of the natural ecosystem of the Angelus vineyards. In the 2012 St Emilion classification, Chateau Angelus was ranked a Premier Grand Cru Classé “A,” the appellation’s highest classification level.

The wines of Chateau Angelus are no strangers to the silver screen, having made not one but three appearances in three different James Bond films in the past two decades. The wine made its debut in Casino Royale (2006), when a bottle of the 1982 vintage is enjoyed by the secret agent and Vesper Lynd on a train to Montenegro. In Spectre (2015), a bottle of the 2005 makes another appearance in an action-packed scene, once again on a train. Most recently, a bottle of the same 2005 vintage was featured in the 2021 release of No Time to Die, the final chapter of Daniel Craig’s performance as Bond. While Bollinger may officially be the favorite champagne of 007, Chateau Angelus is no doubt his favorite Bordeaux.

The Bell of Angelus

The iconic symbol of Chateau Angelus, widely recognized by fine wine lovers everywhere, is a bell prominently displayed on the label of the estate’s wines and as part of the chateau’s unique architecture. This symbol harks back to an ancient Saint-Emilion tradition, which originates from the monastic order of the 11th century and was developed in the 1400’s under Pope Callistus III. The bells of the three churches of Saint-Emilion would ring in the morning, midday and in the evening, serving as a call to prayer known as “the Angelus.” The men and women of the region would pause their work and participate in a shared moment of faith and devotion.

The sound of the bells tolling was particularly amplified out in the vineyards of Chateau Angelus, planted in a natural amphitheater facing the town. It is this moment of shared devotion, be it to one’s faith or to the land and its wines, that inspired both the name and logo of the estate. Today, the chateau is home to a beautiful bell tower with a set of bells that chime the national anthems of guests visiting the chateau.

An Organic Vineyard in Saint-Emilion

The vineyard of Chateau Angelus covers just over 100 acres of vines in the Saint-Emilion appellation, situated on the Right Bank of Bordeaux in France. Out of the 100 acres, 66 are classified Premier Grand Cru Classé A. The vineyard is planted with 50% Merlot, 47% Cabernet Franc and 3% Cabernet Sauvignon, making it the estate with one of the highest proportions of Cabernet Franc in its appellation. In fact, the de Boüard family has been one of the earliest proponents of maintaining this grape variety in Saint-Emilion and has, in preparation for the effects of climate change, been experimenting with massal selections of Cabernet Franc to find clones that produce less alcohol and have higher natural acidity.

The vines of Angelus are aged around 38 years on average. The Merlot vines are planted in mostly clay and limestone soils, with the best plots situated at the highest elevations with southern exposure. Meanwhile, the Cabernet Franc is rooted mostly in gravel, limestone and sand. The vineyards are planted at densities ranging from 6,500 to 8,000 vines per hectare, with newer plantings established at even higher densities.

In 2015, the de Bouard family decided to convert to organic viticulture, as a way to preserve the health of the vineyard ecosystem for generations to come. Today, the vineyards is home to several beehives to help with pollination and bushes are allowed to grow freely between vine rows. The vineyard team has eliminated to use of chemical fertilizers, herbicides and pesticides, relying instead of sexual confusion by means of pheromones to disrupt the activity of insect pests.

The Making of the Chateau’s Three Wines

Following a manual harvest with a very thorough selection process, the fruit is transported to the winery, where it is destemmed. For the 2009 vintage of the chateau’s namesake First Wine, part of the fruit was destemmed manually by 60 people - a remarkably a labor-intensive and costly process – meant to prevent oxidation and retain freshness in the grapes. The chateau was one of the first to invest in an optical sorting system to complement the sorting by hand. The fruit goes through a short cold maceration, followed by whole-berry fermentation in wood, stainless steel and concrete vats. The First Wine is aged in 100% new French oak barrels for a period between 18-24 months, with the exact time in barrel depending on the characteristics of the vintage.

The estate’s namesake Grand Vin is Chateau Angelus, a Premier Grand Cru Classé “A” of Saint-Emilion whose release of each vintage is a long awaited event each year. Blending around 60% Merlot with 40% Cabernet Franc (with exact proportions varying with each vintage), this St Emilion wine reveals intense aromas of juicy black fruit, notably wild cherries and blackberries, along with florals like peonies and violets on the nose. The palate offers beautiful tension along with very refined and velvety tannins. Cabernet Franc comes through particularly on the finish, lending the wine its characteristic spicy and menthol touches. Each new vintage of Chateau Angelus has its very own personality, summed up in one short expression by the property each year. 2020 was “sublime,” 2019 was “flamboyant,” 2018 was “the phoenix,” 2017 was “brilliant” etc. What these wines all have in common is their timeless elegance, and their expression of a family’s loyalty and devotion to their land.

The estate’s Second Wine is Carillon d’Angelus, first released in its 1987 vintage. Following in the footsteps in its big brother, this Saint-Emilion Grand Cru blends Merlot, Cabernet Franc and Cabernet Sauvignon in a wine made with great precision. It offers plush, pure fruit aromas, along with velvety smooth tannins and an elegant finish, pairing effortlessly with a wide range of dishes.

The Third Wine is N°3 d’Angelus, a Saint-Emilion wine made from plots across the appellation. This wine comprises around 85 to 90% Merlot, offering a pure expression of the Right Bank’s flagship grape. It is aged only in second and third-fill barrels. While Chateau Angelus and Carillon d’Angelus will take a number of years to evolve in the cellar, N°3 is approachable in its youth, ready to be enjoyed upon its release. This is an easy-going, no-fuss wine to enjoy while waiting for the two others to finish aging. Nevertheless, it can be kept for five to eight years in your cellar.