The Leflaive family has been a leader in Burgundy winemaking since 1717 and today is considered one of the top producers of white Burgundy. Claude Leflaive purchased two hectares of vineyards...Read More

The Leflaive family has been a leader in Burgundy winemaking since 1717 and today is considered one of the top producers of white Burgundy. Claude Leflaive purchased two hectares of vineyards in the early 1700s in Puligny-Montrachet, becoming one of the first vignerons on record in the area. Years later in the 1900s, Joseph Leflaive inherited those two hectares and expanded the family property creating Domaine Leflaive. Rather than continuing to sell the small amount of wine to local negociants, Joseph purchased exceptional parcels of land in the aftermath of the phylloxera epidemic and regrafted Chardonnay vines onto American rootstock.

Today, Domaine Leflaive extends over 40 hectares across Puligny-Montrachet, Macon-Verze and Solutre-Pouilly with five hectares of Grand Cru and 11 hectares of Premier Cru vineyards. Domaine Leflaive is also known as a pioneer in biodynamic farming in Burgundy. Back in the 1990’s Anne-Claude Leflaive became co-director of the domaine and immediately began investigating how to improve the vineyards. Through her research and dedication, Domaine Leflaive was converted completely to biodynamic farming by 1997 and the quality of the vines and soil improved greatly, thus creating exceptional terroir driven wines.

The Domaine Leflaive wines of Puligny-Montrachet are known for having a rich mineral backbone and rounded structure. The vineyards in this area are limestone rich with calcareous soils. The Leflaive wines of Macon Verze are also quite distinct with a lively fruity structure. The Chardonnay vines are matured and well established on a western facing slope for balanced and evenly ripened grapes. All Domaine Leflaive wines are distinctly unique and reflective of the extremely beautiful and diverse terroir of Burgundy.

With its impressive collection of Grand Cru and Premier Cru plots in some of Burgundy’s most famous appellations, Domaine Leflaive has enjoyed a spotless international reputation for many decades. Its Premier Cru “Les Pucelles” even competed in the historic Judgement of Paris in 1976, earning 8th place among some of the best white wines in the world. 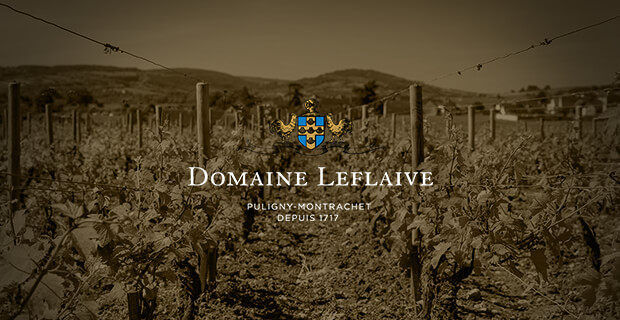 But it wasn’t until forward-thinking visionary Anne Clause Leflaive converted the entire property to biodynamic viticulture in 1997 that this Puligny-Montrachet estate really found its place, as one of the pioneers of the biodynamic movements in France. Today headed by Brice de la Morandiere, great-grandson of the founder, Domaine Leflaive produces some of the most spectacular and sought-after whites in the world: silky-smooth and voluptuous Chardonnay wines, renowned for their finesse, precision and purity.

While the history of the Leflaive family in Puligny-Montrachet dates back to the earthy 18th century, it was really Joseph Leflaive (1870-1953) who built the foundations of the Domaine Leflaive estate we know and love today. Joseph Leflaive began his career as a naval engineer and was even involved in the construction of the very first French submarine. After his marriage to Camille Bietrix du Villars, he made a change in his career and began looking after the family property.

In 1905, he began purchasing phylloxera-ravaged vineyards in Puligny-Montrachet. As these vines had recently been wiped out by the disease, land was cheap, but with tremendous work left to be done. Nevertheless, Leflaive believed in the great potential of these Burgundy terroirs. He set about replanting the vineyards and gradually expanding them with strategically purchased Premier Cru and Grand Cru plots. Domaine Leflaive became one of the first estates in Puligny-Montrachet to begin bottling at the estate, shifting the focus on a unique estate label rather than selling to négociants.

Following the death of Joseph Leflaive in 1953, the estate was left to his four children – Anne, Jeanne, Joseph (Jo) and Vincent. Joseph Leflaive took over the administrative and financial management of the property, while Vincent Leflaive managed the vineyard, wine production and commercialization. Together, the two brothers built up the international reputation of their family’s wines as some of the best of Burgundy. In 1976, the Domaine Leflaive Puligny-Montrachet Premier Cru “Les Pucelles” even competed in the historic Judgement of Paris and was chosen 8th out of the top 10 French and California wines.

In 1990, Vincent’s daughter Anne Claude Leflaive and Joseph’s son Olivier Leflaive were appointed as joint managers of Domaine Leflaive. The cousins co-managed the estate until Olivier Leflaive left the company in 1994 in order to run his own very successful négociant business. In that same year, Anne Claude Leflaive took over running the estate on her own. With the help of biodynamic consultant Francois Brochet, soil expert Claude Bourguignon and her right-hand-man Pierre Morey, Anne-Claude began experimenting with biodynamic viticulture. By 1997, Anne Claude had converted all the Leflaive vineyards to biodynamic farming, becoming a pioneer of the biodynamic movement in Burgundy.

Today, Domaine Leflaive is run by the 4th generation, represented by Brice de la Morandiere, the nephew of Anne-Claude and great-grandson of the founder. Under his management, several new projects have been undertaken at the Puligny-Montrachet estate, including the renovation of historical buildings with the aim to make them energy-efficient and sustainable. Recently, the family has also expanded its holdings with 3 additional hectares in Puligny and 7 hectares in the Maconnais. A new vineyard in the Hautes Cotes de Beaune has also been forecast for 2020.

The Biodynamic Vineyards of Domaine Leflaive

Since 1997, the vineyards of Domaine Leflaive have been cultivated biodynamically, in keeping with a lunar calendar and terrestrial rhythms. All chemical treatments of the soil have strictly been banned and replaced with biodynamic preparations made from wild herbs, such as yarrow, nettles and chamomile. These preparations help reinforce the vines’ immunity to disease, allowing the plants to defend themselves against pests naturally without harmful chemicals. Biodynamic fertilizer in the form of horns filled with cow manure help promote a natural biodiversity of beneficial microorganisms in the soil. All this leads to a healthier, more dynamic ecosystem in the vineyards, which results in a fuller expression of terroir in the glass.

In Puligny-Montrachet, the terroir is characterized by calcareous clay soils with a mix of clay and limestone that varies from one location to the next. Each Domaine Leflaive wine expresses its specific cru of origin through Chardonnay, the flagship white grape variety of Burgundy.

At Domaine Leflaive, a biodynamic approach out in the vineyards is coupled with a traditionally Burgundian, minimal-involvement vinification at the winery. After the retirement of Pierre Morey in 2008, Eric Remy took over winemaking operations of Domaine Leflaive. Following a strictly manual harvest, with grapes picked only when they are fully ripe, the fruit is brought to the winery, where it is sorted and very gently pressed. The fermentation process is quite long and is carried out naturally with exclusively indigenous yeasts. Between alcoholic fermentation and malolactic fermentation, the lees are stirred by a process known as batonnage.

For most of the Domaine Leflaive portfolio, the wines spend 12 months in cask, after which they are further aged for 6 months in tanks. Their Le Montrachet Grand Cru, however, is aged for 12 months in new oak, followed by 6 months in oak with one previous use. The barrels are stored in a very unique egg-shaped cellar, designed to offer ideal storage conditions and completed in 2014. The wines are fined by homeopathic methods and filtered lightly (and only if necessary) before bottling.

Domaine Leflaive specializes in the production of biodynamic Burgundy white wines made exclusively of Chardonnay. The estate is particularly well known for its Grand Cru wines and Premier Cru wines of the Puligny-Montrachet appellation, recognized as some of the best white wines of France and highly sought after around the world. Each of these wines offers a faithful expression of its unique terroir of origin, as well as its vintage.

Their Macon-Verze 2017, for example, reveals green orchard fruit, citrus and minty touches on the nose and fruity core on the palate, followed by a saline finish. The Domaine Leflaive Puligny-Montrachet Premier Cru Clavoillon in the same vintage offers more white florals and lemon on the nose, and an almost chewy palate. Meanwhile, their Meursault Premier Cru Sous le Dos d’Ane offers green apples and pears, along with touches of mint on the nose.

These wines all tend to have in common a medium to full body on the palate, a certain precision and elegance, as well as a smooth texture, tangy acidity and – the signature of the estate – a remarkable purity on the palate.