A prestigious appellation located in Piedmont, Italy, Barolo is the birthplace of exceptional wines. This appellation covers an area of 1,500 hectares spread over 11 municipalities, including...Read More

A prestigious appellation located in Piedmont, Italy, Barolo is the birthplace of exceptional wines. This appellation covers an area of 1,500 hectares spread over 11 municipalities, including the renowned Castiglione Falletto, Serralunga d'Alba, La Morra and Monforte d´Alba.

Classified a DOCG - the highest hierarchical level in the classification of Italian wines - the Barolo appellation is renowned for its powerful and complex red wines.

Barolo is made from the Nebbiolo grape, which takes its name from the morning fog truly emblematic of the Piedmont region. Barolo wines are truly excellent, distinguished by their very pale color, which evolves a garnet hue over time. The nose is complex, offering notes of ripe berries, cherry, tobacco, as well as the grape variety’s tell-tale aromas of red roses and tar. On the palate, Barolo wines are powerful, structured by very fine tannins and a lively acidity. Sometimes quite austere in their youth, Barolo wines are, by definition, wines with exceptional potential for age. 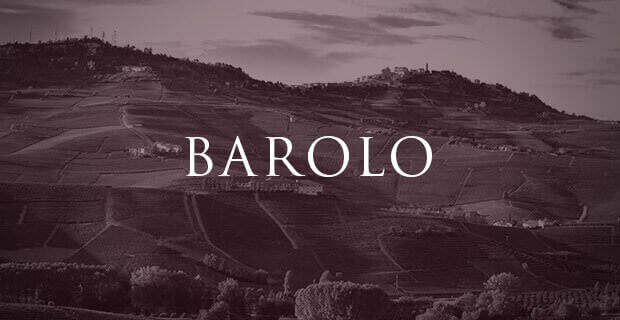 Hailing from the vineyard-draped, foggy hills of Langhe in the Piedmont region of northwestern Italy, Barolo is one of the most beloved of Italian wines, and one of the very first to earn the prestigious DOCG title. It is here that thin-skinned, late-ripening Nebbiolo finds its purest and most classic expression, producing remarkably long-lived and complex wines with an elevated acidity, firm tannic structure and telltale aromas of rose and tar. This combination of a bold palate and a delicate nose make Barolo wines the ideal pairing to wintertime comfort foods that are rich in texture but mild in flavor. Pair them with a hearty wild mushroom risotto or handmade tagliatelle al ragu on a cozy night in.

The History of Barolo: King of Wines and Wine of Kings

While Nebbiolo, the flagship grape variety of the Piedmont region in the northwestern corner of Italy, has been around since at least the 13th century, the history of modern-day Barolo is relatively short. Some wine historians believe that up until the 19th century, Barolo was actually a sweet wine. Nebbiolo is a famously late-ripening varietal, historically harvested in late October or early November, meaning that by November and December, temperatures in Piedmont would be cold enough to stop alcoholic fermentation, resulting in plenty of residual sugar remaining in the wine. It was a 19th century politician by the name of Camillo Benso, Count of Cavour who took the first stand in improving the quality of wines from Barolo. Having travelled to Bordeaux and Burgundy, he was inspired to improve the winemaking technique at his family’s estate in Grinzane and hired French winemaker Louis Oudart to help him do so.

Oudart made several changes both in the vineyards and cellar of the Count of Cavour. He limited grape yield to improve overall quality, cleaned the cellars, installed new equipment and – perhaps most importantly – heated the fermentation area to allow fermentation to proceed without stopping, producing a dry wine. Oudart is believed to have made the same changes in the cellars of the Marchesa di Barolo, whose wines caught the attention of King Carlo Alberto of Savoy and later King Victor Emmanuel. The latter enjoyed the wines so much, in fact, that they planted Barolo vineyards themselves, giving rise to the popular nickname “King of Wines, Wine of Kings.”

Another popular theory claims that it was not a French winemaker, but an Italian by the name of Paolo Francesco Staglieno who first produced the modern dry version of Barolo while working for the Count of Cavour between 1836 and 1841. His method, coined “the Staglieno method,” is believed to have already been widely in use by the time Oudart arrived to Italy. Whatever version is true, Barolo wine became dry in the mid-19th century and by the mid-20th century several large negociants (wine merchants) were purchasing grapes and wines from winegrowers across the zone to blend into their house style. In the 1960’s, several individual property owners began popping up and shifting the focus from vineyard blends to single-vineyard bottlings. The Barolo DOC was established in 1966 and upgraded to DOCG status in 1980.

In the 1970’s and 1980’s, the world wine market began showing a preference for fruitier, less tannic wines that were accessible at an earlier age, and to meet this demand a group of rebellious Barolo producers started producing a more modern, international style of Barolo. Producers like Elio Altare adopted certain techniques to “soften” the wines, including harvesting later to ensure more developed tannins, shorter periods of maceration and fermentation, the use of rotofermenters for a speedier extraction of color, a shorter maturation period in small new French oak barriques (rather than the traditional large Slavonian ask casks called botti) and a shorter period of bottle age before release. These producers, labelled “modernists” were scorned by traditionalist producers, determined to stick to tried-and-true methods. This rift between Barolo producers is known as the Barolo Wars.

In the last few decades, advances in viticulture and winemaking have helped bridge the gap between modernist and traditionalist Barolo producers, allowing for a “best of both worlds.” Improvements in canopy management, for example, has resulted in the harvest of riper grapes with more developed tannins at earlier dates. Temperature-controlled fermentation vessels have led to significant improvements in quality in both camps. And while many of today’s Barolo producers opt for some combination of traditional and modern techniques, some distinctions still remain: the modern approach continues to favor shorter maceration and cooler fermentation temperatures than the traditional approach, as well as aging in small new French oak barriques rather than large botti.

The Barolo Terroir: Heartland of Nebbiolo

Barolo is situated in the northwestern area of Piedmont of Italy, southwest of Barbaresco, in the fog-prone Langhe Hills. The Barolo DOCG appellation is made up of 11 different communes, of which the “Big Five” (Barolo, La Mora, Monforte d’Alba, Serralunga d’Alba and Castiglione Faletto) produce a grand majority of the wine, while the remaining six (Novello, Diano d’Alba, Verduno, Roddi, Grinzane Cavour and Cherasco, Roddi) supply the rest. Each of these villages has its own signature style of Barolo wine, with Cartiglione Falletto producing wines with powerful tannins, for example, while Monforte d’Alba producing a silkier, smoother style.

These differences depend largely on terroir, as the Barolo zone is home to a wide variety of mesoclimates, soil types, expositions and altitudes, all of which significantly influence how the Nebbiolo grape develops. For example, the Helvetian sand and limestone soils of the Serralunga Valley (home to Castiglione Falletto, Monforte d’Alba and Serralunga d’Alba) produce more intense wines with longer aging potential, the more calcareous marl soils in the Central Valley (home to Barolo and La Morra) produce wines that are typically softer and fruiter in profile. And even within the Central Valley there are differences between La Morra wines, which are more perfumed and graceful, and Barolo-commune Barolo, which tend to be more complex and broad in texture. Overall, the Barolo appellation enjoys a continental climate, with temperatures moderated by the Tanaro River and its tributaries.

Barolo is the heartland of Nebbiolo, a small, thin-skinned red grape variety naturally high in acid and tannins. While Nebbiolo is one of the first varieties in the Piedmontese wine regions to undergo bud-break in the spring, it is also one of the last to be picked (in late October or November), due to its very slow ripening. It is believed to get its name from “nebbia,” which in Italian refer to the fogs that drape the Langhe Hills in the autumn, slowing down even further the ripening of the grapes. The Denominazione di Origine Controllata e Grantita (DOCG) Barolo is the highest classification for Italian wines, and comes with several restrictions on the winemaking process. Barolo DOCG wines must be made from 100% Nebbiolo and aged for at least 38 months, of which 18 in oak. When a Barolo has been aged for five years or more, it may be labelled Riserva.

Barolo in the Glass, Barolo with Food

Barolo wines are full-bodied red wines, which tend to be high in natural acidity, with dense and firm tannins that evolve over decades in the bottle. Over time, its youthful ruby-red color evolves a beautiful rusty, brick-red tinge. On the nose, Barolo wines express the tell-tale aromas of Nebbiolo: its signature “rose and tar,” dry herbs and licorice, as well as red fruits (raspberry and cherry). Barolo wines from the best vintages can be aged for 30 years or more in the bottle, significantly improving with time in bottle. With age, these wines reveal earthy nuances of truffles, forest floor and dark chocolate.

Before serving a younger Barolo red wine (7 to 10 years old), it is advisable to decant it for around 4 hours. For an older Barolo red wines (25 years or more), it is best to open the bottle and let it sit for up to a day to allow the residue to sink to the bottom and then decant it by pouring the wine slowly and carefully into the decanter. Barolo should ideally be served at temperatures of 64°F to 68°F (18°C to 20°C).

As a wine naturally high in acid and tannin, Barolo is a fantastic tasting red wine to pair with food. Its powerful tannic structure and delicate floral aromas make it especially well-suited to dishes which are subtle in flavor but rich in texture, wintertime classics like wild mushroom risotto, homemade pasta with a rich, meaty ragu or roasted game. A bottle of Barolo is the perfect centerpiece for a big family dinner, but hits the spot equally well as a wine to open with your special someone on a cozy night in.