The story of Kosta Browne Winery began in 1997, when two friends - Dan Kosta and Michael Browne - decided to save some funds with which to finance an experiment in winemaking. The duo...Read More

The story of Kosta Browne Winery began in 1997, when two friends - Dan Kosta and Michael Browne - decided to save some funds with which to finance an experiment in winemaking. The duo initially purchased a half-ton of Pinot Noir grapes from the Russian River Valley, a used barrel and a hand-cranked de-stemmer. From that first barrel they produced 24 cases, selling it under the label KOSTA BROWNE. Over just a few years, the passionate novice winemakers gained a serious following. In 2001, Chris Costello joined them, helping seek out "founding investors" to finance the project. And the rest, as they say, is history.

The Kosta Browne Winery currently produces a stunning array of appellation and single-estate Pinot Noir wines from grapes sourced from the estate’s own vineyards and from family-run businesses in three celebrated Californian appellations – the Sonoma Coast, Russian River Valley and Santa Lucia Highlands.

Rather than repeating a consistent signature style, the wines of Kosta Browne Winery are produced in the way that best suits each batch of grapes, clearly expressing their vintage and terroir of origin. The portfolio offers wine lovers a mosaic of flavors and textures. 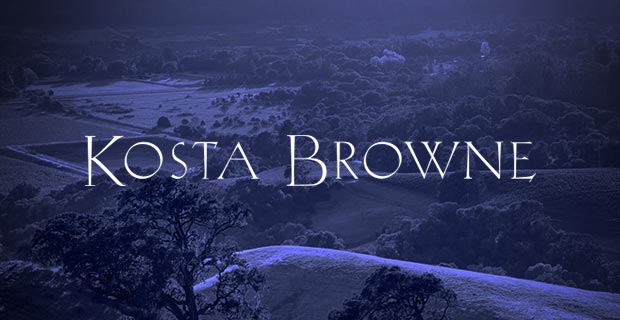 Founded in 1997 by Dan Kosta, Michael Browne and Chris Costello, the legendary Kosta Browne Winery produces some of the most sought-after Pinot Noir wines in California. The estate sources its grapes from the most celebrated terroirs of three prestigious appellations – the Sonoma Coast, Russian River Valley and Santa Lucia Highlands. In 2016, the company acquired the famed Cerise Vineyard on the steep and wild hills of Mendocino County. The Kosta Browne collection is a vast array of Pinot Noir, ranging from appellation wines that blend the best of these terroirs to single-vineyard masterpieces from family vineyards and the estate's own parcels.

Kosta Browne Winery: How it all began...

The story of Kosta Browne winery is one of those charming tales of success earned through hard work and passionate dedication. It all began in 1997, when two friends - Dan Kosta and Michael Browne - were working as General Manager and Sommelier, respectively, at John Ash & Co restaurant in Santa Rosa, California. Avid wine lovers with a special affinity for Pinot Noir, the two decided to put aside money with which to later fund their experiment in winemaking. With just $1,400 in the bank, the duo purchased a half-ton of Pinot Noir grapes from the Everett Ridge estate in the Russian River appellation, along with a used barrel and a hand-cranked de-stemmer/crusher. From that first barrel they made around 24 cases, which they served under the label KOSTA BROWNE to VIP guests at the restaurant. When there was no wine left, they found angel investors to finance their production of Sauvignon Blanc sourced from Lake County, of which they made 3,400 cases. In 2001, Chris Costello joined the team with the focus on seeking out "founding investors" to finance the project.

In 2005, the team received 95-point scores on their 2003 vintage Pinot Noir wines from Wine Spectator, along with three other scores above 90. From that time on, the reputation of their wines began to grow, as did the pool of collectors and investors who wanted to be part of the project. From early on, the wines of Kosta Browne caught the attention of Master Sommelier Fred Dam, who provided valuable feedback that helped the project grow.

While continuing to source Pinot Noir from some of the most talented producers of the Sonoma Coast, Russian River Valley and Santa Lucia Highlands appellations, the team also constructed a custom winery tailored to their winemaking philosophy, and began purchasing property to produce estate wines. In 2016, Kosta Browne added the Cerise Vineyard in Anderson Valley to their collection of own estates. These 26 blocks of Pinot Noir and Chardonnay represent the first property bought by the company outside Sonoma County.

Kosta Browne currently produces 3 appellation wines, which blend grapes from the best parcels of Sonoma Coast, Russian River Valley and Santa Lucia Highlands. They also produce several single-vineyard wines from purchased grapes or estate grapes, each of which expresses the unique character of a specific vineyard.

The Sonoma Coast appellation follows the shape of the Pacific Ocean and is home to the estate's Gap's Vineyard, purchased in 2006. The vines enjoy a coastal influence, with a late season fog cooling the temperatures and allowing the fruit to ripen more slowly, resulting in more balance in the finished wine. From this area, the team also sources fruit from the Kanzler family whose vineyard stays cool towards the end of the summer, allowing for very complex, later-ripening Pinot Noir.  Kosta Browne's 2009 Sonoma Coast Pinot Noir was chosen by Wine Spectator as the #1 Wine of the Year in 2011.

The Russian River Valley appellation is also characterized by the cooling effects from a Pacific Coast fog, which slows down the ripening process and allows the flavors of the fruit to evolve more gradually. Kosta Browne purchased the Keefer vineyard in the southwestern corner of the appellation in 2005. The vines grow in classic Goldridge soils on gently rolling hills, refreshed by cool fogs and breezes, and they produce wines with wonderful natural acidity and elegance. Grapes have been sourced from the slightly warmer Giusti family estate since 2004 and from the historical Cohn vineyards since 2000. Since 2001, Kosta Browne has been the only producer making Pinot Noir from the Koplen property in the middle of the appellation.

Santa Lucia Highlands is a relatively new appellation located on the eastern slopes of the coastal range. The climate here is kept cool because of the ocean breezes that flood inland from Monterey Bay. Kosta Browne sources Pinot Noir from the Arrayo Seco Sandy Loam soils of Rosella's vineyard (owned by Gary Franscioni), the decomposed granite soils of the Pisoni vineyard (owned by Gary Pisoni) and the 50-acre Gary's vineyard (co-owned by the two aforementioned Gary's).

In the north, the Anderson Valley appellation is home to vineyards planted on steep hillsides in rocky soils. It is here that Kosta Browne purchased the Cerise Vineyard, including 60 acres planted at elevations from 700 to 1,700 ft in a wild, rocky terrain.

For example, while the 2015 Sonoma Coast appellation wine was vinified with 2% whole cluster fermentation and aged in 36% new French oak, 15% in wooden tanks and 1% in concrete, the relatively dry 2016 vintage of the same wine was made with 6% whole cluster fermentation, and aged in 16% concrete tank, 44% new French oak and 2% wooden tank. Rather than producing a signature style that stays consistent throughout the portfolio, the wines of Kosta Browne present a complex mosaic of flavors and textures.  Through the wonderfully versatile Pinot Noir varietal, each wine expresses a single vintage in a single terroir.