Margaux is undoubtedly one of the most prestigious appellations of the Bordeaux wine region. With its designation of origin controlled since 1954, Margaux covers almost 1,500 hectares, making...Read More

Margaux is undoubtedly one of the most prestigious appellations of the Bordeaux wine region. With its designation of origin controlled since 1954, Margaux covers almost 1,500 hectares, making it the largest of the 6 municipal appellations of the Médoc region. Margaux also boasts the largest number of Grand Crus Classés (Classified Growths) of 1855 (21 estates in total) than any other Medoc appellation. The vineyards of Margaux face the Garonne and the vines are planted in a very particular soil, featuring 6 levels of gravel, truly unique in the Médoc. Margaux red wine get their signature aromas and flavors from these soils, made up of gravel and pebbles in a clay-sandy complex.

Margaux red wines are made mostly of Cabernet Sauvignon and Merlot. The flagship grape variety of Bordeaux’s Left Bank, Cabernet Sauvignon lends structure, power and beautiful aromas of black fruit to the blend. However, Margaux is the Médoc appellation with the largest amount of Merlot planted. Merlot adds a unique charm and smooth texture to Margaux blends. Margaux red wine can also contain small quantities of Cabernet Franc and Petit Verdot.

Generous, elegant, complex, powerful, very aromatic and offering a kind of “silent force”, Margaux wines also boast a remarkable potential for age. Truly some of the greatest wines of Bordeaux.

The red wines of Margaux will delight Bordeaux-lovers who favor a sort of “quiet force” over the outright power of a big, bold Pauillac. These wines, born from the poor gravel soils so emblematic of the appellation, offer a certain delicacy, elegance and finesse in the glass, with a nose that interweaves fresh blackcurrants with the fragrant floral touch of violet. 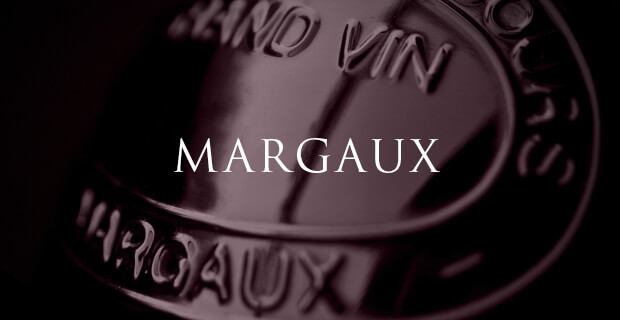 Boasting more Classified Growth estates than any other appellation on Bordeaux’s Left Bank, Margaux has become known for the signature style of its Cabernet-dominant blends, highly sought-after and emulated by wine producers far and wide.

The History of the Margaux Appellation

The winemaking history of today’s Margaux appellation expands back almost 2,000 years to the time of the Roman Empire. And while this area has always been home to a few vineyards, it was truly only in the 17th century that the Margaux landscape became so ideal for the production of fine wines. That is because before the 17th century most of the Medoc (a coteaux peninsula wedged between the Atlantic Ocean and the Gironde estuary, home to Margaux) was covered in salt marshes and swamps, better suited for grazing animals than viticulture.

As long-time consumers of Bordeaux wines, it was the Dutch who decided to drain these marshes and swamplands in the second half of the 17th century. This feat of engineering had two important consequences: improving the transportation of Medoc wines throughout and out of the region, and significantly increasing the area suited for wine growing. In the century that followed, several new chateaux began popping up all throughout today’s Margaux region and by the early 19th century, they were producing what was considered some of the best tasting wines of Bordeaux.

The Margaux appellation was officially created on August 10th, 1954 and strict regulations set by the appellation d’origine controlee (AOC). Since then, the chateaux of Margaux have experienced a spectacular revolution in quality, led by more precise approach out in the vineyards and immense technological improvements in the winery. Margaux wines are today considered some of the best of Bordeaux, setting the international standard for elegant, complex Cabernet produced from poor gravel soils.

The Margaux Terroir: Cradle of Cabernet

The Margaux appellation spans roughly 3,700 acres (1,500 hectares) of vineyards and is the largest and southernmost appellation in the Haut-Medoc section of the Medoc region, on the Left Bank of Bordeaux in France. The appellation, roughly 15 miles (25 kilometers) from the city of Bordeaux, is home to 5 villages in total: the most prestigious village of Margaux, as well as Soussans, Arsac, Labarde and Margaux-Cantenac. Each of these villages heads its own commune.

Soussans bordering Pauillac in the north is home to no cru classe wines, while the commune of Margaux, south of Soussans, includes ten classified growths. Among these are the most famous chateau of the appellation, the eponymous Chateau Margaux and Chateau Palmer, producing one of the most sought-after wines of today. Further south, Margaux-Cantenac boasts seven classified wines, including Third Growths Chateau d’Issan and Chateau Kirwan. Even futher south, Labarde is home to Chateau Dauzac and Chateau Giscours, while the southernmost commune of Arsac is where you will find famous Fifth Growth Chateau du Tertre.

To the east of the appellation, the dense Landes pine forest shields each vineyard from winds from the Atlantic Ocean. The Gironde estuary nearby moderates the temperature, resulting in mild winters and sunny and dry (but not too dry) summers.

But what sets the terroir of the Margaux appellation apart is the signature soil. Here the gravel content of the soil is overall higher than anywhere else in the Medoc, whereas Pauillac and Saint-Estephe vineyards are characterized by more clay. The thickness of this gravel topsoil varies across the appellation, as does the content of the subsoil, which can include limestone, clay and silt. The loose, nutritionally quite poor and very well-draining gravel topsoil provides the ideal environment for the cultivation of Cabernet Sauvignon, the flagship varietal of the Margaux appellation. The poorer the soil, the deeper the vines must stretch their roots to find water and nutrients.

And the deeper they stretch, the more contact they have with the subsoil, whose wide range of different characteristics are consequentially reflected in the grapes and the finished wine. This results in the great complexity and elegance characteristic of Margaux wines.

Apart from Cabernet Sauvignon, the Margaux appellation also permits Cabernet Franc, Merlot, Carmenere, Petit Verdot and Malbec, which are often included in the final blend. The vines must be planted at a density of 2,631 to 4,048 vines per acre (or 6,500 to 10,000 vines per hectare) and yields are limited to roughly 45 hectoliters per hectare. Unlike the rest of the Medoc appellations where the vineyards of each estate are clearly divided and usually arranged into single blocks, in Margaux the vineyards of different estates are often quite dispersed and mixed up with one another. This explains the greater emphasis on grape varietal and winemaking over specific micro-terroir of origin in the Margaux appellation.

How to Enjoy the Wines of Margaux

Margaux wines are characterized by a very deep, bright garnet-red color in the glass, with purple highlights in its youth which mellows out to an orange-red with age. The classic aromas of Margaux wines include rich black fruit (notably blackcurrants), as well as floral aromas (dried violet petals). Often described as the most “feminine” wines of the Medoc region, they show a beautiful elegance, great balance and considerable body on the palate, with tannins that are quite delicate and finely grained.

The “quiet force” and elegance of Margaux wines make them fantastic natural food pairings with a wide range of dishes, the most classic of which is roast lamb. They will also further elevate gourmet dishes made with most braised, roasted or grilled meats, including veal, pork, duck or squab, especially when prepared with earthy ingredients such as mushrooms or truffles. To fully appreciate a Margaux wine, we suggest decanting it for at least one hour before consuming it and serving it at 60°F (16°C).