With origins dating back to the 17th century, the Drappier family is one of the great names in Champagne. It was Saint-Bernard, founder of the Abbey of Clairvaux, who first commissioned the...Read More

With origins dating back to the 17th century, the Drappier family is one of the great names in Champagne. It was Saint-Bernard, founder of the Abbey of Clairvaux, who first commissioned the construction of the cellars in 1152. Still the pride of the estate, these vaulted Cistercian cellars now house the greatest vintages and bottles of Champagne Drappier.

But the story of Drappier Champagne really begins in 1808, when the family estate was created. It is now run by Michel Drappier. The family manages a vast vineyard in Urville, a third of which is cultivated by organic farming.

The DNA of Drappier Champagne is defined by Pinot noir, a noble variety cultivated by the family alongside other forgotten grape varieties: Arbane, Petit Meslier and Blanc Vrai.

The family aims, year after year, to produce a wine that authentically expresses the many facets of the terroir. The signature Champagne Drappier is characterized by a very low dosage and minimal use of sulfur.

In addition to a unique style, the Champagne House Drappier is the only one to do a “prise de mousse” or secondary fermentation in all of its bottle formats, from the half-bottles to the rare primats (27 liters) and melchisedech bottles (30 liters), riddling and disgorging individually in the original bottles. This respect for tradition serves as a guarantee of exceptional wine, with outstanding freshness and finesse.

Discover our wide selection of sought-after references from this producer, like the Champagne Drappier Carte d'Or, also known as the Drappier Champagne Brut.

Champagne Drappier is one of the finest, most unique Champagne houses that has been producing this effervescent luxury product for over eight generations. Located in Aube, the family has been an influential leader in Champagne in terms of introducing Pinot Noir to the area and reducing sulfur levels in their wines. They also have some of the oldest and largest cellars in all of Europe. Let’s take a look at how Champagne Drappier became one of the top producers in the world. 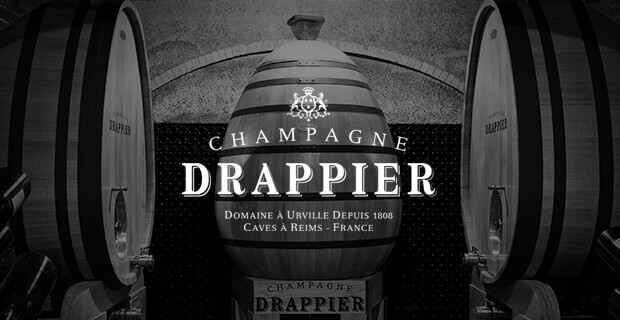 Drappier: From Clothing Merchant to Winegrowers

Champagne Drappier had its beginnings way back in the 17th century with Remy Drappier born in 1604 who became a clothing merchant in Reims. However, it wasn’t until 1808 when his ancestors made the move to Urville and established the current-day vineyards. The vineyards cover an area of 55 hectares, but Champagne Drappier also has partnerships with other winegrowers in Côte des Bar, the Montagne de Reims and the Côte des Blancs.

Over the years, there have been many transformations in the vineyards to make Champagne Drappier what it is today. In the early 1930s, George Collot, the grandfather of Michel who leads the House today, decided to grow Pinot Noir, which now covers 70% of the family vineyards. The 1957 frost that ravaged the vineyards led to the decision to also grow Pinot Meunier, a variety that can put up a fight against Champagne’s cold weather in the spring. Rare varieties like Petit Meslier, Blanc Vrai and Arbane are also dotted throughout the vineyards, all of which have contributed to Champagne Drappier’s uniqueness. Michel Drappier has been in charge of the House and its winemaking since 1979, and his three children Charline, Hugo and Antoine help with the running of the House, now in its eighth generation. Their two limestone cellars have a lengthy history as well. The oldest ones were built in 1152. The Drappier family later purchased them and started using them after World War II. These cellars in and around Urville are specifically used to store many of their fine vintages and their large-sized bottles. The other cellars in Reims are used to age the House’s exceptional cuvees like the Grande Sendree and the Millesime Exception.

Drappier: The Natural Approach to Vinification

The vines grow in an extremely rich limestone terroir. Once the grapes are harvested, Champagne Drappier takes the utmost care to produce the most elegant, aromatic wines as naturally as possible. After the grapes arrive at the winery, mechanical low-pressure presses are used to extract the juice. The juice is then handled with great care to avoid oxidation and so the use of gravity is used to avoid pumping. The juice is then settled naturally before it goes through its first fermentation for about two weeks at a low temperature. Malolactic fermentation then follows, which takes place naturally. The entire Drappier family then comes together to complete one of the most important processes, blending their unique cuvees. Champagne Drappier has been one of the biggest champions against the excessive use of sulfur, so prior to bottling, they use the weakest doses. As a result, their wines have more natural colors and more expressive aromas. Interestingly, the liqueur d’expédition that tops up the cuvees is aged in oak casks and then in demijohns for more than ten years. This type of ageing contributes to the concentration and complexity of the wines. Once bottled, the cuvees head into the cool, dark, limestone cellars for at least 30 months of ageing.

Champagne Drappier produces some of the world’s most exceptional Champagnes. Their flagship product can’t be missed with its distinctive yellow label, the Drappier Carte d’Or cuvée. It was first launched in 1952, and is 75% Pinot Noir, 15% Chardonnay, 10% Meunier.

Another exceptional cuvée is the Drappier Brut Rosé produced using the saignée method and made with 100% Pinot Noir. It was introduced in 1968 in a clear glass bottle, and its success has made its way to the Elysée Palace. Other rosé blends include the Grande Sendrée Rosé 2006 and the Grande Sendrée Rosé 2008 that have Pinot Noir as the dominant variety with a touch of Chardonnay.

Of course, the portfolio is not complete with the Drappier Blancs de Blancs, which is 100% Chardonnay. We also have to mention the Drappier Charles de Gaulle named for one of the House’s most famous clients, which consists of a Pinot Noir and Chardonnay blend. Former President de Gaulle chose Champagne Drappier for his private receptions in Colombey-les-Deux-Églises just outside of Urville, where he lived when he wasn’t at the Elysée Palace. Finally, we definitely can’t forget one of the most unique wines with some rare varieties, the Drappier Quattuor Blanc de Quatre Blancs, which is a blend of 25% Arbanne, 25% Petit Meslier, 25% Blanc Vrai and 25% Chardonnay.

From clothing merchants to renowned winemakers, Champagne Drappier has come to be known as one of the finest Champagne houses in the world with a commitment to a winemaking process as natural as possible that produces exceptionally refined wines for any occasion.