One fateful day back in 1985, the life of a Tuscan farmer by the name of Giuseppe Bianchini changed forever. When his longtime employer, the Countess Elda Ciacci unexpectedly passed away,...Read More

One fateful day back in 1985, the life of a Tuscan farmer by the name of Giuseppe Bianchini changed forever. When his longtime employer, the Countess Elda Ciacci unexpectedly passed away, leaving behind no heir, she bequeathed her entire estate – all 543 acres of it – to Bianchini and his family. With the help of his children, Paolo and Lucia, Giacomo set about making his dream a reality, transforming the historic property and its majestic palazzo into a leading wine estate producing world-class expressions of Sangiovese.

Today, Paolo and Lucia Bianchini run the picture-perfect Ciacci Piccolomini d’Aragona estate, on which they were born and raised, producing some of the most sought-after red wines of Tuscany.

The Rosso and Brunello di Montalcino "Annata" wines of Ciacci Piccolomini d’Aragona are known for their intense bouquet of ripe fruit, florals and spice, as well as their warm and soft presence on the palate. Meanwhile, the estate's 100% Syrah bottling Sant'Antimo DOC "Fabius" was once referred to by Robert Parker as the best Italian Syrah he had ever tasted. Take a moment to discover these fantastic cuvées, or the Sant'Antimo DOC "Ateo" blend of Cabernet Sauvignon and Merlot, the perfect Tuscan reds to pair with a hearty stew of hare or wild boar. 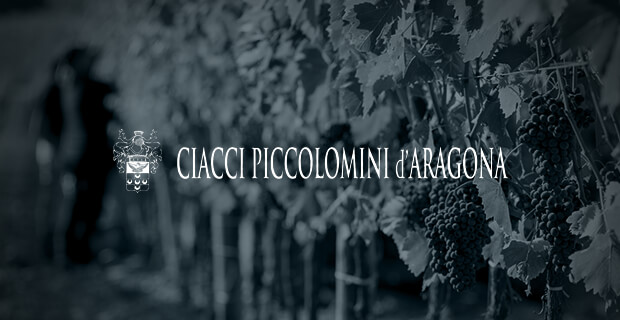 The Story of Ciacci Piccolomini d’Aragona

The story of the Ciacci Piccolomini d’Aragona estate is one of the most unique in the world of wine, truly like something out of a classic Italian film. The origin of the property dates back to the 17th century, when it was owned by Fabius de’ Vecchis, Bishop of Montalcino and Abbot of the Sant’Antimo Abbey. The bishop constructed the palazzo (palace) that then served as his residence and can still be found on the property today. Following the death of the bishop, the estate was put up for auction and purchased in 1868 by the countess Eva Bernini Cerratani, who later sold it to the Ciacci family of Castelnuovo dell’Abate in 1877. When Elda Ciacci married the count Alberto Piccolomini d’Aragona, known to be a direct descendant of Pope Pius II, the estate was renamed the Palace of Ciacci Piccolomini d’Aragona.

At this time, the classic Tuscan estate measured 220 hectares (543 acres) and was home to a farm, used to grow food for the family, as well as olive trees and vines to produce small amounts of oil and wine for local use. The countess entrusted the day-to-day operations of the estate to a farmer by the name of Giuseppe Bianchini, who worked tirelessly to maintain it. Bianchini had expressed an interest in growing more vines to produce high-quality wines for commercial use, but he could not convince the countess to do so.

On one sad day in 1985 Countess Elda Ciacci passed away and as she had no heir, Bianchini prepared himself to leave the estate on which he had spent his entire life working to find employment elsewhere. But in an unexpected turn of events, his entire life changed when he learned that, in fact, the countess had left the entire property – all 220 hectares of it – to him and his family as a gift. Truly a dream come true, Bianchini dedicated himself fully to converting the estate into one of the top wine producers in the Motalcino area, aided by his children Paolo and Lucia Bianchini, who had been born and spent their whole lives at the estate. The family began farming the highest quality plots of the property, producing classic Brunello wines, and opened several international markets for export.

Unfortunately, Giuseppe Bianchini passed away in 2004, leaving the estate to Paolo and Lucia. Today the brother and sister team continue to farm the estate, relying on organic viticultural techniques, as well as a state-of-the-art winery and new cellar established on the property. Paolo’s children Alex and Ester Bianchini have also recently joined the family business working in wine production and public relations, respectively. Since the 1990 vintage of their Brunello di Montalcino, the Ciacci Piccolomini d’Aragon has become known for their Tuscan wines of excellent quality, producing some of the most sought-after bottlings in the country.

Out in the Vineyards of Ciacci Piccolomini d’Aragona

The Ciacci Piccolomini d’Aragona estate is situated on a southeast slope in the municipality of Montalcino of the Tuscany wine region in central Italy. The estate spans 220 hectares (543 acres) in total, of which roughly 55.5 hectares (136 acres) are under vine and another 40 hectares (99 acres) planted to olive trees. This setting is the classic rustic landscape of Tuscany: rolling hills, forests, sun-soaked pastures and quaint farmhouses with Mount Amiata providing a magnificent backdrop to the vines.

The estate is home to several different vineyards, most of which are planted with Sangiovese in a medium-grained, well-drained, rocky soils, made of marl and shale from the Eocene period. The climate here is moderated by the proximity of the vines to Mount Amiata, which shelters them, and the Orcia River. This, in turn, results in a longer growing season, allowing the fruit to ripen slowly and gradually.

The vineyards are farmed organically without the use of harmful chemicals, pesticides or herbicides, and planted with cover crops between the vine rows. In fact, a nearby cow farm provides manure for organic fertilizer. The vines are worked manually and the yields kept low to concentrate the flavors of the fruit.

One of the most highly prized vineyards of the estate is Pianrosso, which covers 11.7 hectares (29 acres) of southeast-facing Sangiovese vines between 240 and 360 meters above sea level. From this ancient vineyard, the family produces their Brunello di Montalcino DOCG “Pianrosso,” as well as their Brunello di Montalcino DOCG Riserva “Vigna di Pianrosso” Santa Caterina d’Oro bottlings. The flagship cuvées of the estate, these wines offer an iconic expression of the noble Sangiovese varietal and the fabled Tuscan terroir. The “Fonte” vineyard is home to fruit used in their Rosso di Montalcino.

In the southern area of the estate, where the Orcia River creates a much milder microclimate, the team at Ciacci Piccolomini d’Aragona also grows Syrah, Merlot and Cabernet Sauvignon. From these international varieties, the team produces some non-traditional wines that are quite exciting as well, including a blend of Cabernet Sauvignon and Merlot named “Ateo” (or “atheist,” in reference to it going against the restrictive laws of Tuscany), as well as a 100% Syrah by the name of “Fabius,” which Parker once referred to as “the finest Italian Syrah” he had ever tasted.

The winemaking takes place near the village of Castelnuovo dell’Abate at the completely underground Molinello winery, which is over 2,500 square meters large. This building was designed and built by Giuseppe Bianchini and finished in the late 90’s. Today it serves as the Ciacci Piccolomini d’Aragona headquarters, as well as serving as the birthplace of the estate’s wines.

Alcoholic fermentation takes place in temperature-controlled stainless steel and glass-lined concrete vats. The wines are then transferred to an aging cellar, where they spend 24 to 36 months in Slavonian oak casks (which vary in volume from 7.5 to 75 hectoliters). It is during these months, that the Brunello and Rosso di Montalcino wines of the estate develop their signature elegance and complex flavors.

The 17th century Palazzo built by Fabius de’ Vecchis, Bishop of Montalcino still stands today and is home to an underground cellar which is used to age some of the most prestigious wines of the estate. It is here that some of the oldest vintages of Ciacci Piccolomini d’Aragona are stored, in what is truly the ancient heart of the estate.

The Sought After Brunello Wines of Ciacci Piccolomini d’Aragona

Today Ciacci Piccolomini d’Aragona produces some of the most sought-after red wines of Italy. The estate is best known for its classic wines made of Tuscany’s flagship Sangiovese grape. Their classic Brunello di Montalcino DOCG spends 24 months in Slavonian oak barrels of 20-75 hectoliters, followed by at least 8 months in bottle. This wine reveals a very intense and fruit-forward bouquet, enhanced by spicy and floral touches. On the palate, this Brunello is soft and warm, allowing it to pair beautifully with ripe cheeses and tagliatelle al ragu.

Ciacci Piccolomini d’Aragona also produces a Rosso di Montalcino from 100% Sangiovese, which presents more red berry fruit on the nose and soft, round tannins on the palate. Meanwhile their IGT Toscana Rosso blends Sangiovese, Syrah, Merlot and Cabernet Sauvignon in a wine that is very approachable and easy to drink, pairing perfectly with all kind of meats and cheeses.

Besides their Sangiovese-based wines, Ciacci Piccolomini d’Aragona also produces some wines from international red varieties. These include their famous Sant’Antimo DOC “Fabius” made of 100% Syrah and offering an intense, complex and very persistent bouquet full of blueberries, cherries, plums and spicy touches. This wine will go beautifully with stewed meat dishes, like wild hare or boar. Meanwhile, their Sant-Antimo DOC “Ateo” blends Cabernet Sauvignon and Merlot in a wine that offers more vibrant herbal touches, as well as pronounced yet balanced tannins. Pair this wine with roasted pork of lamb dishes.