Internationally known for its sophistication and complexity, Sauternes occupies a special place in the world of sweet wines, symbolized perfectly by the prestigious Chateau d'Yquem. Along with...Read More

Internationally known for its sophistication and complexity, Sauternes occupies a special place in the world of sweet wines, symbolized perfectly by the prestigious Chateau d'Yquem. Along with a signature, inimitable wine style, Sauternes is also the name of a historical appellation. Located on the Left Bank of the Garonne River in the Bordeaux region of France, around thirty kilometers south of Bordeaux city, the Sauternes wine production area covers a total of 1,557 hectares, extending over 5 communes: Sauternes, Bommes, Fargues, Preignac and Barsac. The vineyards of Sauternes are planted in a stony soil, composed of gravel and pebbles on limestone with bits of clay.

Sauternes wine owes its very particular flavor to the famous "noble rot", botrytis cinerea, a fungus without which this style would simply not exist. A unique microclimate is formed in this area by the Ciron River (a small tributary of the Garonne). The morning mists of autumn brings moisture, which is deposited on the surface of the berries, allowing for the development of this noble rot. The botrytis dries out the berries by concentrating the sugars inside (221g/L, according to the specifications of the appellation) and helping the wine express its flavors fully. A kind of liquid gold, Sauternes wines are the result of a process that is long and expensive for producers, since the specifications of the appellation limit the yield per hectare to just 25hl. At the most selective estates, one vine is equivalent to a glass of wine, instead of a bottle as in the case for most wines.

The famous classification of 1855, specially created for the Universal Exhibition of Paris, designated 26 classified growths, each with its own character. Although Semillon is the flagship grape variety of the Sauternes appellation, the blend also includes Sauvignon Blanc and Muscadelle.

Characterized by a beautiful aromatic freshness and citrus notes in their youth, Sauternes wines have a great ability to age, allowing them to fully express their complexity with a beautiful opulence on the palate, and a characteristic acidity.

Often associated with festive meals, Sauternes lends itself wonderfully to the most surprising food-wine pairings, especially with fusion cuisines and spicy dishes.

Sauternes | The Sweeter Side of Bordeaux 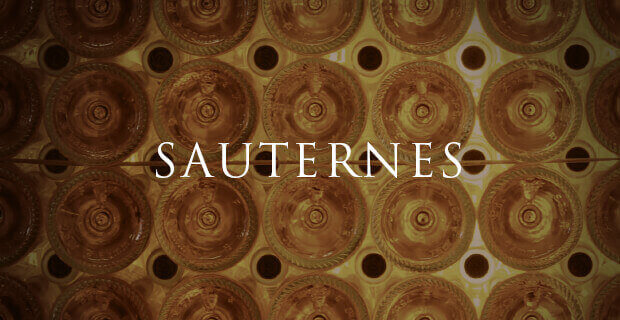 There's no better way to impress your friends and family at the end of a special meal than with a beautiful bottle of golden Sauternes from one of the best vintages of the region. This world-famous sweet wine made from botrytized grapes will go beautifully with just about any dessert food, as well as a wide range of cheeses (think, blue). And, what's left over (if any) can be enjoyed the next day as a Sauternes cocktail, with an ice cube and a touch of citrus zest, a new way of drinking Sauternes that has recently gained popularity. In this article we will discuss this unique wine's capacity for aging and how to choose the right bottle for your special occasion.

A Quick Glance at Sauternes

In a land of bold, powerful tannic reds, the wines of Sauternes and Barsac stand out for their unique style - the softer, sweeter side of Bordeaux wine. This wine is distinguished by a unique viticultural technique, which allows the grapes to be infected with a "noble rot," leading to the "raisining" of the fruit. This, in turn, leads to more residual sugar and a great complexity that shines through in the finished product. With sugar levels between 120-220 grams per liter, Sauternes qualifies as a very sweet wine, pairing beautifully with some of the region's most classic dishes, including a variety of pungent cheeses and, of course, foie gras. The region of Sauternes comprises five communes, namely Barsac, Sauternes, Bommes, Fargues and Preignac. Here, the cool waters of the Ciron River flow into the warmer stream of the Garonne. In the summer months this mix of temperatures creates a fog that descends onto the surrounding land, promoting the growth of Botrytis cinerea, the fungus to which Sauternes owes its style.

To qualify as a Sauternes, a wine from one of these communes must have at minimum 13% alcohol. While all five of these regions are allowed to label their sweet wines "Sauternes," producers in Barsac can also choose the Barsac appellation to display on their wines, which tend to be slightly drier and lighter in body than other Sauternes wines. The wines of Sauternes are made from a blend of three permitted white grape varietals. Semillon is the workhorse of the bunch, attracting the most noble rot with its thin skins and adding a rich texture to the wine. Sauvignon Blanc brings the acidity, lacking in Semillon, while Muscadelle enhances the blend with its floral characteristics.

The sweet white wine of the Sauternes region is considered some of the most age-worthy in the world, often still drinkable after several decades. What makes them so resistant to the passing of time? As many of the grapes used to produce Sauternes are affected by botrytis, the acidity and sugar in the grapes become more concentrated. This helps stabilize the wine and protect it from oxidation, giving the fermentation process plenty to "work with" in terms of raw ingredients. Although a good Sauternes is good even when consumed at its youth, this wine drinks at its best after it matures and sheds some of its baby fat. Over time, the hallmark golden hue of the wine grows deeper, gradually transforming into a copper color. As this happens, the rich and very sweet flavors of honeydew and tropical fruit give way to caramel, spices and deeper nutty notes, a signature of the Semillon grape.

Although the wines of Sauternes are built to age, they are enjoyable also in their youth - unlike many of the Premier crus of surrounding Bordeaux appellations. One fantastic way to enjoy a newer vintage of Sauternes is on the rocks, as suggested by 1er Grand Cru Classe estate Chateau Lafaurie-Peyraguey. This prestigious chateau has recently started promoting this brand new experience with its award winning wine: Sauternes served with 3 ice cubes and lemon or orange peel with the rim of the glass rubbed with the same.

At this point (we hope) you may be considering choosing a Sauternes with which to grace your dinner table. Good. But which vintage should you buy? And if you already have a collection of Bordeaux's sweet dessert wines, which vintages are best left to keep aging? The truth is that, as stated above, a good Sauternes is good even in its youth. But if it's the more mature, caramelized, nutty complexity that you're after, we suggest investing in an old vintage. Although some years were just generally very good or very bad for Bordeaux across the board, Sauternes "best vintage list" does not exactly match that of the rest of Bordeaux. This is due in large part to the unique climate in Sauternes, which is so different from its neighbors, producing dry reds, and dry white wines. For example, although 2017 will be remembered for the difficult April frost in most Bordeaux appellations, the signature fog of Sauternes actually protected many of the vines, resulting in less loss.

In terms of the pre-phylloxera era, 1847, 1848, 1858, 1864, 1865, 1874, 1875 and 1878 stand out as the best vintages. The first still-surviving vintage of the 1900's is 1921, which stood out as one of the best in the history of the region. After that, the 1929, 1937 and 1945 vintages were also quite impressive. The 1945 vintage was generally a famously superb year all around Bordeaux and France. The best post-war vintages begin with 1947, 1955 and 1959, the latter of which produced incredibly concentrated wines because of the very heavy botrytis experienced that year. Sauternes from 1983 were some of the best - intense, complex and very rich in flavor. Then came two fantastic vintages in a row - the 1989 and the 1990 - the former producing wines with beautiful structure while the latter stood out in its harmony, richness and elegance.

The best vintage of the new millennium so far is 2001. In this year, heavy rainfall spoiled many of the reds of the region but encouraged heavy botrytis. The result is a magnificent vintage for wine production, with remarkable aging potential. We recommend keeping these at least another decade or two. Further good vintages followed, with the 2003, 2009 and the 2011, the latter of which was marked by a rapid arrival and quick spread of botrytis throughout the region. The 2015 vintage, already very famous in the rest of Bordeaux, also shows great potential.