One of the oldest estates in the Medoc, Chateau Citran can trace its history over 600 years, to the 15th century. Today, the estate is owned by the Merlaut Family, who also own Chateau...Read More

One of the oldest estates in the Medoc, Chateau Citran can trace its history over 600 years, to the 15th century. Today, the estate is owned by the Merlaut Family, who also own Chateau Chasse-Spleen, and its 90 hectares of vineyards are planted with 58% Cabernet Sauvignon and 42% Merlot. Investment in the modernisation of the chateau's viticultural methods and vilification techniques have resulted in a wine that is seductive. Expressing a harmonious balance between fruit and oak, it is made wild by its spicy character and is supported by a structure of elegance and complexity.

Home to a fairytale chateau and meticulously manicured grounds surrounded by a moat, Chateau Citran is one of the most picturesque properties on the banks of the Garonne. Its history can be traced back to the 13th century, when the estate served as a seigneury and fortress belonging to the Marquis de Donissan, whose family remained at the helm for over six centuries. Today, the historic chateau is owned by the Merlaut family of Bordeaux wine specialists, who have elevated the chateau’s wines to the height of their potential. 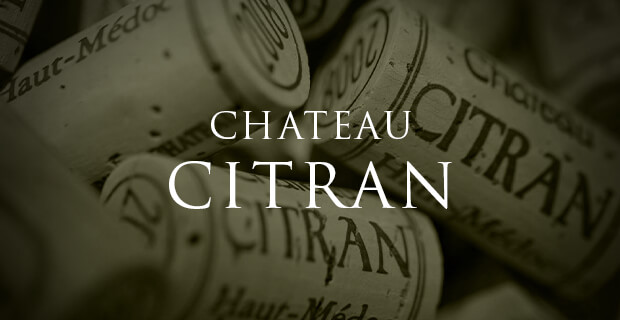 Like the graceful blue peacock embossed on the estate’s one-of-a-kind label, the wines of Chateau Citran combine a certain generosity and powerful with remarkable elegance and finesse. These Cru Bourgeois wines from the Haut-Medoc appellation are sought after not only for their classic Left Bank Bordeaux style but also for their consistent quality for price.

The History of Château Citran Wine

One of the oldest Haut-Medoc Bordeaux chateaux, the history of Château Citran can be traced back to the 13th century. The château is mentioned in records that date back to 1235, at which time it served as a seigneury and fortress belonging to the Marquis de Donissan. The Donissan de Citran family remained at the helm of the château for the six centuries that followed, until 1832. In that year, the descendants of the family sold the estate to a wealthy businessman named Monsieur Clauzel, who rebuilt the chateau that we see on the property today between 1862 and 1864, and elevated the reputation of Citran wines to the forefront of the Medoc. Clauzel also restructured the vineyard to reflect the full potential of the terroir.

In 1945, the Mialhe family of Bordeaux wine merchants acquired Chateau Citran. Between 1945 and 1987, they conducted an extensive renovation of the facilities and restored the vineyards that had been neglected due to wars and economic hardship. The Japanese holding company Fujimoto acquired the chateau next and made further investments into its facilities.

In 1996, the producer Chateau Citran began a new chapter of its history when it was purchased by the Merlaut family, who already have a shining reputation and plenty of experience in the Bordeaux wine industry. Operating under Groupe Taillan, which owns several other chateaux in the region (including Chateau Gruaud Larose in St-Julien and Chateau Chasse Spleen in the Haut-Medoc), the Merlaut family dedicated themselves to further enhancing the quality of Citran wines. In 2010, the Citran Chateau was classified a Cru Bourgeois of the appellation of Haut-Medoc. Since 2012, the property is listed as a historic monument and its beautiful grounds attract visitors year-round.

Situated in the commune of Avensan in the Haut-Medoc appellation on the Left Bank of Bordeaux in France, the Chateau Citran vineyard stretches over more than 247 acres (100 hectares) of vines. The vineyard area is divided into two major parcels, one of which surrounds the historic chateau and the other surrounding the village. The vineyard in Haut Medoc, Bordeaux, France is planted with 50% Merlot, 45% Cabernet Sauvignon and 5% Cabernet Franc grape varieties, relying on principles of sustainable viticulture. The vines, which are aged 35 years on average, are planted in gravel and sandy soils upon a subsoil of asteriated limestone and clay-limestone.

At Citran, the vineyard work is adapted to each plot of vines, depending on the specific character of its terroir. While some plots are cultivated in a traditional way with mechanical soil work and phytosanitary treatments, others are covered with vegetation in order to enhance the biodiversity of the soil. Around one-third of the total vineyard area is organically cultivated.

Following a manual harvest, the fruit arrives to the winery and is carefully sorted on a sorting table before being destemmed and crushed. The vinification of the fruit is conducted traditionally at a temperature of 28°C in a combination of stainless steel, oak and cement vats, which are thermoregulated. Malolactic fermentation follows in barrels, of which roughly 35% are new French oak. The wines stay in these barrels for an aging that takes 15 months.

The Chateau Citran winemaking team, under the guidance of Winemaking Consultant Eric Boissenot, is very exacting when it comes to the selection of barrels, working only with a handful of trusted local coopers. The barrels are racked quarterly and the wines are fined with egg whites, following Bordeaux tradition, before being bottled at the chateau. The typical blend for the Chateau Citran First Wine is Cabernet Sauvignon, Merlot and Cabernet Franc, although the specific proportions of each grape will change from one vintage to the next. Chateau Citran also produced a second wine named Moulins de Citran Haut Medoc and a rosé called La Rosée de Citran.

A Signature Style Known for its Elegance and Finesse

Perfectly symbolized by the graceful peacock embossed on the label of each bottle, the wine of Chateau Citran is known for its remarkable balance of generosity and power with elegance and finesse. The Chateau Citran Haut Medoc Grand Vin is a Merlot, Cabernet Sauvignon and Cabernet Franc blend revealing a deep ruby red color with dark purple reflections. The classic tasting note cites a core of intense red and black fruit aromas are complemented by nuances of roasted coffee beans. The palate of this Haut Medoc red wine reveals a powerful attack, followed by great volume, concentration and freshness, with layers of red and black fruit flavors on a harmonious structure.

While some vintages of Chateau Citran Bordeaux Haut Medoc wine are already quite approachable in their youth, these wines can also age beautifully for 8 to 12 years in the bottle. We recommend serving this Haut Medoc wine at 60° F or at “cellar temperature.” The wines of Chateau Citran pair effortlessly with a wide range of wine and food pairings, especially simple and hearty fare. Try it with a classic lasagna, a beef stroganoff, eggplant parmesan or classic bacon cheeseburger.

We hope you enjoyed this adventure into the world of Chateau Citran in Bordeaux’s Haut Medoc appellation. Take a moment to browse our selection and shop your favorite vintages. If you would like to inquire about the lowest price with sales tax on a certain vintage that you have already tasted or about the ratings received by a certain vintage on Wine Spectator, Jancis Robinson or Wine Enthusiast, do not hesitate to reach out to us directly. Contact our team to arrange a standard delivery of a standard bottle of Chateau Citran Haut Medoc, a large format (like a Magnum of Chateau Citran) or a case from this producer.