Save up to $500 with our Black Friday Week sale* ! Promo code : BF2022 | Learn more *Offer valid until 11/27/2022. Excluding futures wines, rare wines, no discount applicable wines and on sale items.
Not combinable with other promo code. Valid once per customer.

Castello di Ama is named after a small agricultural hamlet, nestled in the hills at an altitude of 500 metres. Five centuries ago, it was the hub of a florid farming and winemaking business...Read More

Castello di Ama is named after a small agricultural hamlet, nestled in the hills at an altitude of 500 metres. Five centuries ago, it was the hub of a florid farming and winemaking business overseen by a group of local families. The present day estate was founded in the 1960s by a group of families who had fallen under the spell of this magical spot. They set themselves the task of reviving Ama's past glories and producing a Chianti Classico that would rank among the world's most prestigious wines. It is the family of Lorenza Sebasti and Marco Pallanti who now run the estate. Lorenza is Roman and the second generation of one of the original families who owned the property. Marco is Tuscan and honed his wine making skills partly in Italy and partly in France. In 2003 he was elected best winemaker of the year by Wine Guide Gambero Rosso. 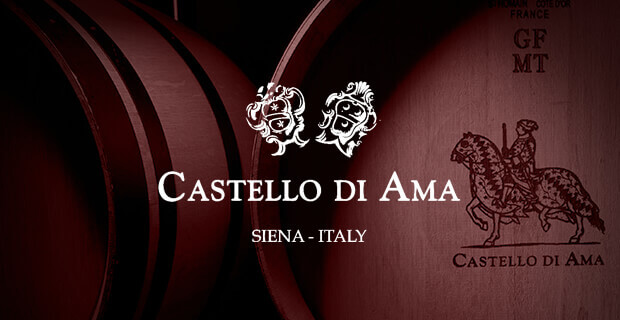 Taking its name from the historical hamlet at the center of the property, Castello di Ama represents the legacy of family collaboration and a terroir used to cultivate vines for centuries. An exquisite aromatic harmony, a beautifully restrained power and a delicate roundness on the palate are the hallmarks of the estate’s emblematic Chianti Classico wines, including the Vigneto La Cassucia and San Lorenzo Gran Selezione. The richesse of Castello di Ama’s celebrated terroir – the soil, the carefully chosen vineyard plots and the divine Tuscan climate – provides all of the ingredients necessary to produce enchanting wines, built to last.

The Castello di Ama (or “castle of Ama”) estate was originally named after an agricultural hamlet situated in the hills of Chianti, at an elevation of nearly 500 meters above sea level. In the 16th century, this hamlet was a central hub for wine production, managed by a group of prominent local families, including several generations of the Pianigiani, Ricucci and Montiagiani. In the 18th century, the Aùa castle was visited by Grand Duke Peter Leopold of Habsburg-Lorraine, and this special event is still commemorated by a plaque on one of the hamlet’s original buildings. The winery at Castello di Ama was founded in the 1970's, when a group of families became inspired by the historic area, realizing the great potential of its vines. These families banded together to bring Castello di Ama back to its days of glory by producing high quality Chianti Classico wines. Today, this winery is operated by Lorenza Sebasti, the daughter of one of the Castello di Ama’s original founders, and Marco Pallanti, a winemaker originally from Tuscany who studied winemaking in France.

In the past 30 years, Lorenza and Marco’s talent and dedication have been recognized on several occasions. In the 2003 edition of Gambero Rosso’s famous wine guide Vini d’Italia, Marco was chosen as Winemaker of the Year. In 2005, the same guide named Castello di Ama the Best Winery of the Year. Then, in 2010, the flagship San Lorenzo cuvee of Castello di Ama was ranked 6th in the world on the Best Wines of the World list of Wine Spectator. Intimately involved with the politics of the appellation, Marco has also served for two terms as president of the Consorzio del Chianti Classico, whose aim it is to safeguard and protect the products and producers of this very special area.

The Unique Terroirs and Wines of Castello di Ama

The Castello di Ama estate expands across 80 hectares (198 acres) planted with vines, at altitudes ranging from 450 to 550 meters above sea level. The vines are arranged at a radius of 3 kilometers from the historic hamlet of Ama and can be divided into four valleys, each one characterized with its own distinctive terroir.

Vigneto Bellavista, a vineyard purchased in 1972, covers roughly 23 hectares (or 58 acres) south and south-western facing vines. These are planted in rocky clay and limestone soils. Fruit harvested in this vineyard since the vintage of 1978 has been used to produce the estate's signature Vigneto Bellavista Chianti Classico cru, but only in the best years. This single-vineyard estate wine contains a blend of 80% Sangiovese and 20% Malvasia Nera, matured for 12 months in French oak barrels of which 50% is new. A small plot of 35-year-old Merlot can also be found in the Bellavista vineyard, and these grapes are used to produce the 100% Merlot mercurial L'Apparita cuvee.

Vigneto La Casuccia was also purchased in the year 1972, and stretches over approximately 18 hectares (45 acres) of soil that is rich in clay, with some pebbles and gravel over the top. The vines face west and south-west, bearing very ripe fruit, which is used to produce the single-vineyard wines called Vigneto La Casuccia Chianti Classico cru. This classic wine blends 80% Sangiovese and 20% Merlot harvested from vines that are 35 year old on average. The wine is matured in oak barrels, of which around 50% is new.

Vigneto San Lorenzo was the third property acquired in 1972, and named after a nearby church bearing the name of the saint. This vineyard expands over around 19 hectares of east-southeast facing vines, which grow in calcareous soils with a large percentage of shale.

Vigneto Montebuoni is a vineyard purchased in 1997 and named after a small village located nearby. The south-southwest facing vines cover roughly 14 hectares and are planted in diverse soil types, which range from clay in the lower parts of the valley to calcareous and stony soils higher up.

Although the specific personality of each Castello di Ama signature depends closely on the terroir from which the vines were harvested, these Chianti Classico wines tend to be dark ruby in color, with ripe fruit aromas of black fruit (blackberries, dark raspberries, black cherries), flowers (particularly, violets) and tobacco smoke as well as leather with age. Wines like the San Lorenzo Gran Selezione represent the very best of the already prestigious appellation, made from the best grapes taken from each vine. Built to age a decade or more, these wines are also the perfect addition to any wine collection.