Viticulture has been a central part of the Trimbach Family for almost four centuries. Now three generations are working together at Maison Trimbach. Since 1626, the Trimbach family has been...Read More

Viticulture has been a central part of the Trimbach Family for almost four centuries. Now three generations are working together at Maison Trimbach. Since 1626, the Trimbach family has been creating wines that express and promote the unique terroir of Alsace, one of France’s sunniest and driest climates. Located in the Haut-Rhin in the town of Ribeauville, Maison Trimbach’s vineyards are dominated by limestone soils, and benefit from the unique Alsatian microclimate provided by the Vosges Mountains on the west and the Rhine on the east. They have vineyard holdings within three Grand Cru sites; Grand Cru Rosacker, where the historical Clos Staine Hune monopole is located, Grand Cru Geisberg and Grand Cru Osterberg. Trimbach produces wine from Alsace’s four noble grape varieties, Riesling, Pinot Gris, Gewurztraminer and Muscat, as well as Sylvaner, Pinot Blanc and Pinot Noir.

Founded in the year 1626 by Jean Trimbach, the Trimbach estate has enjoyed nearly 4 centuries of history and 12 generations of winemaking know-how. This legendary estate, situated in the quaint Alsatian town of Ribeauville, has earned a shining reputation worldwide for its signature style of dry white wines: their most emblematic Riesling, Pinot Blanc, Gewurztraminer and Sylvaner, expressing the dazzling diversity of the Alsace terroir. 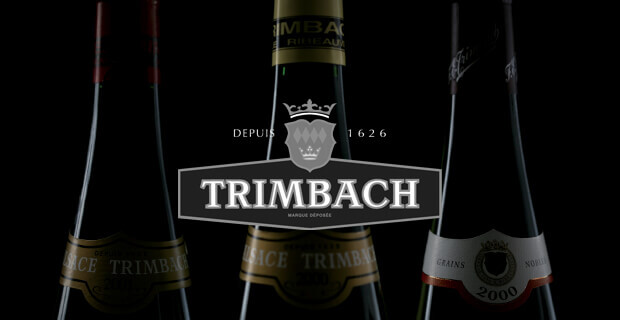 Few winemaking estates encapsulate the essence of family legacy quite like Maison Trimbach in Alsace. The house was founded in 1626 by Jean Trimbach, who moved to Riquewihr from Sainte Marie aux Mines, nearby. Twelve generations of winemakers would carry out almost 4 centuries of winemaking at this historical estate, starting with the founder’s son Jean-Jacques (born in 1633) who also became the mayor of Riquewihr. The founder's grandson Jean (born in 1677) followed in his father's footsteps, inheriting both the winery and the mayordom of his hometown. In the following generation, Jean-Jacques (born in 1750), became a cooper and specialized in wine barrels, bringing valuable know-how to the family business.

The winery was later passed down to Jean-Louis (1783), followed by Jean-Frederic (1811) and then Frederic Emile (1839), who played a particularly important role in the development of the business. Frederic Emile lent the company his initials (F. E.), which have been kept ever since, and achieved the highest quality certificate at the International Show of Brussels in 1898. After World War I, Maison Trimbach was transferred to the town of Ribeauville. At this time, the winery was run by Frederic Theodore, a passionate promoter and pioneer of Alsatian wine, whose expert advice was sought out throughout the region.

The winery was most recently owned by two grandsons of Frederic Theodore, Bernard and Hubert. Bernard's sons, Pierre and Jean took over the firm in the 1980’s, beginning with their work on vinification of the wines and promotion of the estate. Pierre’s daughter Anne has recently become the oldest member of the 13th generation to join the family business, followed by Jean’s son Julien. To this day, the family maintains a very close control over each operation, from the cultivation of the vines to bottling.

A Pure Expression of the Alsatian Terroir at Maison Trimbach

The 40 total hectares making up the Maison Trimbach estate expand over more than 50 parcels in 6 villages, including Ribeauville, Bergheim and Hunawihr. The estate’s vines are planted in a vast array of soil types, including limestone, sandstone, marl and clay. High degrees of limestone in some parcels lend a characteristic minerality to the wines. And while Maison Trimbach produces wines from Pinot Blanc, Gewurztraminer and Sylvaner, the emblematic Alsatian varietal of Riesling is by far the flagship grape of the estate, praised for the ease with which it expresses the vastly diverse Alsatian terroir. The vineyards of Trimbach enjoys a microclimate very unique to Alsace. The Vosges Mountains nearby protect the plain from too much precipitation, while the cool breeze allows the berries to mature gradually, developing complex flavors and aromas.

The vines of Trimbach are managed by means of integrated, sustainable winegrowing practices. Most of their cuvees are fully organic and the estate is in the process of converting to biodynamic practices. The vines are closely pruned in the winter and moderate yields of highly concentrated, intensely flavored grapes are encouraged.

The fruit is harvested exclusively by hand and delicately pressed before the juice is transferred by means of gravity to the cellar. Here, Pierre Trimbach gets to work vinifying and maturing the wines, always keeping in mind the aim to conserve the personality of the grape variety and the terroir from which it came. Both stainless steel tanks and old wooden casks are used in the production of these wines, which are bottled in the spring after harvest.

For nearly four hundred years the family has specialized in the production of dry white wines, which are often described as very strictly structured and boasting excellent aging potential. Pierre Trimbach, who has been at the helm of over 30 vintages at the estate, aims to ensure a certain balance in his wines, by controlling the level of acidity while also retaining the natural tension of the wines.

The Wines of Maison Trimbach

Maison Trimbach offers several different ranges of cuvees. Traditional dry Alsace white wines are perhaps best represented by the Classic Range, made from carefully selected fruit from Ribeauville and its surroundings. Rather than calling these wines “basic” or “entry-level,” the Trimbach team considers them the most classic and representative reflections of Alsace’s four main white varieties and terroirs. Their classic Riesling is perhaps their most emblematic wine, offering a delicate bouquet and a perfect balance between dryness, fruitiness and a natural vitality.

Within the “Réserve Personelle” range, the Cuvee Frederic Emile is also the family's signature wine. This dry and mineral Riesling wine is a pure representation of the House’s Philosophy, boasting a wonderful aging potential that makes it a collector's dream come true. The grapes are grown in the Grands Crus of Geisberg and Osterberg, terroirs characterized by marl-limestone-sandstone soils and a kind of chalk flecked with fossilized shellfish. The Cuvee Frederic Emile is the prestigious signature wine of the house, available at many of Europe’s Michelin-starred restaurants.

Finally, the Prestige and Collection range includes the exceptional and rare Clos Sainte Hune Riesling, produced from the Rosacker vineyard, a 1.67 hectare plot in the village of Hunawihr that has been in the family for over 200 years. Made with grapes selected from 50-year-old vines planted in a predominantly limestone subsoil, this legendary Riesling offers extremely concentrated fruit flavors and a refined minerality on the finish. This wine has a truly remarkable aging potential, as it can be kept for 10 years after bottling before even reaching its peak. As only 8,000 bottles are produced per year on average, the Maison Trimbach Clos Sainte Hune Riesling makes for the perfect addition to any fine wine collection.

The elegant and balanced wines of Maison Trimbach have earned a special reputation in the world of wine, and have helped defined the "Trimbach Style,” which in turn has influenced many other wineries in Alsace. A rich legacy of winemaking tradition paired with the unique terroirs of the regions has led the estate to achieve global renown for complex and expressive cuvees, and a consistency in quality for almost four hundred years.