Since the 16th century, the Mellot family can be found in the local archives as vinegrowers and wine merchants. Their continued success led King Louis XIV to a appoint César Mellot as his...Read More

Since the 16th century, the Mellot family can be found in the local archives as vinegrowers and wine merchants. Their continued success led King Louis XIV to a appoint César Mellot as his personal wine consultant in 1698. Thus, in the early 19th century, Alphonse Mellot created the family home in Sancerre which continued its expansion (over 30 hectares) from father to son, the eldest of each generation bearing the name of the founder. The wines are produced in the high vineyards of Sancerre, composed of limestone soil, expressing the noble grape variety Sauvignon Blanc in all its delicacy, bouquet and transparency.

Alphonse Mellot | Sancerre at its Greatest

From the legendary Domaine de La Moussiere vineyard of Sancerre, where ancient vines stretch their roots deep into Kimmeridgian limestone soils, come some of the greatest Sauvignon Blanc wines in the world, their labels graced with the signature of Alphonse Mellot. Today run by the 19th generation of Mellot family winemakers, who cautiously guard a winemaking legacy over 500 years old, this estate is clearly in a league of its own, even classified “hors concours” which quite literally means “unrivalled in quality.” 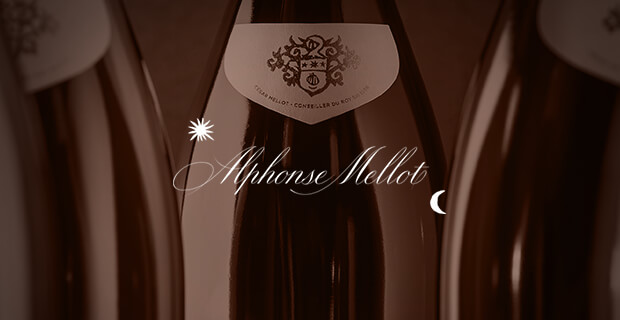 Indulge in the waves of citrus, oak and chalky minerality in each glass of Alphonse Mellot white or try their fruity, spicy Pinot Noir wines, some of the best expressions of Sancerre in red.

The earliest records of the Mellot family in the Sancerre region of France date back to 1513. Already at this time the family was considered to be a leading figure in the production and sale of high-quality wines from the region. In 1698, César Mellot was appointed Wine Advisor to Louis XIV, gaining even more recognition for the family’s wines in Paris and Versailles. In the early 19th century, the family established a tavern in Sancerre, which offered local wines and became hugely popular. But it was not until 1881, when Alphonse Mellot was first granted a license to ship wines all over France and the world, that the international reputation of the Mellot family wines truly flourished. Since then, the company has been run by successive generations of the Mellot family, passed down from father to son, with the eldest son continuing to bear the name Alphonse.

Recently, the Alphonse Mellot estate has passed from Alphonse Senior (of the 18th generation) to his son Alphonse Junior and daughter Emmanuelle. Together, Alphonse and Emmanuelle Mellot have continued the legacy of their ancestors, while also lending their own unique touch to the wines of the estate. Today, they run the estate’s famous flagship Domaine de la Moussiere, along with family parcels Le Manoir, Les Herses, Satellite, Le Paradis and (the aptly named) Generation XIX. Since 2005, they have also been working on a new plot named Domaine des Penitents, situated 35 kilometers from Sancerre.

At the heart of the Alphonse Mellot estate is its flagship La Moussiere vineyard in the Sancerre appellation of France’s picturesque Loire Valley. Comprising 30 hectares all in one piece, this beautiful and historic site is home to the family’s oldest vines and is classified as a unique category of Sancerre vineyard. Here, vines of Sauvignon Blanc and Pinot Noir stretch their ancient roots deep into rich Kimmeridgian limestone soil, Saint Doulchard marl and chalky Buzancais soils. The south-facing exposure of this vineyard in upper Sancerre allows the fruit to enjoy ample sunshine and ripen fully even in the cool continental climate characterizing the Sancerre appellation.

From the vines of the limestone-rich La Moussiere vineyard, Alphonse Mellot produces the flagship “La Moussiere” blend in red, white and rosé, the “Generation XIX” in red and white and the estate’s iconic “Edmond” cuvée. The estate also produces a 100% Pinot Noir red wine called La Demoiselle from flinty, clay soils from a site called La Demoiselle and the En Grands Champs Pinot Noir from Buzancais chalk soils at the top part of the La Moussière.

All farming at Alphonse Mellot is organic and certified biodynamic, with a team of 40 employees dedicated to the estate’s 47 hectares of vines. The vines are planted at a high density of 8,000 to 10,000 vines per hectare and pruned throughout the winter to oxygenate the soil and encourage greater soil biodiversity all the way down to the rocky subsoil. The buds are limited in number to encourage a lower yield of very high-quality, fully ripened fruit. The team also carried out a thorough observation of the leaf stomata, through which the vines synthesize the “minerals of the sky.”

From these beautiful terroirs, deemed some of the best in Sancerre and in France, the Alphonse Mellot team cultivates roughly equal amounts of Sauvignon Blanc and Pinot Noir, the two iconic grape varieties of the appellation.

At Domaine Alphonse Mellot, the grapes are harvested manually into small trays in order to avoid damaging the fruit before its arrival to the winery. Constructed between the 15th and 17th century , the Alphonse Mellot cellars are located in the heart of the historic town of Sancerre and are equipped with some of the finest winemaking equipment.

The Alphonse Mellot white Sancerre wines are produced with sequential pneumatic pressing of the Sauvignon Blanc grapes, followed by 48 hours of static settling at temperatures below 10°C. For the La Moussiere white, fermentation takes place in vats for roughly 50% of the fruit and the rest in new casks at temperatures between 18° and 23°C. Meanwhile, the Generation XIX white is fermented in 900 liter truncated vats. The prestigious Edmond cuvée is fermented in new casks for 60%, casks of one previous wine for 20% and casks of two previous wines for the rest. The wines are aged in vats on fine lees for 7 to 8 months for La Moussiere, 10 to 12 months for the Generation XIX white and 10 to 14 months with regular pump-overs for the Edmond cuvée.

The red wines of Alphonse Mellot undergo a period of cold maceration with punch-downs ranging from 8 to 12 days before fermentation begins. Fermentation takes place in 45 or 60 hectoliter truncated wooden vats, never exceeding 28°C, in order to maintain the delicate flavors and aromas of Pinot Noir. Alcoholic fermentation lasts 4 weeks on average, after which the fruit is gently pressed. The press wine is either blended with the free run wine or vinified separately. The wines are pumped into casks, where they undergo malolactic fermentation. The La Moussiere red is aged for a period of 10 to 18 months in 80-100% new casks, while XIX Generation and La Demoiselle cuvées age in new casks for roughly 14 months.

How to Enjoy the Wines of Alphonse Mellot

Today, the Alphonse Mellot portfolio comprises three single-vineyard white wines and four reds, known around the world as some of the best expressions of the Sancerre’s Kimmeridgian limestone, chalk and marl soils. To get the most out of the tasting experience, we recommend serving the whites at 10 to 12° C when enjoyed as an aperitif or 12 to 14°C when paired with food. The Alphonse Mellot reds should be served at 14 to 16° C on their own or 14 to 18° C with a meal.

The estate’s flagship biodynamic Alphonse Mellot “La Moussiere” white exudes a bouquet of white flowers on the nose, while the palate is lively, supple, deep and welcoming, with notes of crushed lime and nectarine, along with earthy mineral notes. This iconic white Sancerre will pair beautifully with fish tartare, broiled lobster tail, braised ham in a creamy white sauce or – a true Sancerre classic – Chavignol goat cheese.

The Alphonse Mellot “Edmond” is the estate’s prestige cuvée made of Sauvignon Blanc, a Sancerre icon with a rich, ripe and powerful nose revealing aromas of lemon, vanilla, honey and brioche with a touch of wood from oak. On the palate, Edmond is incredibly smooth and well-rounded, offering flavors of licorice and aniseed, vanilla and pepper. The finish is magnificently long, spicy and incredibly mineral. Pair this wine with your noblest of seafood dishes – Belon oysters or plump and juicy scallops – or enjoy it with a roasted spring chicken basted with butter and herbs.

Meanwhile, the reds of Alphonse Mellot are delightfully mellow, structured and rich, offering luscious red berry fruit and a pleasant spicy hint on the long, lingering finish. Pair these red Sancerre wines with freshwater fish like pike-perch and catfish, a smoky eggplant caviar or pears poached in wine.