BIG NEWS : TARIFFS ARE NOW WAIVED FOR AT LEAST 5 YEARS !
Welcome back to our wine world and don't hesitate to rediscover our Our Pre-Arrivals selection! Buy now
212-639-9463
Need help?

Even though the Chateauneuf vineyards date back to the twelfth century, it wasn’t until the fourteenth century that Chateauneuf-du-Pape took on an important viticultural role. This was the time...Read More

Even though the Chateauneuf vineyards date back to the twelfth century, it wasn’t until the fourteenth century that Chateauneuf-du-Pape took on an important viticultural role. This was the time when the French popes had relocated to Avignon. Founded in 1933, the appellation is special for many reasons. The first is that it is allowed to use 13 red and white grape varieties, which can be included in the same blend. This is truly an exceptional art of blending that results from the search for ultimate balance. The emblematic red grape variety of Chateauneuf-du-Pape is Grenache, which can even be found as a varietal wine. More often Grenache is blended with Syrah, Mourvèdre, Carignan and Cinsault, which are other grape varieties used in red blends, but in smaller proportions. Another interesting historical fact about Chateauneuf-du-Pape is its connection with the Appellation d'Origine Controlee (AOC) system. The Chateauneuf winemakers united as a union in 1894. Since 1923, they have been the first group to promote specifications and delimitation of an appellation’s production area.

The appellation is located in the southern Rhone Valley not far from the cities of Orange and Avignon. It is truly one of the most renowned appellations in the Rhone Valley and covers 3,2000 hectares. The appellation, which dominates the Comtat Venaissin plain is the driest area in the Cotes du Rhone. Heat is stored in the soil’s large, round pebbles (galets roules) during the day, and then the vines use this heat at night to ensure a constant ripening of the grapes. This phenomenon is commonly known as the "oven effect”. Because of all of this, the wines are concentrated, rich, mineral and very aromatic. Both the red and white wines from Chateauneuf-du-Pape enjoy great cellaring potential.

The Intricacies of Chateauneuf-du-Pape

Expanding over a sprawling 3,133-hectare terrain planted with a seemingly infinite range of grape varieties, Chateauneuf-du-Pape is truly grandiose in scale. This AOC-level appellation in the Southern Rhone Valley is home to a vast array of estates producing some of France’s most sought-after red and white wines, made even more extraordinary by the region’s intricate history and terroir. 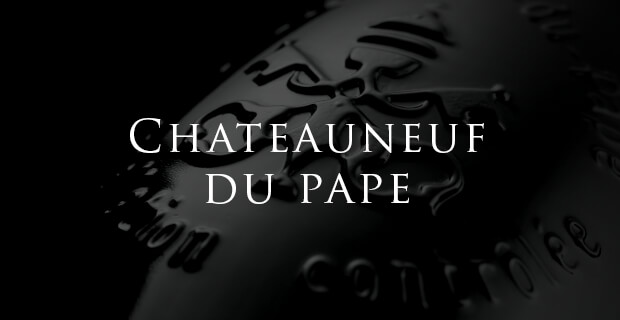 Chateauneuf-du-Pape: The Wine of Popes

Look more closely at the label on a bottle of wine from Chateauneuf-du-Pape and you will likely notice a pair of papal keys. In the fourteenth century, the popes fled Rome, choosing Avignon as their new home, where they would reside from 1309 to 1378. At this time, the region was already home to grape vines, planted by Bishop Geoffroy of Avignon as early as 1157. Clement V, the first pope to move to Avignon, also planted vines, essentially becoming one of the first winemakers of Chateauneuf-du-Pape.

When Pope John XXII arrived in Avignon, he fell in love with these wines, bestowing upon them the prestigious title of “Vin du Pape” (or Vin des Papes, Papal Wine). The region producing them would become known as “Le Chateauneuf-du-Pape” (or, “the new castle of the pope). John XXII also ordered the construction of the Chateauneuf-du-Pape castle, which serves as the symbol for this prestigious appellation. Since then, the castle (and the vines and villages it overlooks) has survived the passage of time, religious wars, the French Revolution and German bombings, with one remaining tower still reigning over the steadfast appellation.

The AOC Status of Chateauneuf-du-Pape: The Promise of Quality

In 1923, the region’s most famous winemaker, Baron Le Roy de Boiseaumarie from Chateau Fortia, took the first steps toward establishing the Appellations d’Origine Controlee (AOC) of France, a classification of controlled designations of origin. The “Chateauneuf-du-Pape Winemakers’ Union” was created with its aim being to lobby for AOC status for the region. At the helm of this union was Baron Le Roy, whose professional experience as a lawyer helped in navigating the French court system. Chateauneuf-du-Pape finally obtained its AOC status in 1936, becoming France’s very first winemaking AOC.

Chateauneuf-du-Pape: A Mosaic of Terroirs

Unlike the northern Rhône Valley, the southern Rhône is a hot and dry region, with an average of 2,800 hours of sunshine per year. The Mediterranean climate brings long, hot summer days and cool, wet winters. The many hills and plateaus of this area are home to goblet vines (also known as “bush vines”), pruned into the shape of a cup to protect the grapes from the harsh rays of the sun.

The vineyards here enjoy a bit of relief from the heat when the cool breezes of the Mistral Wind blow by from the northeast. Blowing at a speed that can reach over 100 km/h, the Mistral dries out the grapes, helping concentrate the sugars and flavors in the latter. However, the Mistral can also be quite destructive. By blowing for too long, it can suck out an excessive amount of water from the vines, dehydrating them completely. These winds can also uproot the vines. For the most part, however, the Mistral is more of a blessing than a curse, keeping the vines dry, free of bad bacteria and diseases.

The Chateauneuf-du-Pape appellation is home to a patchwork of eighteen different types of soil. While the rocky western side of the region is dominated by limestone soil, with sand, clay and large stones found on the plateaus, the northern part is characterized by a mixture of sand, red and grey clay, and limestone. Less stony soils, alternating with marl can be found to the east. In the south, shallow sand and clay subsoils dominate, resting on a well-draining layer of gravel.

One of the most emblematic features of the Chateauneuf-du-Pape terroir are the large, round pebbles (galets roules), left behind by glaciers millions of years ago. These galets store heat during the day, radiating it at night and keeping the vines warm, which contributes to the even ripening of the grapes! These stones also store water in the soil, providing a much-needed reserve for the vines during the scorching hot days of summer. The Plateau de la Crau area of Chateauneuf-du-Pape offers what is perhaps the most representative terroir of this wine region.

Grape Varieties of Chateauneuf-du-Pape: The Three Musketeers of the GSM Blend

Mirroring the complexity of soil types in Chateauneuf-du-Pape is the wide array of grape varietals planted in the appellation. Thirteen grape varietals are allowed in the blend of Chateauneuf-du-Pape wines, not including the many different color variants of these grapes. Grenache, for example, has four variants: Grenache noir, rose, gris and blanc (black, rose, grey and white). So, there are actually a total of 22 authorized grapes in this appellation!

Grenache is considered the backbone of the appellation and is often blended with Syrah and Mourvedre to produce the iconic “GSM” blend. These wines are aromatic, full-bodied, with flavors of dark fruit and spice. In the classic GSM blend, Grenache brings red fruit flavors and high alcohol, Mourvedre the power and pigment, and Syrah balances out the other two. Although these “three musketeers” tend to dominate the GSM blend, the latter also sometimes includes Cinsault and Counoise, or trace amounts of Vaccarese, Muscardin, Picpoul and Terret Noir. Red wines of Chateauneuf-du-Pape can also include white varietals - like Clairette, Bourboulenc, Roussanne and Picardin – in the blend, a true singularity of the appellation!

While red wines make up around 93% of the production in Chateauneuf-du-Pape, the AOC is responsible for some of the rarest and most renowned white wines of France. The most common white grape varietals to be found in these are Grenache Blanc, Roussanne, Clairette Blanche and Bourboulenc. Because Grenache Blanc receives plenty of sun throughout the year, the grapes ripen with a high sugar level, giving the finished wine a high level of alcohol. Clairette Blanche and Bourboulenc bring plenty of freshness and a citrusy character, while Roussanne offers notes of peach. And for the texture and tannins, look no further than Clairette Rose. The white blends of Chateauneuf-du-Pape are truly rare, but definitely worth tasting.

A Common Thread through the Wines of Chateauneuf-du-Pape

Describing one style of Chateauneuf-du-Pape wines presents a challenge, since the dynamic terroir and endless number of varieties grown there are produced in a sheer number of styles by a vast array of producers. There is, however, a common thread tying together all of these styles: a warmth and a richesse, a spiciness and ripe fruit. These wines tend to offer red fruit flavors of raspberry and strawberry, along with black fruits, like black cherries, blueberry and black currant. The profile of these wines also has an earthy side, with notes of leather and barnyard coming through on the nose and palate. Oaky flavors reveal themselves through tobacco, toast, smoke and baking spices (think clove and vanilla).

Blends with higher proportions of Mourvedre show a gamey or barnyard character, coming from the Brettanomyces yeast that can be found in wineries, especially in oak barrels. Commonly referred to as “Brett”, this quality is a source of debate among wine lovers, with some enjoying the extra complexity it seems to give wines, while others not fond of it at all. Either way, allowing the wine to sit open for a few hours will dissipate the most powerful barnyard aromas.

Châteauneuf-du-Pape wine also tends to have higher alcohol levels than other French wines, with the minimum strength being 12.5%, but most starting at 14%. Whatever your preference may be, Chateauneuf-du-Pape offers a wide range of styles, from fresh and elegant to the more tannic and austere.

The Estates of Chateauneuf-du-Pape: Keepers of the Papal Keys

One of the appellation’s most prestigious ambassadors is Chateau de Beaucastel, which has been in the Perrin family for five generations. The estate’s eponymous cuvee Château de Beaucastel is a masterpiece red blend with thirteen varieties, dominated by Grenache and Mourvedre. The Chateau de Beaucastel Hommage a Jacques Perrin is one of the appellation’s rarest wines, paying homage to the owner’s father. This age-worthy wine is made exclusively in the best vintages from mostly old Mourvedre vines, which produce very small yields of intensely concentrated and mature berries.

Another must-try reference of the appellation, Chateau Rayas dates back to 1880, but it was Jacques Reynaud, one of the greatest winemakers in the world, who brought it to its present fame. His nephew Emmanuel continues his uncle’s work today. The estate covers 23 hectares of vines, of which 12 are situated in Chateauneuf-du-Pape.

The dazzling diversity and dynamic nature of Chateauneuf-du-Pape allows the region to have something to match every preference, whether you desire a masterful blend of 13 varietals, a classical GSM or a rare single-varietal cuvee.

The impeccable scale of Chateauneuf-du-Pape helps make it one of the most intriguing appellations of France. This region is home to a multitude of terroirs and grape varieties, each planted to the terroir that best fits its needs. If there is one word to describe the wines of Chateauneuf-du-Pape, its “intricate.” The wines produced here will engulf you, awakening your senses and leaving you yearning for just one more sip of the pure radiance expressed in the glass.