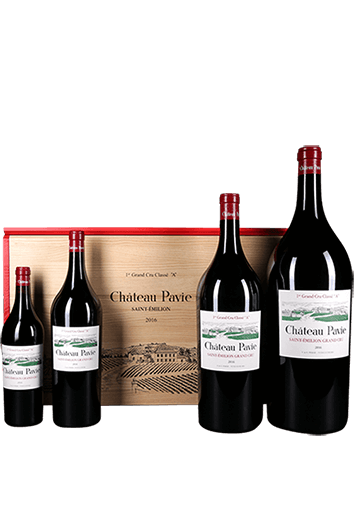 The origin of this property dates back quite some time. The vines were cultivated on the slopes of what is now Chateau Pavie from the 4th century onward. Owned by Chantal and Gerard Perse since March 1998, Chateau Pavie, a Premier Grand Cru Classe "A", has one of the most beautiful terroirs of Saint-Emilion. Chateau Pavie is recognized for the structure and elegance of its wines resulting from a harvest with yields maintained at the level that best suits the terroir: 31hl / ha.

The Chateau Pavie vineyard is made up of a single block of 37 hectares, which makes it one of the greatest Premiers Grands Crus Classes of Saint-Emilion.

Located to the south-east of the Saint-Emilion hill, the vineyard is spread over three levels going up the hill, with vines aged 49 years on average. The “plateau” (85 meters above sea level) is composed of clay-limestone soil over asteroid limestone, while the “mid-coast” (55 meters above sea level) is composed of a brown clay soil and fine-textured limestone. The "pied de cote" is made up of sandy / sandy-clay soils with iron ore between 60 and 80 cm and sandy-gravelly soils. Particular attention is paid to the vineyard, part of which has been the subject to a replanting plan, including the enhancement of the training to increase the leaf area, pruning adjusted to the age of the vines, thinning and stripping.

Chateau Pavie has recently unveiled its latest innovation, the “Collection Alienor”. Bearing the first name of Alienor d'Aquitaine, Queen of France, then of England married to King Louis VII at Saint Andre Cathedral in Bordeaux and mother of Richard the Lionheart, this box is a refined invitation to (re-)discover through different formats a vintage released on the market five years ago.

This first edition casts the spotlight on the 2016 vintage.

Since the 2000 vintage, the wines of Chateau Pavie have been housed in a bottle called "Alienor", whose shoulder, frustoconical shape and deep puncture echo the bottles of yesteryear, while also ensuring optimal aging. In order to celebrate the classification as a Premier Grand Cru Classe “A” in 2012, Château Pavie has also been bottling its magnums with this same format since that date.

Each numbered box from the "Collection Alienor" contains 4 elegant formats of this 2016 Chateau Pavie. Very refined, each box has been developed in the workshops of a local partner, ADAM, labeled "Living Heritage Company".

Standard bottle, magnum, double magnum, imperial... 4 occasions to (re-)discover this 2016 vintage in an exceptional box produced only in 100 copies. A rare and prestigious collection.

The perfect expression of the unique terroir of this iconic Saint-Emilion property, the 2016 Chateau Pavie is a collector's vintage. 2016 is unanimously recognized by international critics for its freshness, delicacy and aromatic richness. Earning a score of 100/100 from both Wine Advocate and James Suckling, this remains the flagship vintage in the history of the property.

This 2016 “Alienor Collection” from Chateau Pavie is an opportunity to taste a great vintage in 4 different bottle formats, which, thanks to their large size, will be able to age beautiful for many years to come. While this great Saint-Emilion wine can be cellared in its standard format until 2036, its aging potential is even more exceptional in a large format.

Other wines that Could be of interest to you