A true legend of Italian viticulture, Giuseppe Quintarelli is considered the father of Amarone, the famous wine from the Veneto region. Deceased in 2012, the man has had great influence on many...Read More

A true legend of Italian viticulture, Giuseppe Quintarelli is considered the father of Amarone, the famous wine from the Veneto region. Deceased in 2012, the man has had great influence on many generations of winemakers, including Romano Dal Forno, and leaves behind a considerable legacy that his family will perpetuate in keeping with the tradition and style developed by the maestro.

The history of the estate begins in 1924, when Silvio Quintarelli founded it. His younger son, Giusepppe, took over the family business in the 1950s. From then on, he worked tirelessly and with great passion, making every effort to raise the estate's wines to the highest level of quality. The Giuseppe Quintarelli estate is located in the village of Negrar, on the hills north of Verona, in the heart of the Valpolicella region (“valley of many wineries” in Latin), in the province of Veneto, northern Italy. Located at an altitude of 500 meters, the vineyard covers 12 hectares and produces, each year, a limited quantity of 60,000 bottles. The Giuseppe Quintarelli estate has earned its reputation thanks to its legendary Amarone della Valpolicella Classico, Recioto and its cult wine, Alzero.

Known to be a great perfectionist, Giuseppe Quintarelli focused on producing only exceptional wines, sold in limited quantities after many years of aging. After the appassimento, a traditional technique of drying the grapes on racks, the wine is pressed and aged in Slavonian oak barrels for 7 years for Amarone Classico Superiore, and 10 years for Amarone della Valpolicella Classico Riserva. Following a very strict code of conduct, the estate does not sell Amarone when the quality is deemed insufficient. A fervent defender of tradition, the Quintarelli estate is a minimalist when it comes to marketing and has no website or social networks.

Excellence, tradition and patience are the values reflected by the wines of Quintarelli, renowned for their unique style and faithfully expressing the unique touch given to them by the maestro. A signature wine of the Quintarelli estate, the Amarone impresses with its softness, elegance and length on the palate.

Giuseppe Quintarelli | The Father of Amarone 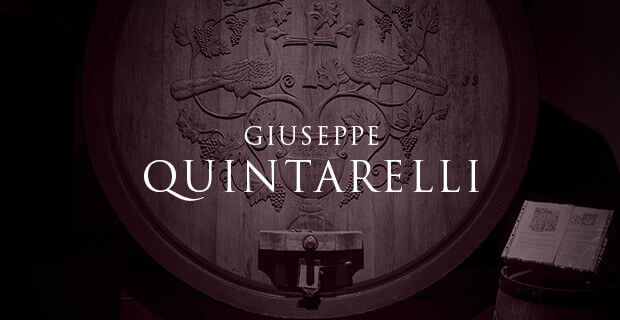 An uncompromising loyalty to tradition, an obsessive attention to detail, a patience forever tested by the passage of time… These are the values reflected through the beautiful hand-written labels gracing each bottle of Giuseppe Quintarelli wine. More than just emblematic of their native Veneto, these near-mythical Amarone, Recioto and Valpolicella Classico Superiore are considered the very definition of what these styles should be, setting the benchmark for the region for nearly a century. In the story of how this estate and appellation rose to the status they enjoy today, one character stands out among the rest: the undisputed Maestro del Veneto (or Bepi for short), the late Mr. Giuseppe Quintarelli.

The Story of a Pioneer: Giuseppe Quintarelli

The story begins with a man by the name of Silvio Quintarelli sharecropping vines with his brothers in Figari, within the municipality of Marano di Valpolicella. Following World War I, the family business found a new home in the Negrar Valley, where Silvio set up his own estate in 1924, together with his wife and sons. His youngest son, Giuseppe Quintarelli, was born in 1927 and took over the management of the company in 1950.

In the decades that followed, Giuseppe would come to expand his father’s estate to its current 12 hectares, all the while applying labor-intensive methods and a pointed attention to detail with the aim to elevate quality. He planted Corvina, Corvinone, Rondinella, Croatina, Nebbiolo, Sangiovese, Garganega, Saorin and Trebbiano Toscano, as well as Cabernet Sauvignon, Cabernet Franc, Merlot, Sauvignon Blanc and Chardonnay. Never afraid of a bit of experimentation, Giuseppe nevertheless held true to the region’s traditions and the savoir-faire inherited from his father and grandfather. He aged his wines in Slavonian oak botti for several years, according to local custom.

Through decades of hard work and an undying devotion to quality, Giuseppe (locally nicknamed Bepi) would earn the distinguished title of Il Maestro del Veneto, becoming a mentor and inspiration for generations of Veneto winemakers to come. In January of 2012, at the age of 84, Mr. Quintarelli passed away, leaving behind a larger-than-life legacy: a style he helped develop and a range of sought-after, artisanal wines, decorated with his hand-written labels. Today, this legacy is closely watched over by Giuseppe’s daughter Fiorenza, her husband Giampaolo, and their sons Francesco and Lorenzo.

The Source: In the Vineyards of Giuseppe Quintarelli

Today, the property expands over 12 hectares of vineyards, along the eastern side of the Negrar Valley, at an altitude of around 500 meters, in the heart of Valpolicella. The estate cellars are located atop the Ca Paletta hill in Cere di Negrar. The Quintarelli vineyards are planted with a wide range of varieties, trained by the Veronese pergola system for local grapes like Corvina and Corvinone, and the Guyot system for the international ones like Cabernet Sauvignon and Merlot. The vines, which are 30 years old on average, stretch their roots deep into soils of limestone and basalt. No chemical herbicides are used in the cultivation of the vines and the yields are deliberately kept low through strict pruning and green harvest, as a way to favor quality over quantity. The harvest typically takes place pretty late in the season, ensuring that the fruit sufficiently ripens. The picking takes place is several passages through the vineyards, with each plot and grape variety harvested only when it is ready.

Selection in the vineyard is extremely thorough, and only the best fruit is brought in. In vintages where the quality of the fruit is not deemed sufficient, the Quintarelli team produces no Amarone at all. For example, 2005 was quite a difficult vintage in the region, with hailstorms that prevented the grapes from reaching the right level of maturity. As a result, no Amarone was produced in 2005, with the Quintarelli family preferring to maintain a consistent level of quality rather than settling for short-term profit.

To produce Amarone della Valpolicella Classico DOC and Amarone della Valpolicella Classico Riserva DOC wines, a blend of around 55% Corvina and Corvinone, 30% Rondinella and 15% Cabernet Sauvignon, Nebbiolo, Croatina and Sangiovese grapes are used. Around 50% of the fruit is directly pressed, while the other 50% of the whole bunches are left to dry for 5 months in designated drying rooms in a process known as appassimento. A noble rot appears on the grapes around November and develops mostly through January. By losing a majority of their water content, the “raisined” fruit become extremely concentrated in flavor and sugar. After appassimento, the fruit is pressed and vinified at low temperatures. After 20 days of maceration, alcoholic fermentation takes place with indigenous yeasts only in stainless steel vats. This is a slow fermentation, taking 45 days to complete. They are then transferred to the estate’s beautiful, hand-carved Slavonian oak botti, where they age for many years – 8 years for Amarone and 10 for Amarone Riserva. The resulting wines are incredibly smooth, elegant and persistent. Wines, indeed, to be remembered.

The Quintarelli team also produces a highly sought-after Valpolicella Classico Superiore DOC wine by similar methods and from the same grape varieties. For these wines, 50% of the fruit goes through appassimento for only 2 months and after only 3-4 days of maceration, alcoholic fermentation takes place with indigenous yeasts. The wine is racked and left to sit until February, at which time it is racked onto the lees of the Amarone, where it begins a second alcoholic fermentation, in a process known as ripasso. The Valpolicella also spends 7 years in the Slavonian oak botti. The result is a very elegant wine, with aromas of black and red cherries, kirsch, smoke and black pepper. On the palate, the tannins are finely-grained, coating the palate long into the very smooth, persistent finish. This is a big wine to pair with equally big food, especially juicy meats like roast lamb, beef ribs or smoked sausage.

The Giuseppe Quintarelli Recioto della Valpolicella Classico DOC is produced from a very careful selection of grapes from sites that are specifically suited to the production of Recioto. The grapes chosen are those appearing on the upper shoulders of the clusters, with the most exposure to the sun. The wine is produced in a way similar to Amarone, but fermentation is stopped before all of the sugars are consumed, resulting in a sweet wine with residual sugar. This wine delivers intense layers of sweet black cherries, ripe figs, Christmas spices, dark chocolate, roasted coffee beans and well-worn, warm leather. On the palate, the Recioto shows off earthy, savory aromas, which complement the ripe fruit, on a bed of smooth, velvety tannins. The Quintarelli Recioto will guarantee an unforgettable ending to dinner with friends and family. The perfect accompaniment to molten chocolate lava cake, or pretty much any dark chocolate dessert.

Finally, the Quintarelli family also produces a handful of other cult wines, including the single-vineyard bottling Rosso Ca’ del Merlo IGT, the early-harvested Amabile del Cere “Bandito” IGT and the Alzero Cabernet IGT, made of a blend of Cabernet Sauvignon, Cabernet Franc and Merlot.

Whichever style you choose, the wines of Giuseppe Quintarelli seem to demand to be appreciated with time. At their cellar near Verona, no spittoon is offered to those who come to taste. When asked about this, Francesco Grigoli responds that his grandfather did not want anyone to spit his wine. And considering the tremendous time and commitment that goes into each bottle, we’re certainly not surprised.