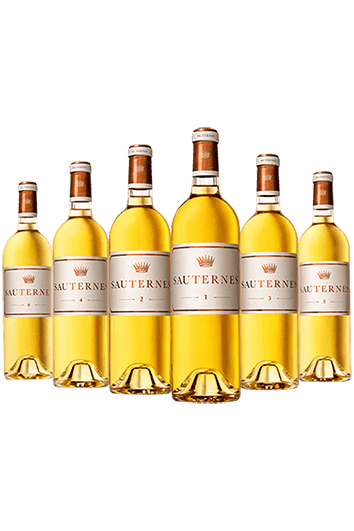 Would you wish to know when this product is back in stock?

Château d’Yquem's reputation has been developed over the past 400 years, with a high point in 1855, when it was recognized as a Premier Cru Classé Supérieur in the official classification established upon the request of Emperor Napoleon III for the Paris Exposition Universelle. The only wine estate to have achieved this honor, Yquem sits unchallenged among the legendary great wines.

Château d’Yquem has around 247 acres in production, planted with 75% Semillon and 25% Sauvignon Blanc. The Ciron, a tributary of the Garonne River that is essential to the creation of Sauternes wines, provides an exceptional micro-climate for the vines of the estate. It is, in fact, the autumn morning mists, just before the harvest, which lead to the appearance of the Botrytis Cinerea “noble rot”. Other than the characteristics of its “terroir” and climate, Château d’Yquem's reputation also owes much to the expertise and excellence of the estate teams. With a drastically limited yield, Château d’Yquem produces Sauternes wines whose rarity lends them great prestige.

To create this high-quality First Wine, the estate carries out an extremely rigorous selection process of the base wines, keeping only the most exceptional and elegant. The other base wines, which are still of very high quality, are set aside. Since 2014, Château d’Yquem has been bottling some of these wines as a non-vintage Sauternes which, up until now, has been available only to the estate teams. These Sauternes de Château d'Yquem are homogeneous and consistent. The 6 editions released so far are now available in an exceptional, unique case.

Each edition of Sauternes de Château d'Yquem is made from a blend of vintages. Proportions of different vintages are added gradually to the base vintage.

The innovative idea behind each edition of this non-vintage Sauternes was to create a consistent expression by gradually blending batches of different vintages into the base vintage. This is a wine best enjoyed in a relaxed, informal setting with food. It simultaneously offers fragrances of overripened fruit, so typical of the great “noble rot” wines, as well as fresh, almost lemony fruit, lending a beautiful brightness to the wine. The palate shows an ample attack, evolving refreshing, zesty flavors. Although this Sauternes wine is meant to be enjoyed in its youth, it nevertheless has a very nice aging potential. This mixed case, made of the 6 first editions, is an opportunity to taste the wine at different levels of its evolution. From the youngest and freshest Sauternes 6, to the most mature and charming Sauternes 1, experience an unprecedented tasting.


Other wines that Could be of interest to you