In 1997, the Baroness Philippine de Rothschild (then President of the Philippe de Rothschild company) and Don Alfonso Larrain (President of Viña Concha y Toro) signed a partnership. From this agreement was born Almaviva, an exceptional Franco-Chilean wine bringing together the great know-how of the French viticultural tradition and the unique Chilean terroir.

The name of the estate has been taken from French literature, in homage to the hero of Beaumarchais's play "Le Mariage de Figaro", Count Almaviva.

The Almaviva estate is located in the heart of the Maipo Valley, a prestigious wine region in Chile with magnificent landscapes. Along with the mansion and bodega, the Almaviva estate is home to a vineyard of 50 hectares, planted on an exceptional terroir. The traditional grape varieties of the Bordeaux region are planted here: Cabernet Sauvignon, Cabernet Franc and Carmenère.

Almaviva was the very first Chilean estate to adopt the French concept of chateau.

Today, the Almaviva estate has become an essential reference for the great wines of Chile around the world.

Almaviva | A Chilean Icon, Made with Bordeaux Savoir-Faire

Almaviva is a wine unlike any other, born from the happy marriage between traditional Old World savoir-faire and the exquisite New World terroir of Chile’s Maipo Valley. Jointly owned by prestigious Bordeaux First Growth Chateau Mouton-Rothschild and Chile’s legendary Concha y Toro, the Almaviva bodega produces a unique blend dominated by Cabernet Sauvignon, with Carmenere playing a supporting role. 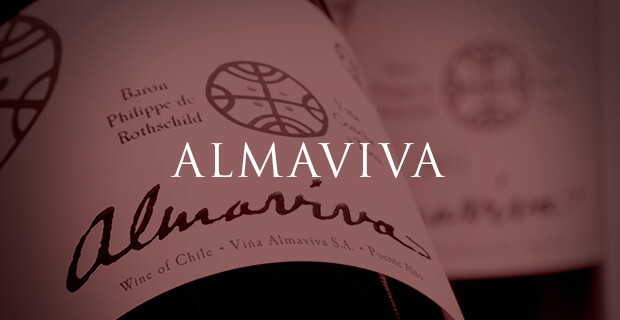 These wines are robust and powerful, yet elegant and generous, overflowing with luscious ripe cassis and blackberry, intermingled with mineral and earthy notes. The 2017 vintage was chosen by James Suckling as his “Wine of the Decade,” a reflection of the wine’s superior quality and its undeniable role in developing the international reputation of Chilean wines.

The Unique Success Story of Almaviva

In the year 1997, a meeting took place between Baroness Philippine de Rothschild (Chairman of the Advisory Board for Baron Philippe de Rothschild SA) and Eduardo Guilisasti Tagle (Chairman of Vina Concha y Toro SA). These two leaders in the world of fine wine signed a partnership agreement, culminating in a magnificent new creation: a Franco-Chilean wine by the name of Almaviva. The wine would be produced under the joint technical supervision of both partners. Today, Almaviva is the first estate in Chile to be managed by the French concept of “chateau,” whereby Chilean terroir and traditional French savoir-faire come together to produce a single exceptional wine.

In 1998, the partners commissioned famous Chilean architect Martin Hurtado to design the Almaviva bodega in Puente Alto, the highest part of the Maipo Valley in Chile’s Central Valley. Inaugurated in 2000, the Almaviva winery symbolizes the perfect marriage between design and functionality. The iconic curves of its roof evoke the undulating shape of the Andes Mountains, helping the winery blend seamlessly into the surrounding landscape. Meanwhile, the interior is decorated with symbols and artifacts representative of Mapuche culture.

The unique name of both the estate and of its signature wine comes from the character of the “Count of Almaviva” in the “Marriage of Figaro” by Pierre de Beaumarchais, later re-imagined as an opera by Wolfgang Amadeus Mozart. The wine label features this historical epithet written in the original handwriting of Beaumarchais himself. It also pays homage to Chile’s rich ancestral history with three reproductions of a Mapuche symbol for the earth and the cosmos.

Almaviva has enjoyed unparalleled international acclaim since its debut 1996 vintage, first released in 1998. More recently, the 2016 vintage received 95 points from The Wine Advocate critic Luis Gutierrez and was chosen as one of Wine Spectator’s “Top 100 Wines of 2019”. The 2017 vintage earned the maximum score of 100 points from James Suckling, who raved about its “wild and exotic” aromas of “blackberry leaves and iodine.” In January 2020, Suckling named the Almaviva 2017 as his “Wine of the Decade” for its overwhelming influence on the international reputation of Chilean wines.

The Terroir of Almaviva, in Chile’s Maipo Valley

The award-winning Almaviva is produced from 60 hectares of vineyard in Puente Alto, the highest area of the Maipo Valley in the Central Valley of Chile. The vineyard is planted at the foot of the Andes mountain range, at 650 meters above sea level, on the left bank of the Maipo River. The fresh breezes blowing down from the Andes help mediate the harsher temperatures of the summertime, allowing the grapes to ripen evenly. This high elevation also helps ensure sufficient temperature variation between day and night, resulting in a greater complexity in the wines.

The semiarid Mediterranean climate of Puente Alto, characterized by an annual rainfall of only 300mm, also helps ensure the perfect hygienic conditions for vine cultivation, with a complete absence of fungal diseases. Nevertheless, these dry conditions also make irrigation necessary. The soil is kept hydrated through a high-tech and very precise underground drip irrigation system.

The Almaviva vineyard is planted first and foremost with Cabernet Sauvignon, a grape variety ideally suited to the climate and soil of Puente Alto. The winery has also planted Cabernet Franc, Merlot, Petit Verdot and Carmenere – originally a Bordeaux varietal, which has made a new home in Chile, where it is today widely planted. These five varietals all go into the blend of Almaviva’s namesake wine, produced in a kind of Left Bank Bordeaux style, though the proportion depends largely on the conditions of each vintage.

The vines stretch their roots deep into the rocky, poor alluvial soils of Puente Alto, made up of a 50 centimeter topsoil of loamy clay upon a subsoil of sandy loam, gravel and rocks. These soils have been identified as perfect for the cultivation of Cabernet Sauvignon, as they drain water quite easily and impart a unique minerality to finished wines.

Winemaking at Almaviva, following the Know-How of Bordeaux

Following harvest at Almaviva, the grapes are brought to the bodega and hand-sorted on the Mezzanine or second level. They are then de-stemmed, pressed to release the juice, and moved by gravity from the reception area to the fermentation tanks on the first level of the winery. Fermentation takes place in two fermentation rooms which house stainless steel tanks of various sizes and is carried out parcel by parcel. After the must is cooled, the juice is left to macerate on the skins, in order to achieve the best possible extraction of color and aromas.

Malolactic fermentation then occurs spontaneously, after which the wine is transported by means of gravity to new French oak barrels. The barrels are housed in the Grand Chai of Almaviva for a period of 10 months before they are transferred to the Second Year Chai, where the wines complete the aging process. In total, the wines age for a period of roughly 16-18 months before being fined with egg whites (a Bordeaux tradition) and then bottled.

The wines of Almaviva, a signature style

Almaviva wines represent in the glass a happy marriage between traditional Old World Bordeaux savoir-faire and the extraordinary New World terroir of Chile’s Maipo Valley. Produced largely from Cabernet Sauvignon grown on the Left Bank of the Maipo River, these wines are created in the style of a Left Bank Bordeaux, but with Chile’s flagship Carmenere playing the part of Merlot in the blend. Roughly 18 months of aging in new French oak barrels lends a certain elegance to these wines, rounding out their tannins for a more refined finish.

The wines of Almaviva offer a bouquet overflowing with ripe cassis and blackberry aromas, seamlessly blended with mineral and earthy touches, hints of vanilla, black pepper and coffee. These are powerful yet elegant wines with a gorgeous acid structure and tannins, promising a fantastic potential for age.