For five generations, the Torres family has embodied values of excellence, tradition and innovation with each member guided by the same passion and desire: to produce great wines. The family...Read More

For five generations, the Torres family has embodied values of excellence, tradition and innovation with each member guided by the same passion and desire: to produce great wines.

Since everything begins with the love of the land, the love for the climate, the soil and the environment, Torres takes the utmost care in all stages of wine production that starts with selecting the best varieties for each terroir out of respect for the environment. Each with their own identity, Torres wines reveal the expressions of their great terroir while following strict specifications in the winemaking process.

Bodega Torres has received many awards, critical acclaim from the world’s greatest critiques and recognition as the most admired wine brand in the world from one of the wine industry’s most respected magazines in 2015, "Drinks International". Bodega Torres is one of the big successes in the world of wine with a name associated with iconic wines.

Familia Torres Wine | An Empire of Vines Built on Excellence

In the past century and a half, Torres has burgeoned from a small family winery overlooking the Vilafranca del Penedes railway station in Catalonia to a world-renowned Spanish wine brand. Since its founding, Torres has remained at the forefront of innovation in many aspects of winemaking: from the introduction of French grape varieties and techniques to Spain in the 1960’s to the restoration of ancestral Catalan varieties in the 1980’s and the ongoing quest to minimize environmental footprint and convert to a sustainable approach today. 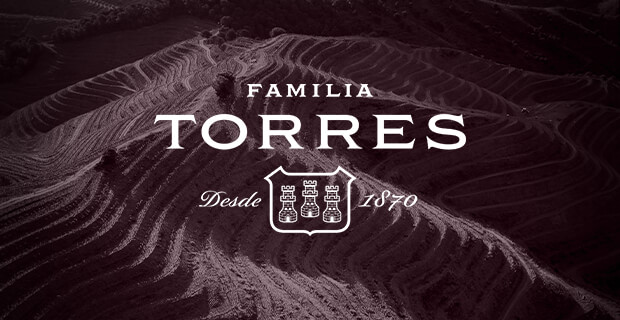 It is the 5th generation of the Torres winemaking family who now manages an empire spanning 3,200 acres of vines spread over the best DOC and DO appellations of the Spanish peninsula, along with California, Chile and China. The common threads running through the diverse Torres range is the family’s unrelenting quest for excellence and their drive to offer the most authentic expression of grape, terroir and vintage. This is a portfolio with something for everyone, a wine of quality to please virtually any palate.

The History of Torres Wine : One Legacy through Five Generations

While the origins of the Torres wine family date back as far as 1678, it was in 1870 that the Torres wine company was officially established by founder Jaime Torres Vendrell and his brother Miguel Torres Vendrell. The Torres family winery was constructed in front of the railway station of Vilafranca del Penedes, near Barcelona, in the Catalonia region of Spain. In 1906, Juan Torres Casals, the founder’s nephew, took over management of the company and one year later registered the trademark on « Coronas, » launching the wine of this name.

At this time, the Torres winery had enjoyed success, even making the move to the distillation of wine and brandy in 1928. However, in the Spanish Civil War of the 1930’s would cost the winery dearly. A mere three months before the end of the war, the winery was partially destroyed in an aerial bombardment of the railway station in 1939. It was Miguel Torres Carbo, who took over at the helm of the family business in 1932, who led the recovery of the company, rebuilding the winery in 1942 and launching the sale of Coronas as a bottled wine. Just 12 years later, Torres released another wine, named “Sangre de Toro.”

Fresh out of his oenology studies in Dijon, France, the son of Miguel Torres Carbo, Miguel A. Torres, joined the family company as Technical Director. From early on, Miguel A. Torres used what he had learned in France in his innovative approach to winemaking at Torres, including the introduction of the cold fermentation technique and stainless steel tanks in the 1960’s. He created the Vina Sol label, registered in 1947.

By 1964, Miguel A. Torres had also introduced foreign grape varieties to the family’s vineyards in Spain, which at that time was very rare. He began planting Cabernet Sauvignon on the Torres Mas la Plana estate in Penedes and Chardonnay in their Castell de Milmanda estate in Conca de Barbera. The Torres wine portfolio continued to expand, with the debut vintage of the mostly-Cabernet Gran Coronas Etiqueta Negra in 1970. This first vintage would enjoy unprecedent success at the World Wine Olympics in Paris (organized by Gault & Millau magazine), even defeating several of France’s top fine wines.

If the 1960’s were about winemaking innovation at the Torres winery, the 1970’s were about the international expansion of the Torres family. Marimar Torres moved to the USA in 1975, significantly increasing the presence of the family’s wine in this growing market. In 1979, the Torres family expanded to Chile, setting up the very first foreign-owned winery in the country and importing stainless steel tanks and oak barrels from Spain. In 1982, the family purchased vineyard land in Sonoma County, planting Chardonnay and Pinot Noir and establishing a winery to be managed by Marimar Torres. The very first bottling, a 100% Chardonnay, was produced in the 1989 vintage.

Meanwhile, back in Spain, Miguel A. Torres returned to the winery after spending one year studying in Montpellier, and in 1983 began a project aimed at recovering the ancestral varieties of Catalonia. In 1991, he would also take over as President of Torres Wine, following the death of his father. In the decades that followed, Torres continued to further expand their portfolio with a series of acquisitions. The winery launched Salmos, its first Priorat wine, in 2007. In 2009, Torres expanded into the Rioja appellation with the production of the red wine Altos Ibericos. In 2011, Torres launched the wine Verdeo in DO Rueda and in 2014 they purchased a winery in Villafranca de Duero in the Rueda area.

In the past few decades, Torres has also experienced a boom in international recognition. King Juan Carlos I visited the winery on the occasion of its 125th anniversary in 1995. Decanter named Miguel A. Torres “Decanter Man of the Year 2002.” He also received the Wine International Magazine Personality of the Year award in 2005, was selected as the most influential Spanish vine grower by Decanter in 2007 and received the Wine Enthusiast Lifetime Achievement Award in 2013. The Torres winery itself was named “Most Important Winery in Spain” by Wine Spectator in 1999, Best European Winery by Wine Enthusiast in 2006, Green Company of the Year by Drink Business in 2010 and Most Admired Wine Brand in the world by Drinks International in both 2014 and 2015. These are just some of the many accolades that the Torres brand has earned over the past few decades.

Torres Wine: An Empire of Sustainably Managed Vines around the World

Today, the Torres headquarters is situated in the town of Vilafranca del Penedès, just south of Barcelona in the Catalonia region of eastern Spain. The Torres family boasts an exceptional legacy: over 1,300 hectares (3212 acres) of its own vineyards around the world and a presence in over 150 countries.

The Familia Torres range of wines comes from some of the best appellations of the Catalonia region of Spain, including the DOQ Priorat, DO Penedès region, DO Costers del Segre and DO Conca de Barbera. These wines are produced in a wide range of grape varieties in styles in one of three wineries: in Pacs del Penedes, Purgatori and El Lloar.

Additionally, the Spanish portfolio of Torres includes a 100% Tempranillo named Les Pisadas in the La Carbonera winery in the DOQ Rioja; a Crianza and Reserva Tempranillo and white Verdejo wine from the high-altitude vineyards of the DO Ribera del Duero; a Verdejo from the Magarin vineyard in the DO Rueda; and an Albarino in the DO Rias Baixas of Galicia.

At Bodegas Torres, the health of the vineyard is taken very seriously, leading to a sustainable approach to the ensemble of company operations. The Torres & Earth program, launched in 2008, seeks to adapt the activity of the winery and vineyards to climate change and reduce the company’s carbon footprint.

Between 2008 and 2020, Torres managed to reduce its carbon footprint by 30%. Torres has also invested in switching to renewable energy sources (today accounting for 25% of total energy consumption), introducing sustainable transport, embarking on a grand reforestation project, and collaborating with universities on research into various approaches to climate change.

As an ongoing commitment to sustainability, Bodegas Torres team continues to set ambitious goals for the company. They are now aiming to cut their total emissions by 80% before 2050.

Torres Wine: Winemaking and Style through a Varied Portfolio

With a portfolio encompassing so many appellations, vineyards and grape varieties, it is impossible to generalize about the winemaking style of Bodegas Torres. Instead of pursuing one specific style, the wines are produced based on the specific characteristics of the grapes and their terroirs of origin.

For example, the Torres Mas de la Rosa is produced from grapes grown by 80-year old Garnacha (Grenache) and Carignan vines in the DOQ Priorat and aged in French oak barrels for 16 months to produce a robust red wine with gorgeous black fruit notes and a certain minerality from the appellation’s llicorella schist soils. This is a fantastic, high quality wine from Priorat wine to pair with grilled venison or lamb chops.

Meanwhile, in the DO Penedes, Familia Torres produces a magnificent Cabernet Sauvignon and Tempranillo blend named Gran Coronas, which is aged for 12 months in French oak barrels (30% new oak) to reveal a dark red wine with delicate spicy and balsamic nuances.

Their Mas La Plana, also from DO Penedes, blends Cabernet Sauvignon from various vineyard parcels, aged in 85% new French oak barrels for 18 months. This is a wine with a stunning list of accolades, having received 107 different awards since its debut vintage in 1970. Within the Familia Torres portfolio, this wine represents the innovative idea of Miguel A. Torres in the 1960’s to introduce French varieties to Spanish terroir. These red wines from Penedes will pair nicely with hearty winter dishes, such as a stew of root vegetables and slow-cooked oxtail.

The Familia Torres Forcada offers an expression of DO Penedes in white. This cuvée symbolizes the Familia Torres project aimed at recovering the ancestral varieties of Catalonia, which are believed to have disappeared after the phylloxera epidemic. This is a truly unique bottling, revealing an impressive intensity on the nose and surprising freshness on the palate. The Forcada cuvée offers beautiful floral fragrances and notes of fresh grass and Mediterranean herbs on the nose, making it the ideal pairing to a wide range of dishes, to be enjoyed year-round!