When Jean-François Ganevat returned from Burgundy to take over his family’s estate in Jura in 1998, he brought with him a Burgundian obsession with terroir. With the help of his sister Anne, he set...Read More

When Jean-François Ganevat returned from Burgundy to take over his family’s estate in Jura in 1998, he brought with him a Burgundian obsession with terroir. With the help of his sister Anne, he set about reorganizing his vineyards, drastically lowering yields, converting to biodynamic and eliminating the use of sulfur in the winemaking process. Today, the Ganevat vineyard spans 32 acres, planted with Chardonnay and Pinot Noir, as well as some Jura varieties you have heard of (Savagnin, Poulsard, Trousseau) and others even the most practiced wine connoisseurs have never tasted. The estate’s remarkable portfolio includes over 40 different wines, each with its own unique personality, grape variety and terroir expression. Some of these wines follow the rules and classified under the Cotes du Jura AOC appellation. Others break them and are declassified as “Vin de France.” However, they all have in common a vital life-force, a vivacious energy and purity which has earned them cult status. These are wines that transcend their appellation, elusive and idiosyncratic bottlings that have taken the wine world by a storm. 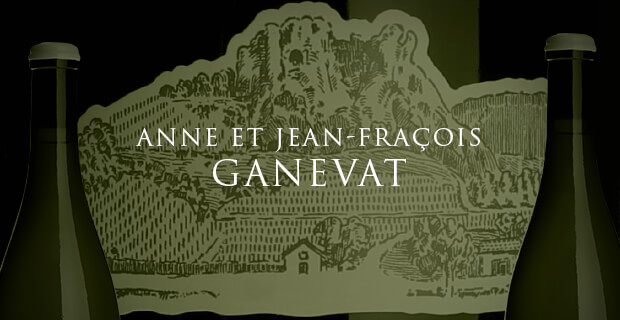 The Story behind the Anne et Jean-Francois Ganevat Estate

The story of Ganevat wine begins in 1998, when Jean-Francois Ganevat and his sister Anne took over their family domaine in the Combe de Rotalier hamlet of Jura. Having trained for 9 years in the Beaune region of Burgundy wine producing area and then honed his skill as Cellar Master at Domaine Jean-Marc Morey in Chassagne-Montrachet, Jean-Francois returned to Jura to become the 14th generation of his family to run the family estate. His objective, from early on, was to apply Burgundian winemaking philosophy to the native grape variety of Jura and to produce wines with world-class quality and pure terroir expression. He gradually expanded the estate to the 32 acres of vines it occupies today, keeping the old vine plantings of Jura’s ancestral varieties, even those which are not allowed in the AOC Cotes du Jura appellation: Gros Béclan, Petit Béclan, Gueuche, Seyve-Villard, Enfariné, Corbeau, Portugais Bleu, Poulsard Blanc and Argant.

Since 2013, Jean-Francois has also purchased fruit from 10 trusted wine growers through a négoce company he established with Anne to help these growers (many of them his friends) cope with lowers yields as well as climate events, like hail and frost. The siblings are both actively involved in the harvest of these grapes, frequently visiting the wineries and giving their advice. In 1999, the entire estate was converted to biodynamic wine viticulture and in 2006, they also completely eliminated the use of sulfur to produce natural wines. These changes have resulted in cleaner, fresher and lighter wines with purer terroir expression.

Today Jean-Francois, or “Fanfan” as he is affectionately known by those around him, produces a stunning array of over 40 different cuvées, each with its own unique personality. Along with his Cotes du Jura classics made from Chardonnay wine, Pinot Noir, Savagnin, Poulsard and Trousseau, he also crafts a huge number of Vin de France bottlings, blending rare indigenous varieties of Jura and fruit from various regions of France. The “magical alchemy” at the source of these wines has achieved world-wide cult status and the natural wines of Ganevat are today considered some of the finest representations of the Jura region.

The Ganevat winery is based in the picturesque hamlet of La Combe de Rotalier in the remote Jura region of eastern France. Nestled between the Burgundy region and Switzerland, the landscape of this region is distinctively alpine, characterized by rolling, green hills, where the vines are planted at various altitudes and exposures. The Jura region is home to more than 40 indigenous grape varieties, among them the more known Savagnin, Trousseau and Poulsard, and others which even the greatest of wine connoisseurs have never tasted. The estate is dedicated to casting the spotlight on these native varieties, cultivating 45 of them in total.

Inspired by his time spent in Burgundy, Jean-Francois Ganevat treats each one of his many micro-terroirs as its own entity and vinifies each parcel separately. Many of his vines are today over 50 years old, though some are already over 100 years-old “vieilles vignes”. They grow in a complex mosaic of schist, marl and chalk soils, with yields kept low in order to ensure concentrated fruit. The viticulture is 100% biodynamic with only natural compost and herbal infusions used to nourish the vineyard soils. Actions in the vineyard are planned in accordance with the lunar calendar and cover crops are planted to stimulate the vine’s ecosystem as a living, breathing entity.

Along with fruit harvested manually from his own vineyards and those of his 10 local collaborators in Jura, Jean-Francois also sources grapes from Beaujolais, Savoie, Cote-Rotie and Alsace to create fascinating blends under the Vin de France appellation.

Magical Alchemy at a Winery in Jura

At the winery, each parcel of wines is vinified separately, depending on the specific personality of the plot, the grape variety and the vintage. While there is thus no way to generalize about winemaking at the estate, there are some common techniques used. The white wines are typically fermented in whole clusters with no sulfur dioxide added during the winemaking process. And exclusively naturally-occurring indigenous yeasts used. They all go through malolactic fermentation and are aged, often on lees for a period of two years, in 300-liter and 400-liter demi-muids or 228-liter barrels.

Meanwhile, the red wines are often meticulously destemmed by hand with scissors before a very long fermentation, although carbonic maceration is carried out on the Beaujolais. The reds typically age for a period of one year in large, old oak vats. Importantly, there is no new oak used at Ganevat. Instead, the wines are aged in neutral, old oak barrels. Since 2014, the winery has also been experimenting with unlined clay amphoras from Italy, which bring a certain salinity, freshness and purity to the wines. Unlike many of the traditional “vin jaune” producers of Jura, Jean-Francois tops up his barrels during the aging process in a style known as “ouillé” in order to avoid oxidation, as he believes the latter masks the expression of terroir. The wines are bottled without sulfur, fining or filtration.

A Dazzling Lineup of Natural Wines from Jura

Today, the estate produces a remarkable portfolio of over 40 different wines, each with its own unique personality, grape variety and terroir expression. Some of these wines follow the rules and classified under the Côtes du Jura AOC appellation. Others break them and are declassified as “Vin de France wines.” However, they all have in common a vital life-force, a vivacious energy and purity which has earned them cult status. These wines have been described by wine lovers around the world as ethereal, idiosyncratic and otherworldly.

The Anne et Jean-Francois Ganevat Vin de France “J’en veux encore”, whose name translates to “I want more” comes from a blend of 18 different red and white grape varieties which are native to the Jura wine region, including Corbeau, l'Enfariné, Gouais, Gueuche, Portugais Bleu, Petit Beclan, Beclan, Argant and Seyve-Villard. The exact grape varieties and their proportions vary according to the vintage. This is a very smooth wine with rich red and black fruit aromas on the nose and slightly spicy, earthy nuances blended in. The palate offers plenty of bright fruit flavors and a refreshing acidity. This is the ultimate food pairing wine, which will shine with a wide range of dishes year-round.

Finally, the Ganevat Vin de France “Madelon” bottling is made with around 50-60% Gamay from the Morgon cru appellation of Beaujolais, blended with native Jura varieties and aged for 10 months in large oak foudres. This is a bright and lively natural red wine with red berry fruit aromas, along with dashes of cinnamon. A perfect Thanksgiving wine that pairs effortlessly with food.