A Rich and Melodious Chardonnay by Pierre Lurton

The property
Built in 1782, Chateau Marjosse is located in Entre-deux-Mers on the right bank of Bordeaux. Initially owned by the wine merchant Bernard Chenier, Chateau Marjosse was acquired by the Deleuze family, who in 1990 ceded a few plots for rent to Pierre Lurton. In 1992 Pierre Lurton, who grew up in Chateau Reynier, right next to this magnificent Chartreuse, moved into a second home at Chateau Marjosse and over the years successively purchased several rooms from the Deleuze family. In 2000, Pierre Lurton constructed an ultramodern cellar containing more than 40 cement vats, and in 2013 he became the sole owner of the entire vineyard, as well as the Chartreuse.

The vineyard
Spanning 40 hectares, the Chateau Marjosse vineyard is planted in exceptional clay-limestone soils. Home to both young and old vines, some of which are centuries old, the vineyard is planted with several grape varieties, including Merlot, Malbec, Cabernet Franc and Cabernet Sauvignon, used to produce the Chateau Marjosse red wine. The vineyard dedicated to the production of the white wine of Marjosse covers 12 hectares, and is home to vines aged 25 to 75 years.

The wine
The Anthologie Cuvee Chardonneret bottling of Chateau Marjosse is part of the sub-brand "Anthologie", a new venture by Pierre Lurton aimed at producing exciting single-vineyard expressions of estate's magnificent terroir. In 2017, Lurton and his newly hired winemaker Jean-Marc Domme created their very first micro-vinifications of small-batch wines from carefully selected parcels of the property. 2018 was the first commercial vintage of these wines. The Cuvee Chardonneret is a lively and melodious wine, just like the goldfinch after which it was named. The 2018 is a début vintage revealing a very delicate nature, as well as some oceanic accents. This single-varietal Chardonnay is made with grapes from vines grown in clay-siliceous soils on limestone rock. The yields here are very low, only 20 hectoliters per hectare. Both the fermentation and the maturation (for 10 months) take place in Bordeaux barrels, of which none are made with new oak.

The blend
The Anthologie Cuvee Chardonneret 2018 by Chateau Marjosse is made from 100% Chardonnay.

The tasting
Color
This wine displays a pale yellow color in the glass.
Nose
The nose is quite discreet at first, showing great elegance and complexity after the glass is swirled.
Palate
This Chardonnay expresses itself fully on the palate, revealing a mouthwatering minerality, along with notes of citrus and hazelnuts. The finish is characterized by fine toasted touches. 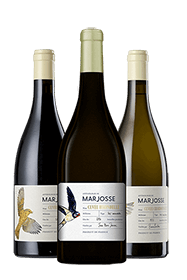